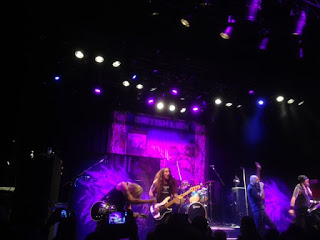 British Lion and Voodo Six might not be that known to many, but Steve Harris is. This was one evening of his band British Lion in de Boerderij. This meant that in spite of unknown bands this was not an underground affair, but a gathering of fans of Iron Maiden wishing to see their hero on a small stage for a change. Support act were Voodoo Six. I knew their name, not their music and did not recognize them on stage. Entering with an open mind it turned out that Voodoo Six are a very nice live band. Playing old fashioned hard rock I also sometimes heard similarities with The Quill in their music. The vocalist had a good voice and the band presented us mainly mid tempo hard rock songs. Nothing earthshaking here, but one of the better support bands I saw recently. Harmless hopefull heavy rock. 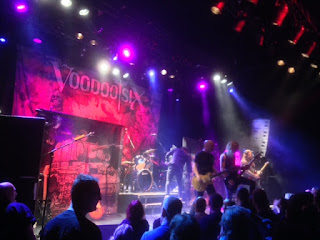 Of course most people came to see Steve Harris That he plays in a band called British Lion is secondary. I do not have their debut album, but recall critics mainly writing about the vocalist. Some internet searching made me understand these doubts, but Youtube can never be the judge of a band and seeing them live is the only way. So when the band came on I focussed on his singing and actually at the start it was not that bad. A Classic Rock voice, not among the greatest but suiting the mainly old fashioned hard rock. The band themselves were good and both guitars came alive at times. The tall guitarist reminded me very much of Arjan Lucassen in his Vengeance days, but then 30 years older. He was the animator on stage. Turns out he was touring guitarist with The Outfield, known from their eighties hit "Your Love". (Josie's on a vacation far away, you know I like my girls  a little bit older).  And Steve Harris? well he seemed to enjoy this small venue. Being used to arenas he was now right in front of us. Downside is that to me he looked some 10 years older then when I saw him in Sevilla this summer. He also did use the opportunity to go very West Ham in outfit, which stood out more with less special effects around him. His Whale Oil Beef Hooked shirt does become funny when speaking out fast. The songs finally did convince me. This is just the kind of hard rock that made me start liking the music some 35-40 years ago. The Maiden references mainly came from the several whoo-hoo-hooaas we were asked to shout along. Musically UFO commercial Rainbow and such were a reference as well. Naming UFO it was Let it Roll which was the famous cover played in the encore. So those who came to see some Maiden songs went home unhappy. For me the UFO song also was a tipping point. I actually liked the show and songs. The vocalist did get weaker through the set though and when he arrived at Let it Roll I remembered Phil Mogg only a few weeks ago on the same stage.  No comparison really, so I did not get the album afterwards. 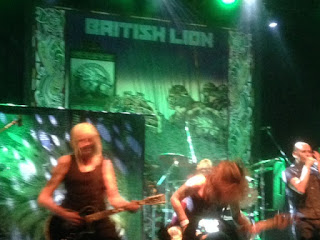 I might seem disappointed with the vocalist, but this was never annoying. The music played tonight is very much aligned to my youth and enthusiasm was all around. I shall go see them again if either band is in the area. Still on possibilities it would have been nice to me if Steve Harris would have blended his love of Prog Rock in his project. Often citing his preferences it could be a nice option. As an example he can listen to Biff Byford who not long ago released a fine progmetal album with The Scintilla Project. From Maiden I now saw Bruce Dickinson solo some times and Steve Harris with British Lion. Number one on my wish list still would be a reunion gig of White Spirit futuring Janick Gers. Maybe the least respected Maiden band member, but to me the best alternative album by any of them (even if released way before he joined Maiden).
Posted by erikprogtricolor at 17:12