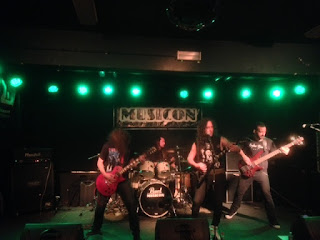 Sodomizer closed a month of many Latin American Metal bands in the area. While I missed Nervochaos, Nervosa and the Cavalera brothers, I much liked Apocalyptic Raids and Whipstriker, Krisiun and still am confused by what Lluvia presented some weeks ago.  As good Carioca I always try to see Brazilian bands when near to home, but due to work trips I managed to miss Sodoimizer the previous times they played The Hague. This time all was to be different as recently I learned that a place to sleep after the show was looked for to receive them. Being more than pleased to help out this show started at Central Station, where I picked them up end of afternoon. While I expected to practice my Portuguese we got the Berlin international band so I also could train my Italian, German and Polish. Having a band over is always great, as you get an insight on the other side of the coin and what brings a show together. With Sodoimizer and crew turned out to be very nice people this was for me a memorable show once again. 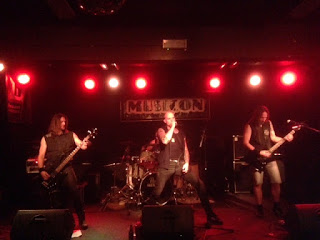 When returning to Musicon we first had two support bands, and this sounds much more negative then intended. Defazer opening means seeing the best Thrash Metal band from the The Hague area on stage again. For me it is time to get an album out enabling me to recognize the songs and for them to grow bigger. The songs and presentation definitely are ready for this and as previous times I again highly liked their show. Hereafter we got SplinterBomb from Den Bosch. They are being announced somehwat direspectful as that other band from Legion of the Damned's guitarist Hein. What we noticed fast is that their groove thrash is slow and heavy and the vocals don't go clean. While I thought them a good band, I must say that I felt a lack of tempo to grab the audience. Even a Sepultura cover did not change much to that. 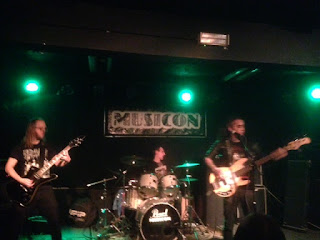 Sodomizer were setting the stage and I looked forward to my by now friends on stage. As I did not see or know them before I can state they outdid my expectations. For their style I read Speed Devil Metal and Speed Horror Metal, which both does not mean a lot at first reading. Seeing them on stage as well as hearing their albums I did get it now. The horror sound is around in both lyrics, but also effects. While I always prefer the technical site of Death or Thrash metal I was pleased to see the instrumental work was impressive and very fast. Long instrumental parts gave Max enough time to excel on guitars. The hour or so on stage passed fast and all seemed to love the show. For me it was great to see them before, after the show and at breakfast to get a small idea what touring means. They won a fan and I shall be there when they return. When dropping them off the next day I tried to surprise with a mellotron horror rock album by Morte Macabre, turned out Fabiano already knew the album. Music lovers in general and a great live band, so go and see them when they pass near your home. 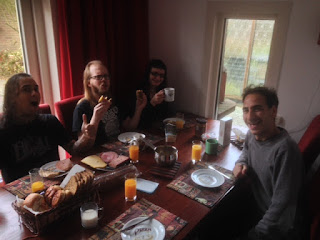