The Reticent - On the Eve of a Goodbye 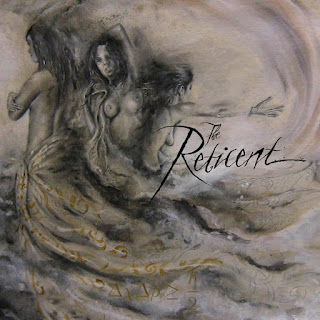 The Reticent was until now a completely unknown band to me. Starting at the beginning it was the Angry Metal Guy  who set me on the what turned out to be very right track. I can recommend this site as he covers a range I pretty much appreciate as well. Looking at his last albums of the month I run into several favorites of mine: Vektor, Insomnium, Whiterscape at the heavier end, but also Our Oceans and Haken on the calmer part of metal. The Reticent turns out to be the work of Chris Hathcock, also drummer at Death Metallers Wehrwolfe (?). In the Reticent he plays all instruments and sings all parts. When you hear the album it turns rather amazing  how one person is capable of playing all these instruments so well, while at the same time touching all vocal ranges  from mostly clean to some screams and grunts to accompany the storyline.

On the Eve of a Goodbye is a concept album.This is in Progressive rock and metal not a unique way to transmit a message. Releasing a concept album can have its traps though. Some work beautifully and become the classic albums of these bands (Operation Mindcrime, A Pleasant Shade of Grey, Scenes From a Memory, Misplaced Childhood, Light of Day..., Crimson and my favorite Opeth album Still Life). Others run the risk of being too pretentious and loose sight of the power of individual songs. Examples a plenty, but I won't mention names. Chris took an extremely personal experience to base this album upon. He describes the last 24 hours of Eve, before she commits suicide and he is left speaking to her ghost. The album is dedicated to Eve M. Tiger who passed away 15 years ago. This tells something on the time it took to put all thoughts together and being able to put this experience into music. Never before did I hear a concept album, where the feelings are so genuine and sincere put alive to music. Final numbers The Decision and Funeral For a Firefly are so emotional, that only the complete insensitive ones or total machos can not hear the despair, pain, anger  and sadness in the voice of Chris. The overall result is a very emotional album which should be heard in one go, preferably over headphones and reading along to the lyrics.

Coming to the music a short description can be Progressive Metal. In reality there is so much more to it, as at parts when the story gets heavy the music does too and I must say his grunts and screams are impressive. On the other end we also get quiet breaks with piano parts as well as small sax, trumpet and trombone support. With the overall flow of the story being an emotional rollercoaster I am convinced that grunt haters should not be scared by the heavy vocals nor should extreme metallers be afraid of the occassional wind instruments. The album touches several genres and at parts I think I recognize a band. Without really being able to pinpoint one reference for such a diverse album I give it a try. Imagine Leprous at their peak (Bilateral)  releasing a concept album blending in some Dan Swanö, Soen and Green Carnation. Yes it has to me definitely a Scandinavian feel to it, even being American. As I fail to describe the beauty of this album in detail, the only solution is pointing people at the right direction. Start searching for the band on their website or Heaven & Hell records bandcamp. (note song 1 is one of 4 short spoken word parts, helping the story but musically not representing the album). For those more into clips, several songs can be found on YouTube, next to some interviews on the making of this album. I bought the CD directly from the website and received it with again a very genuine letter of thanks. My blog always has the target to raise the interest of one person in an album I heard or a show I saw and support the bands by that. This time I strongly recommend all metal lovers listening to this album on the internet and like me purchase it for yourself. I am almost sure that this album will in the years to come be seen as a Classic in its genre. For now I am going to their webstore and purchase their previous album together with a T-shirt of this one. Thereafter I shall go to the PPE group and plug this band. What a sensational release. The Legacy of Eve now includes one of the most beautifull concept albums ever made. I guess this was exactly the point Chris wanted to make and man was he succesfull doing so.
Posted by erikprogtricolor at 14:27