On a Sunday afternoon driving to de Baroeg in Rotterdam means metal. De Baroeg is a dark place in the south of Rotterdam which oozes metal. Perfect sceneray for a straight forward Heavy metal show. Openers were Enforcer from Sweden, who might have got the largets response of the day, also helped by a recent release which got good reviews. I enjoyed their show with Heavy Metal as it is being played in its purest form. Closer of the afternoon/evening was also from Sweden Grand Magus. A doomy power trio which played good songs, best compared with a slightly less impressive version of The Quil (thanks Hans) 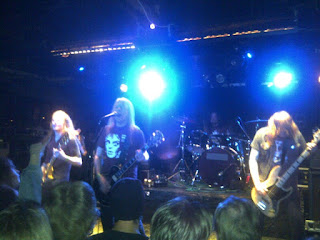 My main reason was the fact that  thirty something years after its release I finally could see a live performance of one of NWOBHM's most Classic albums being performed live. After my rediscovery of the NWOBHM I bought their 2012 release As Above, So Below. This album also showed the renewed relevance of Angel Witch and came back twice in the set. Of course the core of the set was focussed around the debut album and from Atlantis through Confused, Burn the White Witch, Angel of Death we ended with the Classic title song Angel Witch. This song is amongst the most representative ones for a whole genre, so obviously the roof came down and the Baroeg went banging, jumping and screaming. One to scratch of the list, songs you should see live even if only once.

My expectations were high for this show and they were easily met. The playing was great and the sound met with the level of the show. Main question after the show to me was, where did things go wrong?  The debut album matches Iron Maiden's Killers or Saxon's Wheels of Steel in my view.
Let's put it down to unlucky, but after the live show the album only lives more and shows how relevant classics like these still are. Thanks to the revival, I'm hoping to see more shows like this soon.

Posted by erikprogtricolor at 22:02 No comments:

Last December Tiago was supposed to play at the drumdag from the Scheveningse Muziekschuur. Unfortunately due to a dislocated elbow he had to cancel last minute. Today we did need to film an audition for school and as proud dad I wanted to share the result.

It's the Final Countdown!
Posted by erikprogtricolor at 19:57 No comments: 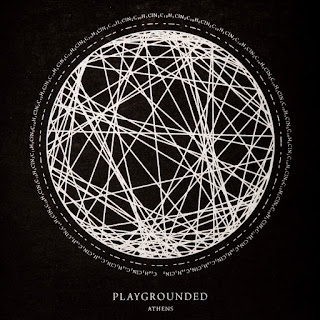 One of the many good things about Progpower is that you meet nice people at the festival. Since we all share variations on the same musical theme, this can result in tips over the email on new founds you would normally have missed. In this respect I received a tip from Andrew on Playgrounded and their debut CD Athens, which he thought I might like quite a bit. An right he was. (Read his much more informative review on Ave Noctum)

Playgrounded are from the beautiful city of Chania on Crete and play an emotional sort of progressive metal/rock. On my pre-purchase internet search I ran into names of Tool, Mastodon and Anathema. I can see where this is coming from although Playgrounded are the lighter part of the first two references. A band that came to mind with me with the first listens was A Liquid Landscape, but then a heavier version of them. These songs also are build up around atmospheres in general slowly moving forward, although Seessaw Snap enlightens us with some heavy outbursts.

The CD lasts only 33 minutes with 5 songs on them, but this introduction makes me eager to hear more of this band. Great musicians, good songs and if promoted well enough I can't see why they should not get worldwide exposure through the now 3 Progpower festivals again. Apart from that the fact that they come from Chania, which gave me the chance to add a holiday picture from 2 years ago. 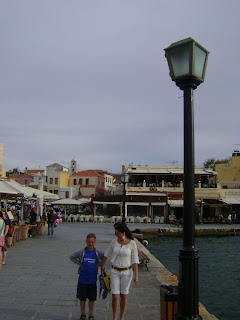 Posted by erikprogtricolor at 10:19 No comments: