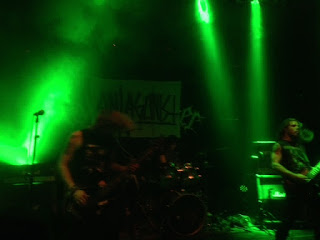 Brazilian underground metal bands playing in the area, makes me usually more than a bit interested. Having two on one evening in Leiden made me therefore return to de Nobel. Both bands were before unknown to me. Whipstriker play Mayhemic Speed Metal and Apocalyptic Raids call their style Metal, but are named after a Hellhammer song. As support they had a German band Antagonist. When I entered they almost started and the first outstanding point on stage was the banner with their logo. Handpainted on a white sheet we really were up for an evening of old school. The Antagonist turned out to be a trio in a rush. In the more or less half hour they got we got ten songs presented. All being fast and furious, but musically the band did impress. Vocals were mainly harsh coming from the drummer, but at times the bass player and even the guitarist took over. This is live music, no nonsense and no tapes. Good warm up for the Brazilian wave to follow. 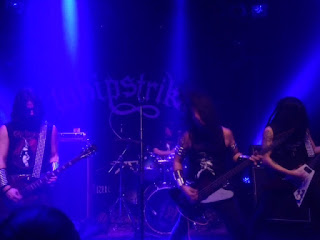 While the Poster and website made us believe Whipstriker were headliner, they played as second band. Actually I only found out after their set, when the banner came down. Mayhemic Speed Metal turned out to be eighties proto-extreme metal with also a healthy does of Motorhead blended in. Admitted I was in the eighties not the biggest fan of Venom, Hellhammer, Celtic Frost, Bathory and the likes. Nowadays this music is way less extreme than thirty years ago and seeing Whipstriker live on stage was sheer brilliance. This was filthy, dirty, kick-ass metal. Similar to the opener, they bulldozered on and most of their songs were around the three minutes as well. Energy coming from the stage, leather studs with pins on the stage and a few beers down made this a very good live experience. I got their last album Only Filth Will Prevail and glad to know one more real Brazilian underground band. 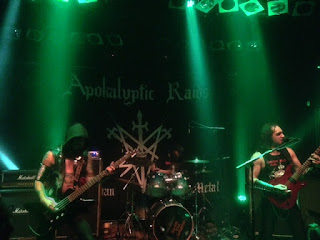 Apocalyptic Raids were on last and turned out to share the drummer with Whipstriker. The trio uses aliases on their CD and while Necromaniac is definitely still the guitarist/vocalist I believe Slaughterer and Hellpreacher might not have been present on stage. Well I got my information from last full album Vol. 4 Phonocopia, which I bought and dates from 2010. Stylewise they were following up nicely after Whipstriker. Less Motorhead though and by playing the song they are called after more Hellhammer I guess. The bass player also asked enthusiastically for reactions and they got most of them from the audience. What was already a great night back in time turned slightly legendary when they were finished. The set was over, they thanked us and the drummer started taking his kit apart having his cymbals off already. The crowd  might have been small, but obviously we all enjoyed the evening and chants for more would not stop that fast. So the cymbals were screwed back on and the band played another song. when this one was finished the bass player took off his guitar and showed signs of leaving which was overruled by the other two just starting a final song. Great spirit and that is exactly why we love these underground shows, where there is place for spontaneity. A great and early evening in de Nobel ended on a high. Thanks to THHMA, Slowrunner Records and Headbangerzineandgigs for bringing this tour to Holland which made the Carioca in me proud.
Posted by erikprogtricolor at 17:57