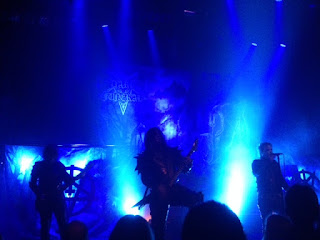 Swedish Black Metal and Death/Thrash from Brazil, more interesting to me than watching Europa League on Television. Starting with the Brazilians, let me explain why I do not know this band from my past even if they were formed in 1990 already. During my Brazilian years (1997-2000) internet was not as organized as today on concert agenda's. Further I had several specialised CD stores where flyers would be placed. Still these shops mostly were into foreign bands. Until today when returning to them it remains hard to find albums from underground Brazilian bands. Finally I lived in Rio and that is the capitol for Progressive Rock  (the annual Rio Art Rock festival brought me some underground prog bands from Latin America). For Heavy Metal and more extreme Sao Paulo is really the place to be in Brazil. The only time I visited SP those years, was on a bustrip with Hard & Heavy stores to Monsters of Rock. Openers there were Korzus and Dorsal Atlantic next to some openers at gigs in Rio the few Brazilian bands I did see play live. This month I can make up for quite a bit of that loss, as THHMA and Doomsday Celebration bring within weeks 5 Brazilian underground bands to the region. I couldn't make it to Venom last Sunday, so Nervochaos I missed. Krisiun was not going to be the next one missed and it turned out the decision music over football was the right one yet again. 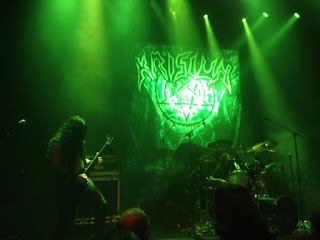 Krisiun are a trio from Sao Paulo and play Death Metal, while vocals are more thrashy. After their first song they explained that they play loud and fast and they were not wrong. The drums were great and main role (as often to me) were the guitars played by Moyses. He filled the songs with fast melodic solo's. The three brothers mainly bulldozered onwards and only a few times became slow and heavy. Funny to hear someone talk about old school and going all the way back to 1998. Makes you realize that your getting bloody old (yet banging still). Before the end there was a tribute to Lemmy in The Ace of Spades. As everybody can hear that song always, it did result in the most enthusiastic response from audience.  A good show from a strong band. One comment on the presentation though. For such an experienced band the inbetween song banter was disappointing. Thanking the audience four times for keeping the underground scene alive might just pass, but after every song asking for more audience noise followed by I can't hear you, is just too much.. A bit more variation here might be a suggestion. 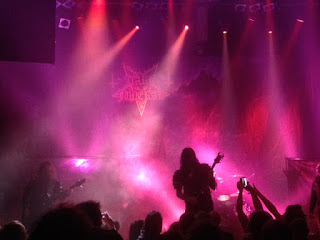 Variation during the evening was guaranteed by the diverse package. Deserted Fear cancelled and I do not know them, but the Black Metal from Dark Funeral was a nice change in style. To start the stage looked awesome. Taking the cover of Where Shadows reign forever, it came close to the  Maiden or Dio stages in the eighties. The band coming on in their uniforms added to the scene and we were watching a show. Musically at times I thought the audience might have just fitted in a sold out Baroeg, adding atmosphere, but the stage in de Nobel justified the show  (or vice-versa). Unfortunately the limited camera on my phone does not do justice to this. I am not overly familiar with Dark Funeral's back catalogue, but to me the build up of the show seemed good, closing with the title track of their last album.  To me bands like Dark Funeral left the underground and should be able to reach mainstream metal audiences both musically and show wise. Then again I might be wrong as the screaming vocals need a refined taste. Nobel meanwhile turned into a concert hall with lots of metal in its various forms and for me Doomsday Celebration and THHMA can go on booking these bands. Shall try to be present as much as I can.
Posted by erikprogtricolor at 13:44