Just before year end I can present my favorite shows of the past 12 months. When going back through the year I sadly found out that the list of missed shows (mostly due to work trips) is extremely impressive this year as well. The following shows shall not make my top 10 since I was not there while I should have been: ProgPower Europe, Headway, Marillion Weekend, Fates Warning, Kingcrow, Symphony X, Attacker, Savage Messiah, Salem and countless others. Still I did visit the below list and building up to number one I realized the year was not that bad after all.

10. Pendragon - Boerderij Zoetermeer May
High quality as always. With no new material released visiting some surprising songs though. They shall never disappoint.

9. Haken - Boerderij Zoetermeer September.
After several listens I don't think their new album is their strongets, but this show was definitely the best I ever saw from them. Not knowing the new songs yet the performance impressed and musically they remain amazing. Back for Progdreams next year another guaranteed good show.

8. Galahad - Theater Alphen aan de Rijn September
Performers who enjoy themselves on stage and give defintely more of a show than your average Prog band. The outfits, the poses and most of all the songs. Concentrating on their last three albums maybe missing out on some classics, but Seize the Day proved again to be their new definition song.

7. MSG - Patronaat Haarlem May
With the bass/drums borrowed from the Scorpions plus vocalist Dougie White a great line up and very good setlist. Surprises coming more from the Scorpions past, but Michael Schenker in good shape showed why he got me picking up my first guitar some 32 years ago ( and still I can't nail down Into the Arena)

6. Steven Wilson - Boerderij Zoetermeer July
Musically possibly the best band this year on artistic level. Playing the brilliant album The Raven That Refused to Sing in full next to other solo work from the man himself including a revisiting of Radioactive Toys. Highlight for guitar Wizzard Guthrie Gowan with his amazing solo on Drive Home.

5. Primitive Instinct - The Peel Kingston Upon Thames August
Sexy Prog festival and my favorite Simon Godfrey could not make it. The day was more than saved by Primitive Instinct who gave an overview of their long career during which they mainly did bugger all. Similar to Credo, Also Eden or GLD in the past, how many British bands walk around that totally convince seeing them for the first time live, yet are appreciated and known by far too few.

4. Angel Witch - Baroeg Rotterdam February
Some songs you played hundreds of times, but never saw performed live and this band produced one of the best. Their song Angel Witch shouted along by a packed Baroeg is one of the best memories from this year. The rest of the show was as good. I did read that later in the year Holocaust played Heavy Metal Maniacs in Amersfoort which resulted in a full stage of fans. Missed that one, but should have been equally brilliant.

3. Queensryche - Effenaar Eindhoven November
Best show in 25 years by Queensryche, with new vocalist Todd La Torre being able to sing their best material. Focus on The Warning I only saw smiling faces at the end of the show. Next time including London, Anybody Listening, Prophecy or many others and we are just pleased Queensryche returned this good.

2. Fish - Paradiso Amsterdam September.
Talking about comebacks. The Fish is back. With his best album in years, advanced by his best show in years. Fish is THE performer in Progland. Highlights of course the Marillo Classics, but High Wood suite is impressive. Next time (if?) he organizes a weekend I shall go Fishing as well.

1. Hell - R-Mine Festival Belgium June.
Warmed up by great shows Cloven Hoof and great moments of my personal back catalogue Holocaust, Savage the Headliner was Hell. Never did I see such a great show from a band this size.  Helped by their NWOBHM with a progressive to trashy edge this show was the one that took me most by surprise and felt like more. Still  did not get their new album which shall be one of the first to buy in January, going for the extra DVD, since this show should be seen.

Posted by erikprogtricolor at 21:38 No comments: 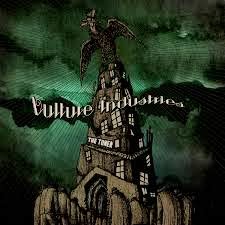 After reading Andrew's review on Ave Noctum of this CD I knew we might have a winner here. Comparing them with Arcturus I decided to find more information on them and soon a copy was ordered. Shortly hereafter Progpower announced the first bands for 2014 and there they were. When also Headway announced them  for next event I realized that supposing work trips are not frustrating my plans again, I might see them twice next year and I already am looking forward to these shows.

Apart from Arcturus I also read comparisons with Extol, Leprous and Faith no More. I agree with all names and you can paint the picture nicely using these names. Vulture Industries shall appeal to the slightly more adventurous prog metal fans. We go all over the place and eccentric vocals mix with widely varied speeds and Headphone requiring background noises. My favorites are the haunting The Hound, the "ballad" The Dead won't Mind and A Knife Between Us which contains one of the better line of 2013 "I'd love to love you, but there's a knife between us."

It is hard to describe the music really (at least to me it is), but I can imagine that live this band shall completely blow me away with a theatrical performance fitting nicely to the music.
Vulture Industries: Something to end the year on a high and to look forward to in 2014.


Posted by erikprogtricolor at 20:38 No comments: