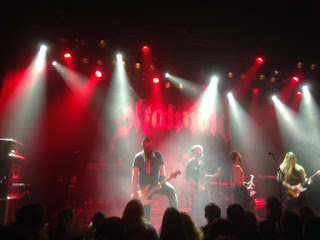 Three bands from the north playing Viking or Pagan Metal. Not a word in English tonight and I was curious how this would be live. Opener were Kjalmold from Iceland. First observation was that they received reactions from almost all in an already nicely filled Boerderij. This in a week, where everyone had plenty of options already was a good sign. The music Kjalmold played is basically feel-good party metal. There are some harsh vocals, but also mics for all six band members to do some harmony work. The galloping was inbetween Folk and Maiden and very accesible at first listen. Their strenght to me lays in the presentation. They enjoy themselves on stage and the big bass player shouted wildly in the air. Inbetween two songs he just raised his beer and roared loudly, which was answered by the audience raising glasses and roaring back. Even when they took their instruments of the stage he kept on walking around roaring. Very nice band live, on CD maybe not my thing. 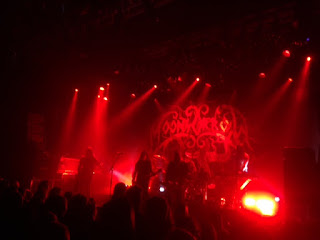 Moonsorrow followed and they were the band that got me going to de Boerderij. I have one of their Finnish titled CD's where they play only two songs, but take more then 50 minutes. I like their building up of atmospheres and heavy undertones. They came up with painted faces and  made the evening turn more metal. Pagan Metal it is called and heavy it was. Musically by far the best band of the evening to me, they focussed more on the songs and less on the party. Still the audience much appreciated them and their long set flew by. Problem with their Finnish song titles, is that you don't recall any names as it all sounds Greek to me. At one point the vocalist asked if we wanted some Heavy Metal. What followed was the best song of the evening, but I have no clue what it was called. A very good show by an interesting band. 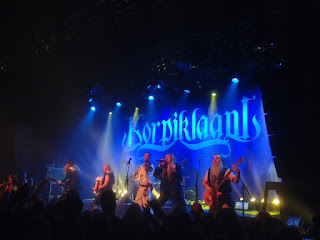 Korpiklaani were the second headliner and they managed to remain unknown to me. I know they played many festivals as well, but I usually go smaller gigs and miss those. So I waited with an open mind. When they came on the first surprise were the accordeon and violin. The folky part turned out to play a fairly big role with them. Actually it did not take long to realize they were here to make a party. This with basically pretty simple songs, where the humpa is omnipresent. Looking at them like this it was a good show. Musically I thought Kjalmold in a similar style much better. As Dennis put correctly Andre Hazes was never far away and even polonaises passed through de Boerderij. Was everybody enjoying themselves? yes definitely so. Was this music that made me run to the merch stand, no not really. After an hour and a bit I called it quits and took the randstadrail back to Den Haag. Very nice evening of party metal, which went down well with several beers.
Posted by erikprogtricolor at 10:06