Psychotic Waltz was probably the best touring band in the nineties who kept on coming back to Holland and never stopped amazing us with their great shows. As this year we comemorate 25 years of a Social Grace and 24 years of their Dutch debut at Dynamo Open Air I went through my collection and played all their 4 albums again this week. It struck to me how good all these CD's still are and what a pity it is their new album still is not there. Regarding "A Social Grace" their debut I can be short. Anyone into progmetal simply can not afford not to have this genre defining album. The next three albums also are in my view must-haves with their until today last album Bleeding out of 1996 showing shorter songs, but including my possibly favorite Psychotic Waltz song "Morbid". Psychotic Waltz always stood for heavy double guitars, technical metal, great vocals, intelligent lyrics and emotion.

How good their CD's might have been Psychotic Waltz really was a band to see live. I Remember (pun intended) their first appearance in Holland. Dynamo Open Air 1991 being the opening band. The guy walking on stage with his backstage pass over a T-shirt turned out to be Buddy Lackey when he suddenly grapped the microphone and joined the band. The far to short set was received glorious and the band asking/begging to play one more song at the end which was brutally denied by the organization.  Luckily only few months later they came back and we saw them in Scum in Katwijk (a place they would return to many times) Given their time they just kept on playing and even with only one album they managed to go on for almost two hours. Covers would in the early days come from Black Sabbath in Disturbing the Priest or Ozzy's Diary of a Madman. From then one I believe they toured Europe twice or more after each album release, so loosing count I saw them many times between 1991-1997. Even my interrail holidays made me make a detour to a rockbar in a village near Heidelberg and some years later Vienna to see them abroad as well. They definitely were the live band of the nineties to me.

And the they were on the road again some 4 years ago. Touring with Sympony X and Nevermore I saw them in Amsterdam and their again too short set did show us that they still have it. A year later they played German festivals and Greek shows which I missed and then it got quiet. Following their webpages sometimes news on recording a new album comes up, but I do not know where and what they are at at the moment. So as I 'm laying Down I 'm wondering, Where are all the people now. Just come back for One Night of Calm through The Netherlands.
Posted by erikprogtricolor at 15:41 No comments: 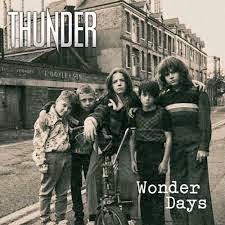 Thunder are back! This just puts a smile on any melodic rock fan's face, as Thunder always guarantee quality. Their Bluesy hardrock with the remarkable voice of Daniel Bowes stands for having a good time. Thunder don't have pretentions and just make music to enjoy themselves and their audience. This new album after their surprising come-back is basically the same we came to know from them, which is a good thing.

Wonder Days kicks off with the title track, where they look back with a smile to their youth with a nice melody doing so. Nostalgia hangs a bit around this album. The cover shows them in their youth in early seventies clothing, Vinyl days are celebrated in When the Music Played and overall this CD brings us 25 years back in time when Thunder came upon the scene and made quite an impact. My first live Thundering came at Donnington 92, when I saw them playing a thunderous set during their Laughing On Judgement Day tour. Thunder also is known for their quality ballads and in The Rain and Broken we get two for adding to the long list of the same. My favorite of the album comes in The Prophet, questioning religious TV programs packed in a nice galloping riff.

So Thunder are back at their usual high level on CD. Good news I just saw is that I will be able to see if live to also remain top of the pops as they do a double in Holland when they play Bospop in July and entertain de Boerderij the evening before. At least the last one I shall attend. Welcome back boys!
Posted by erikprogtricolor at 12:40 No comments: 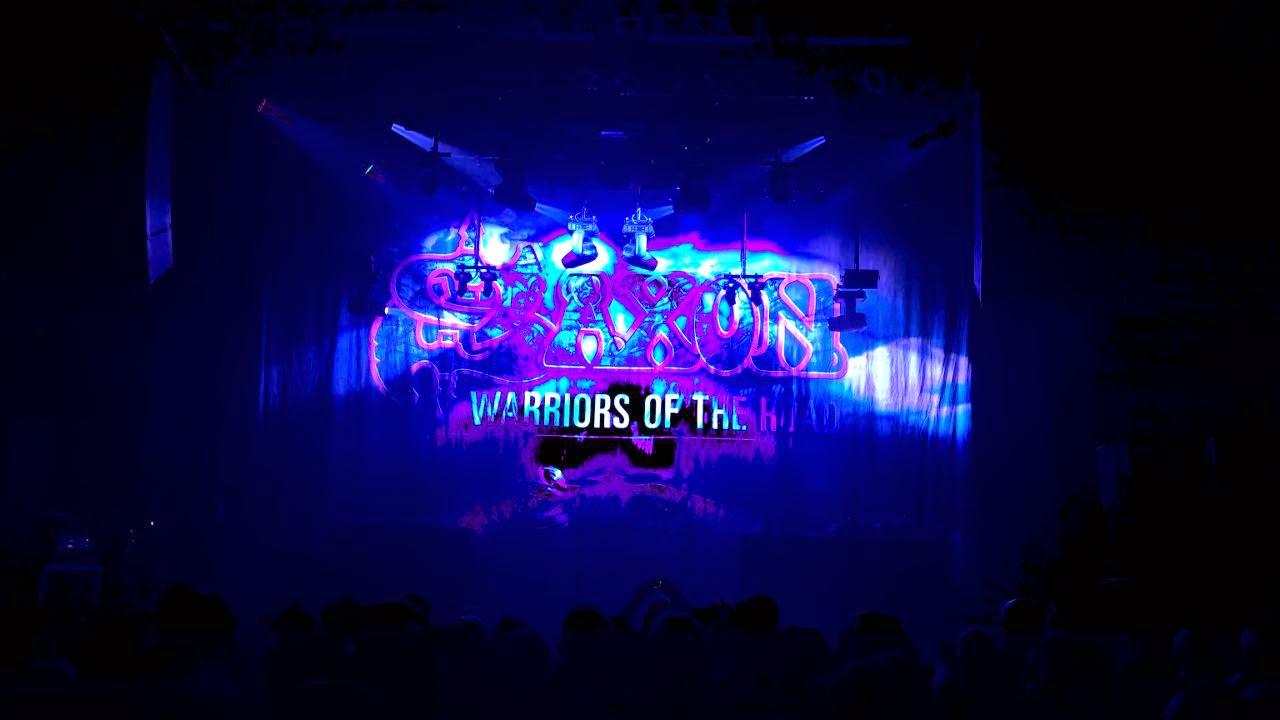 Gebr. de Nobel is to me a new Live place in nearby Leiden, where they had the brilliant idea of presenting us Saxon over Easter. Looking at the forthcoming months programming The Answer, Hell Vicious Rumours and Y&T, chances are I shall be back some times. Hidden in a small alley the building after entering seems surpisingly high. Actually the big hall is that high that it becomes higher than large or wide. Confusing? think two rows of balconies on top of each other under an even higher ceiling. After approving the place, going through support act Blackbone and having some warm-up drinks we were ready for Saxon. 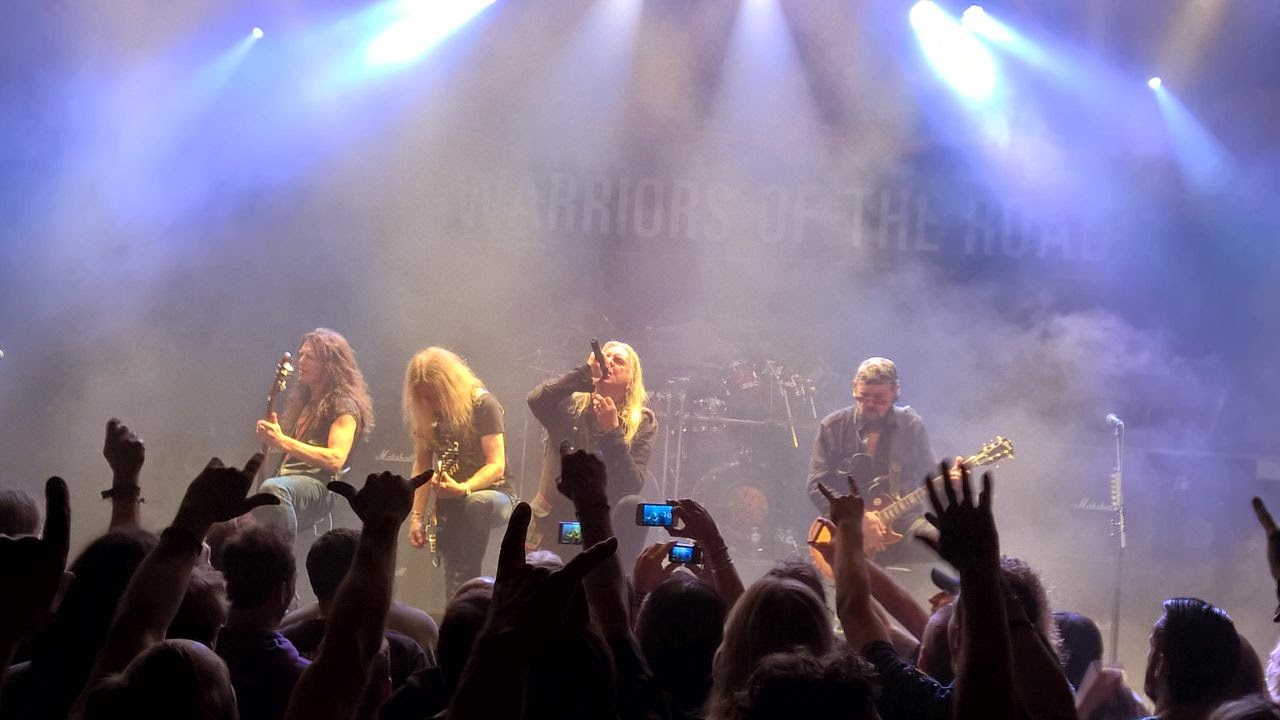 Saxon: Warriors of the Road a tour commemorating 36 years of Saxon was a treat to any fan of good old Heavy Metal. At the same time making you realize how old we get as Saxon was one of the first NWOBHM bands I seriously got into in 1980. Having returned to Holland quite frequently over the years the setlist contains a number of obvious classics. However the change old, newer and some some surprising oldies, made this apart from a good show also one that changed between shouting along to oh yes that one. Biggest surprises from the past were Frozen Rainbow from their debut and Suzie Hold On from Wheels of Steel. Apart from these surprises some of my all time Saxon favorites like Princess of the Night, 747, Strong Arm of the Law and Crusader came by and rocked Leiden. 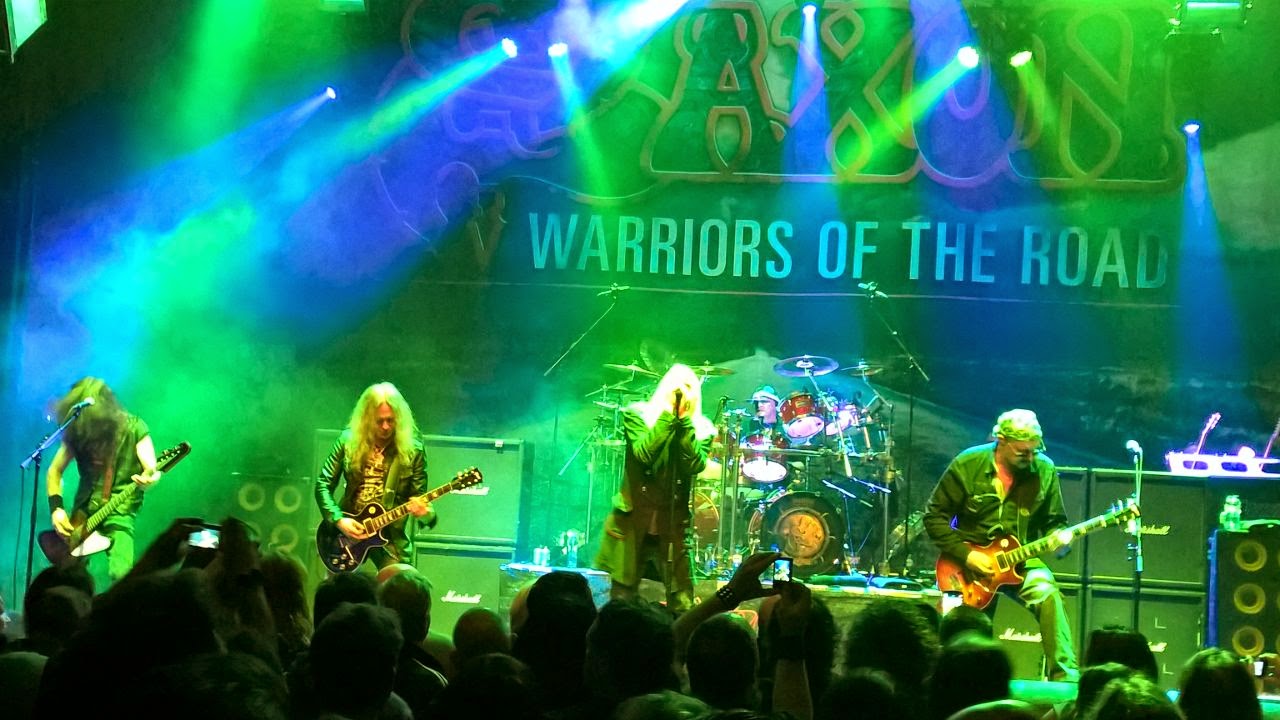 Actually the band seemed to enjoy themselves, the crowd was happy and the sound was very clear and good, with Biff on great vocal performance. Downer on the evening came when one drunken bastard decided to throw a glass towards the stage during extra Wheels of Steel, hitting Biff. This pissed of Saxon enough to let go of Denim & Leather all together (which was on the many setlists passing after the show). Beats me why anyone would do such a thing, but understand Saxon being too old to take shit like that. So missing out on shouting along one of NWOBHM classic lines "Where were you in '79 when the dam began to burst?" we still had a great evening of almost two hours Classic Heavy Metal. Nothing to complain on all performances and welcoming Nigel Glocker back on drums, this turned out to be a very good way to spend Easter.
Posted by erikprogtricolor at 17:07 No comments: 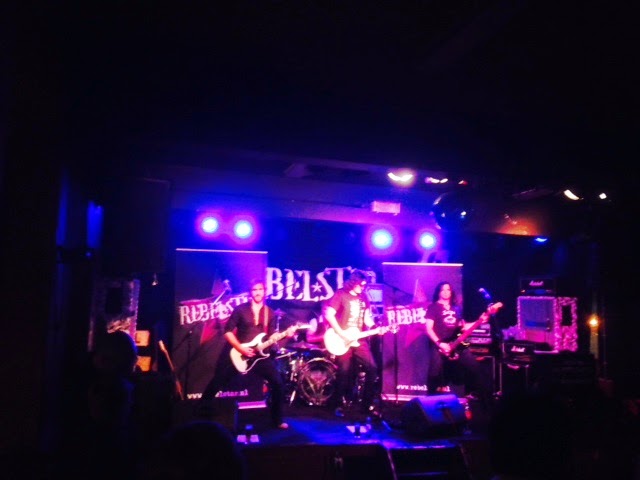 As Musicon is probably the closest place to home where I can see live shows,I managed to miss Air Raid only seeing their last one and a half song, which sounded promising and metal. Rebelstar are locals so bringing some friends and relatives to the not overly packed Musicon. While the other two bands play music aligned to eighties heavy metal, Rebelstar comes closer to eighties hair metal bands. Sounding pretty good doing so a welcome band to see on forthcoming summer festivals in the area. 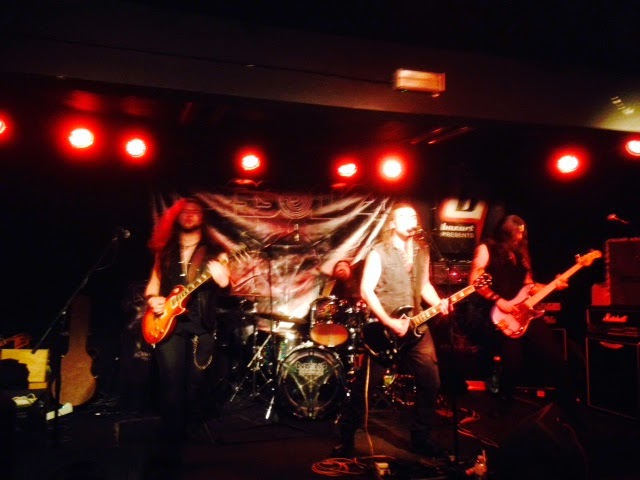 I came to see Absolva though. Last year they came with Savage Messiah to Tilburg and I intended to see them, but railway works and long delays made me stay home. Now playing around the corner a show I could and should not miss. And was I pleased to be there as Absolva turned out to be an extremely good live band. With the right attitude they managed to get the audience involved and just played on in a no-nonsense style that was much appreciated. On guitars they have Luke Appleton of Iced Earth fame, but the two covers came from other bands in "Fear of the Dark" and "Heaven and Hell". It is nice to have songs that everyone knows inbetween, but their own work stood strong enough by itself. We are Absolva and we play Heavy Metal, was the clear opning line and so they did. When seeing bands this good in such a small ambience makes you realize what the meaning of live shows is all about. You stand in front of the stage, seeing a great band working their asses off, have a beer, shout and jump along (without loosing my voice this time), get the CD bundle after the show and thank the band personally for their great entertainment. Thanks to The Hague Metal Alliance for bringing these shows to Den Haag, that many may follow. And as Absolva promised to be back touring in October November I recommend the home stayers to get of their lazy chairs and Rock and Roll. Cheers! 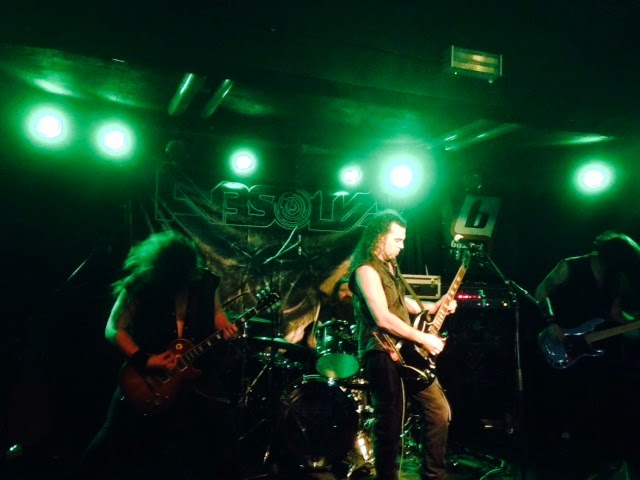 Posted by erikprogtricolor at 13:14 No comments: