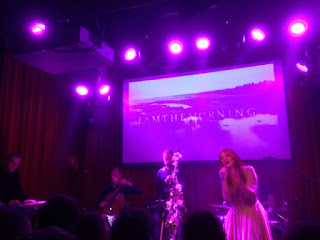 Iamthemorning are a duo from Russia, Mariana on vocals and Gleb on grand piano and keyboards. . Not dissimilar to Aisles recently  a band coming from far receiveing positive critics but not really a known name outside underground connaisseurs. Touring Europe meaning Holland (plus London) and ending up on the small stage at the bar in Patronaat. This turned out to be a very good choice as the around 50 visitors were straight in front of the stage and the atmosphere of intimacy was suiting the set.I did go and see them for several reasons. Some friends who put me on track of new bands before spoke well of them. The few comments I ran into on their IOpages festival performance seemed all positive. And finally their claim to fame is winning the PROG magazine award for best album. Prog magazine is a funny poll anyway. They follow football/school years, so you get halfway the year a best of award. The nominees are usually extremely biased towards British bands and KScope label. This year Limelight (new band) nominations included Teramaze, who formed in 1993 and released their first full album 21 years ago. Still winning as a Russian band means that many people appreciate their music even if being on KScope surely made it possible to make it on the shortlist. 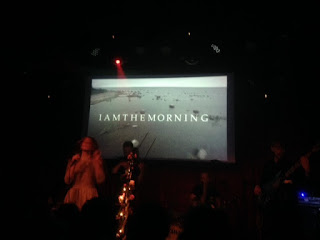 After playing a chamber gig and a duo gig earlier this week, this evening was the full band gig. I looked at the four members and could not figure them out really. They did not look not Russian, nor Dutch. In order to enter the band one must have a bit hair still, brown coloured and a matching beard, while wearing a black shirt. At the end of the gig Mariana introduced them and we had many nationalities with members of two other bands helping out (whose names I forgot). The band held as instruments Cello, Violin, Drums and Bass. So this was to be a guitar-less show. With this band being substitutes, first compliments can go out to them playing all songs as intended and showing an ease at following up small signs from Gleb. Iamthemorning itself turned out to be two very talented musicians. Mariana stole the show with her clear voice, funny introductions and strong stage presence. Iamthemorning do not play heavy music as stated, but there is a constant dark atmosphere around either in the lyrics or in the music. Their last album Lighthouse is about mental illness and tells all the lost souls out there that they are not alone. During the show I could feel this atmosphere indeed and the sarcastical grin from Mariana when she sung Matches said it all "Your house is on fire, 'cause you were annoying and I dropped the match in". The silent and seemingly much more introvert star of the evening was Gleb. Highlight was his piano solo, which started alone at classical master level and had the band falling in halfway to great effect. Some of the songs were performed as duo as well. After the show I bought their last and my first album, so I cannot refer to many songs they played. In total we got some 80 minutes of music, which I considered perfect for this style,

Iamthemorning turned out to be a great live experience. Musically they could not be farther away from the Whipstriker/Apocalyptic Raids metal I saw two days before, but quality is quality. The talent of both was obvious from the beginning and the band were just fine. While being very calm music, there is this darkness in their topics that made me love this show. Definitely a band that should appeal to all music lovers and maybe the award might result in them breaking big. I will be back when they return for a tour of Holland, whatever the format might be.