Rob Rockstoel was an icon in the The Hague Metal scene. He organized many metal evenings and introduced through this many new bands to me. Recently he passed away and Musicon and THHMA in coordination with his family organized a memorial show, where 11 bands would play half an hour paying tribute to him. During the evening it became clear that many bands were grateful to his initiatives and the possibility to give them a stage. John from 3rd Machine even explained that through him he started to do something similar in Haarlem and now puts metal in Patronaat. So indirectly I might have seen much more gigs through him than his own Rob Rockstoel presents evenings. I did not know him personally, but represent the silent majority who knew who he was and enjoyed the shows he put together. Actually yesterday I think I was part of a silent minority, as most people spoke of personal experiences on stage. 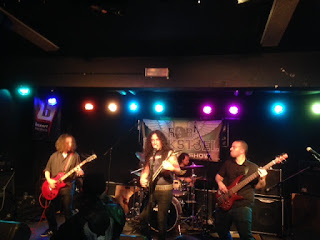 11 bands on stage started with 7 bands playing originals and ending with four metal cover bands. I had another program for the evening, which I moved slightly backwards enabling me to pass some hours in Musicon. When I entered Rages of Sin were on stage. They ended with a Sepultura cover and sounded as good as one week before. Celesterre are from The Hague and turned out to be another good local band. Got their EP and looking forward to a full set in December. Bloodsphere from Rotterdam plays Death/Groove metal and was a good live band. Defazer proved again to me that they are probably the best live band from The Hague at the moment. Their thrash metal did rule over Musicon and got the most enthusiastc reactions from the bands I saw. 3rd Machine from Haarlem were the last band I saw and their metal has some Progmetal mixed in, with mainly aggressive vocals. Good band to close my evening in Musicon. 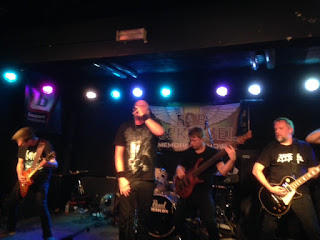 This was a beautiful initiative and I believe that family and friends of Rob must have enjoyed the positive atmosphere in a full Musicon. A true tribute in style to the man that did much good for Heavy Metal in The Hague.
Posted by erikprogtricolor at 12:46