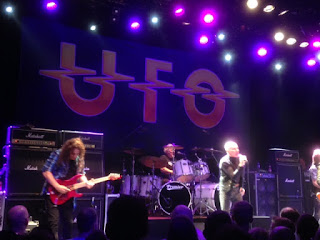 UFO in de Boerderij means go and see them again. Strangers in the Night is my all time favorite live album and always is the core of a UFO show. That album is from 1979 and with the necessary hickups on the road UFO have been going strong ever since. I do not immediately buy all their albums upon release and when their tour is a bit too far I skip as well. At the same time I never saw an average UFO show and these songs are part of my hard rock DNA. Before they came one we had to go through Reds'cool from Russia. This band looked, played and behaved pretty eighties hairmetal alike. Their songs did not make a huge impression, but they were enthusiastic on stage. Their singer had a voice as raw as Quireboys' Spike and maybe because he is Russian can get away with the cheesy Sex, Fucks and Rock & Roll T-shirt. With these five Russians obviously willing to be Americans from 30 years ago, maybe all this fear for a returning Cold War is exaggerated. 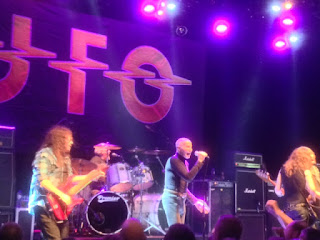 UFO came on and de Boerderij looked very close to sold out. Surprisingly they started with We Belong To the Night from Mechanix.  Phill Mogg looks like someone of the respectable age he has, but his voice is still convincing. His presentation was also great, with his very British undercooled sense of humor taking the piss on his age and eyesight. Of Course the 70's were revisited most and Ain't No Baby was a first surpise on that front. During the show a few recent songs were blended in as well and the build up always guaranteed an old Classic immediately after a new song. So we got again Lights Out, Love to Love, Only You Can Rock Me, Cherry and Too Hot to Handle. From these songs we do not only know the lyrics still,but also every note from the guitar solo's. Thus I arrive at Vinnie Moore. He just is an amazing guitarist, which we knew from his 80's solo work onwards through to any UFO show during the past many years. He ran easily through all the classic solo's and of course this culminated in the never ending solo during Rock Bottom. To many (me included) that solo alone justifies the ticket for the whole evening. It is sad or funny to realize that as a teenager I picked up my first guitar inspired by a certain Mr. Schenker. I always stayed as far away from the Rock Bottom solo as any American tomorrow is from voting for a decent candidate for presidency. UFO nailed them all old and new songs. They came back for an encore which gave us Doctor Doctor and Shoot Shoot (seems to be a pattern here). Once again UFO gave us a beautiful show of over 100 minutes classic hard rock. The band might be getting older, but shows like these are always welcome. 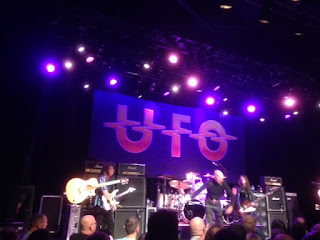