The Great War ended last year 100 years ago. Reason for several bands to look back in time and write an album dedicated to the victims. In Holland we are not that well educated about the Great War as Holland stayed neutral at the time and our history lessons focus on WWII. A few years ago when on our way to Amiens with the family we stopped at the Somme 1916 museum in Albert. For the first time I got a feel for what happened there 100 years before and most striking was the signs along the road showing minimum progress made over months of time. These two albums are in different musical styles, but the darkness of this pointless war (aren't they all, but this one even more it seemed) is described intensely by both. 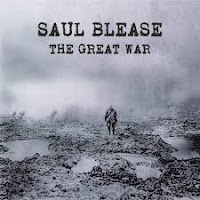 Saul Blease - The Great War
I never heard of Saul Blease before but I ran into reviews on this album on several Prog rock sites and magazines. He is only 23 and from Bristol, so hope he's a Gashead. Now war themes might to metalheads be more linked to extreme metal bands in Prog rock he definitely is not the first either. Fish released on his last album an half hour epic on WWI, while bands like Credo and Pallas wrote about it before. The band Freedom to Glide even dedicated their first two albums fully to the Great War. It always struck me how many British artist dedicate these songs to a relative that died in the war Saul Blease does so remembering his great uncle Chas Blease who died at the age of 21. Now I met this CD through Prog zines, there is more than a bit of industrial mixed in the sound. Actually what this one man project brings us is nothing short from very impressive. Many styles blend and the album caught me completely with several highlights following each other. Angel of Mons is possibly the best of them all. If I would have received this album last year it would have made my top 18 of the year, as this is special stuff. Not sure how often Saul is touring or playing live, but I would love to see this album performed in full once. Is there a point of critic, yes a minor one. When you write such good lyrics on such a serious theme, why not add them to the CD. Non native speakers like me, now need to open a bandcamp page to read along and in this case that adds a lot. 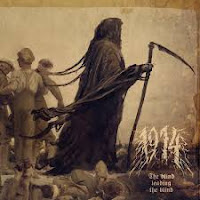 1914 - The Blind Leading the Blind
An extreme metal band writing about war is nothing new really. References and examples a plenty, yet this band has something to add I felt. First they are from Ukraine, which is a country at war and not hugely represented in my CD collection. This album has hints of Death-, Black- and Doom metal. Kicking of with an old sounding song on recruiting they have some intermezzo's as well. The heavy parts are grooving and the voice is extreme but easy to understand when reading along with the lyrics. Halfway the album there is a surprising cover of The Exploited in Beat the Bastards, which also in this version holds a punk vibe. Hanging on the Barbed Wire is a song that could have been sung during the war by the soldiers as it reflects the safety on a distance of the higher ranks, while so many soldiers die at the trenches and in no mans land. The highlight of this album can be found at the end, when The Hundred Days Offensive comes by. This song has an acoustic opening, a catchy chorus and some heavy blasts in between. That song alone makes it worth checking out this album. 1914 puts Ukraine (more?) on the metal map with this strong release.
Posted by erikprogtricolor at 15:55 No comments: