Today it is Parkpop day in The Hague. This free festival has known some huge names and even bigger crowds. In 1992 the peak was reached with more than 500,000 passing the Zuiderpark. Nowadays it has shrunk again and I don't really follow numbers any longer, but still over 150,000  people visit The Hague even on the rainy days. Today I won't go there, as an act of protest. Reason is the organization is brutally ignoring any international metal, hard rock or prog rock bands in the line-up. Ok originally local hard rock band Rosie were scheduled, who might have made me get the bicycle out and see them. After they had to cancel and were replaced by a guitar band there is nothing left worth going really. In order to show how good it was in the past I shall dig in my memory to review 1983's opening band of the day. 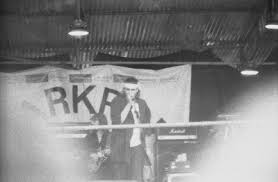 Marillion on their first tour outside the UK passed Germany, Roskilde and Parkpop! Being still unknown to the masses they were the opening band on the main stage. Due to many reviews in Kerrang those days I had discovered them before and bought both the debut album Script. as well as their EP Market Square Heroes. Those were the days when Marillion opened a new market for me in Progressive Rock coming in through the Hard Rock / NWOBHM door. Only hereafter I would learn about Classic works of Pink Floyd, Genesis, King Crimson, VDGG and all them dinosaurs. Marillion at Parkpop meant that I was standing in front of the stage with Magchiel in antecipation of things to come. As they played on the Main stage in the park, the stage was wide. With only a few people actually coming to see them there was plenty of space in front to have this show in full power coming over you. What do I remember really? well that Fish's stage presence was already very impressive and Forgotten Sons turned out to become a highlight. Also some memories of a fast growing crowd jumping up and down to Market Square Heroes vaguely comes back. Speaking about growing crowds I was with Magchiel waiting up front for things to get started, while Hans and Marcel went to see a dutch (hard) rock band at the second stage who played earlier. Coming back to Marillion they also admitted this was a pretty good live band. Thanks to the internet I coud find the setlist of that day.
1/ He Knows You Know 2/Garden Party 3/ Script For a Jester's Tear 4/ Caharting the Single 5/ Assassing 6/ Forgotten Sons 7/ Market Square Heroes.

So I did not see Grendel after all, as I don't recall any later shows where Grendel still would be played. A Year later they already were one step higher on the line-up at Hollands most famous festival at the time Pinkop, supporting their Fugazi album. The group of friends who considered Marillion among their favorites grew fast and we would have many returns of them. When Fish left friends got divided, but we still manage to fill up a 12 person house at Marillion Weekends. The quality remains, but as they say the first time is there to never forget and Parkpop 1983 was a special one. After Marillion made many new fans that day, they left the stage victorious. This only to make place for another British band makning their outside UK debut: Diamond Head. The band that brought me the Borrowed Time patch I would have as a stand alone on my jeans jacket for years to come.
So Parkpop gave me great memories and just looking again at today's line-up makes me sad.
Posted by erikprogtricolor at 11:26 1 comment:

It's the March of the Saint! Finally all reviews I have seen mention the brilliance of this band and their complete lack  of recognition at a worldwide scale. I do remember that upon release of their debut album it was not all glory in the press with a new band getting such an expensive VideoClip for Can U Deliver and album artwork costing tons as well. Their second album Delirious Nomad convinced all that they were a name to reckon with. After playing WHD many times now, I can only conclude everyone is right. This album can stand proud among their best releases. The magic of Armored Saint for me always consisted of two items. First on vocals they have in John Bush one of the best voices in Heavy Metal and  second they swing and groove and make a very heavy form of (slam) dance music. It is impossible to sit still and listen to their songs, since the rhythm always makes at least your neck move back and forth. Win Hands Down has all the usual ingredients of a Classic Saint album. Starting with some heavy uptempo work, a semi ballad, some dancing songs and a true ballad (which for some reason appears in two versions on the album only minor complaint from my side). As I keep on repeating their groove Joey Vera should be mentioned. Known from Fates Warning, OSI, A Chinese Firedrill he is longtime bass player at Armored Saint, now main songwriter and producer as well. What a great job he did as the songs and sound are all at peak. Without passing all songs I woud recommend as starting points the title song (clip on YouTube) or my favorite An Exercise in Debauchery.

If anyone reading this decides to check out or purchase the album (which you should if you think you like Heavy Metal) please get the special edition. For a few Euro's extra you get a DVD with a full show of 2009's Keep it True Festival, some clips and the making of. This is real value for money as especially the KIT show is a must, as it basically is a best from the past for them. Watching it I remembered my all time favorite dance song in Last Train Home. This August Armored Saint shall tour Europe with Queensryche. A show to look forward to already as I haven't seen them playing live for 24 years now. In case they include the Last Train Home in their set, I am afraid Queensryche has to do without my vocal support, as I probably loose my voice on that train. Get this album, you won't regret it!
Posted by erikprogtricolor at 18:22 No comments:

Whitesnake - Sail Away / The Purple Album

I am fully in Whitesnake mood this week as during a work trip I brought and read their biography Sail Away by Martin Popoff. Also last week I received the Purple years their new album which is looking at the past. 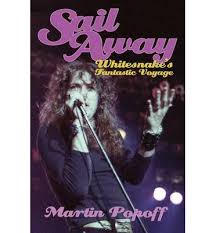 Starting with the book I learned and remembered a lot reading this on many interviews based book. Together with Hans and Magchiel we discovered Whitesnake during the early years and between us I think we had all albums from Snakebite to Slide it In. We played many games of cards listening to Whitesnake and reading now their history following their albums I realized how good they were. Actually a few years ago I found their compilation The Early Years discounted and I think I can say it is my favorite Whitesnake album since it covers exactly the period mentioned above. This book taught me that the band considers Ready An' Willing and Come An' Get It as Highlights of that period while Saints&Sinners was considered a step down as the band was falling apart at the time. Good to read though that David Coverdale mentions that when stating this before people came to him telling him S&S was their favorite. Reading back through their biography I would probably mention also S&S as my all time Whitesnake favorite. Maybe biased by the fact that I saw them first time live on this tour when they played Vredenburg Utrecht January 1983. But Here I Go Again as well as Crying in the Rain would definitely make my Top 5 (or even 3?) of best Whitesnake songs ever. Returning on their 1987 album I can say that the rough versions from 1982 were my favorite ones.

Then came the album 1987 (or just Whitesnake in the USA) which sold them about 14 Million copies and made them huge all over the world. Very interesting to read how singles were the main way to break them big and the Videoclips on MTV did their job as well. The lack of singles made them step down to "only" 2 million sold copies of follow up Slip of the Tongue. Again I am rowing against the stream, as when not considering the upgraded versions of old songs for me it is Still of the Night (1987) versus Judgement Day and Sailing Ships (SOTT) and the latter album wins. Also the role personal did or did not play on the albums brought some insights in the way the music world works. Never realized I was listening at times to the great Dann Huff (Giant anyone?) and never really to Adje Vandenberg or Vivian Campbell.

Whitesnake through the years never did a bad album really and I saw them on the Restless Heart Farewell Tour which ended in South America end 1997 when I was living my Brazilian Years. In 2006 they were on Arrow Classic Rock Festival in Holland and being the only one of my friends going more up front I loved the show, while others considered voice, sound and wind turning this into a weaker show. Now after releasing new albums Good To Be Bad and Forevermore, Whitesnake is back by going back in time. The Purple Years is a collection of songs from the three Deep Purple Albums David Coverdale sung on. Admitted I also do not know these albums in full so part of it is new to me. Next to Classics like Burn, Mistreated or Stormbringer I did get a valuable history lesson here.

In December Whitesnake Tour Europe and they are back in the renewed Vredenburg in Utrecht as well. For nostalgia's sake I need to be there, hoping work allows me to be around at the time. Even if they might concentrate on Purple Songs and their Hair Metal Years I hope any title song from their golden years (1978-1982) shall make the setlist as well. Whitesnake might go under my radar every now and then, but what a huge list of great songs they have given us. Guess I am going to get my ticket for 2 December already.

Posted by erikprogtricolor at 17:39 No comments: