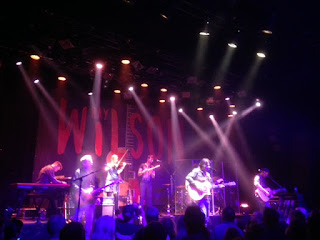 Ray Wilson playing in de boerderij a set advertised as Genesis Classic. I knew that his version of Genesis Classic puts more focus on the Phil Collins pop years. The album he sung with Genesis (Calling all Stations) is unknow to me and I also do not know anything from Stiltskin his other hit band. So why did I go? to see him perform his solo work. Although having only one of  his solo albums it meant enough for going see him play live. Ray has a good voice and I expected that he would be able to bring a good band along. One of the probems for Ray Wilson is, that in my CD collection he is crammed inbetween Damian Wilson (one of the best voices in prog) and Steven Wilson (one of the best artists in Prog). So picking up his album with such talented neighbours is rare. There was no support act and we would be treated on a full night with a halftime break. 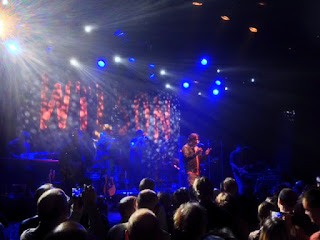 As I did not know many of the songs I also cannot tell whether they were from Ray Wilson, Genesis or Stiltskin. So herewith just some impressions. Genesis covers were present from very good (as Carpet Crawlers and Mama) through neutral to me (Land of Confusion), to songs I never liked and did not change my opinion now (Follow you Follow me and Jesus He knows me). Surprisingly Solsbury Hill was climbed as well and sounded great as expected. Stiltskin's hit Inside sounded good and the songs played from Calling all Stations, might make me pick up that CD, when crossing it cheap one day. Highlight for me were the songs from his solo albums. Introduced by a variety of stories I considered Makes Me Think of Home and Song for a Friend the highlights in the set. There was one disappointmet as well. Closing the evening with Knockin'on Heaven's Door. I did not like the song when we played it with Two Minutes Warning, nor the Guns and Roses cover. Also now it was a boring end of such a nice evening. Then I was considering picking up his last album, but the queue was long after the show and we ended up in the bar until I needed to rush to catch the last train home (Armored Saint anyone?). Ray Wilson showed me that an evening of mostly unknown pop-rock-proggish songs can be very entertaining as well.
Posted by erikprogtricolor at 18:38