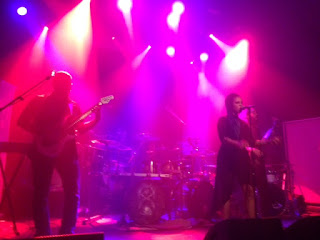 I put the above three bands in order of appearance. There is a reason for that as I discovered Oceans of Slumber after they released their debut album, Ne Obliviscaris when they released their second album and Enslaved only years on in their career when they blended more progressive influences into their Black Metal. Still I was looking very much forward to all three bands and thought I left home in time. With the idea of not drinking on a Tuesday, not cycling through the cold and gaining time getting home I took the car. Big mistake as it turned out that 8 November broke this year's evening traffic jams record. So there I was standing still slowly seeing on the navigation ETA that I would not see the start of the evening. In the end it took me 150 minutes (back home 75) and I missed half of the Oceans of Slumber set. Not a good way to start the evening. I can't comment much apart from that they sounded absolutely brilliant again in my ears. In Suffer the Last Bridge we got a song they did not play in April. Cammie bought shoes, Sean and Dobber still change instruments, three drum kits makes a small stage. And then after ... This Road it was suddenly over, almost ten minutes before the announced time-schedule. With this short set, there was not even a point in shouting for Coffins Like Kites. Last time I did the fan thing of speaking with the band and taking a picture. This time I wanted to see the other two bands as well and only saw Keegan in the break. Hope to see them back on Progpower stage, where again I got convinced they would go down so well. 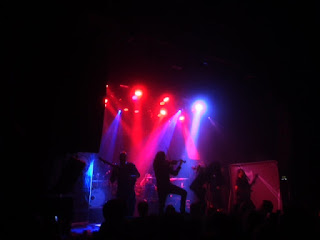 Ne Obliviscaris were the second band and some two years ago they impressed me a lot with their album Citadel. These six men from Australia turned out to be a great live band as well. Striking point was the very different style of the two vocalists. Xenoyr looked and sung extreme metal, while Tim looked very extrovert, played violin and was in constant contact with the audience. Last year it seems they already played Tilburg and reactions were pretty much of the whole crowd. The band only got to play four songs as well, but with each of them being around 15 minutes, they still got decent time to show their skills. And skills they had with a main role for the bass player on his many instrumental interventions. Citadel was represented by the the two epics and they sounded fine. This band follows a new way of touring, where you can pay a monthly fee to support them. I do not know the details, but hope they manage to stay around and record. Very fine band mixing the extreme, the technical and the sensitive. 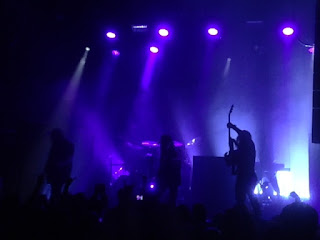 Enslaved tour celebrating 25 years of existence. I hardly can be called a diehard fan, but do appreciate what I know from them. PPE Christian advised me, that we would be in for a very good show. Cutting short: he was right. Enslaved are not a Black Metal band any longer. They asked us if we were ready for some Norwegian Heavy Metal and that is just what they play. They have harsh vocals, but also from behind the keys some very good clean vocals. The metal is loud and during  The Crossing really heavy. Instrumentally you could see the 25 years of experience and the show stood indeed as a spectacle to watch. Grutle turned out a Level 42 fan, the encore started with a drum solo, Enslaved likes Tilburg and we were invited to sing happy birthday to them in Dutch. Great closing of the evening that started somewhat disappointing due to time issues, but got me driving home satisfied while listening to predictions of the outcome of US elections on the radio (man were they wrong).
Posted by erikprogtricolor at 17:53