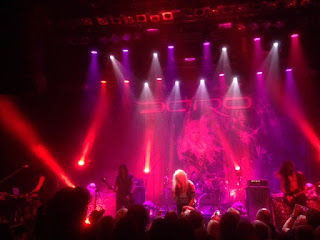 Tiago having a cultural evening at school watching Jana sing, meant for me a cultural evening in Leiden watching Doro sing. Those who did not go might focus on her old fashioned Heavy Metal, her accent after 32 years, German Cheese, or make been-there-did-that-comments. Well those people just don't get it. Going to a Doro show means good old heavy metal with an icon on vocals and a solid band behind her. The formula is simple and entertainment is guaranteed. Yesterday was the first show of the Love's Gone To Hell tour. Two days before the show I learned that there would be a support act as well in Spitfire from Norway. As they did not impress me through songs or presentation I keep it short. Funniest moment was after the show when the shirtless vocalist wanted to see us all outside. First it was fricking cold outside and in Holland (as in many other places) asking someone to come outside is an invitation to fight. A confused laugh went through the hall. 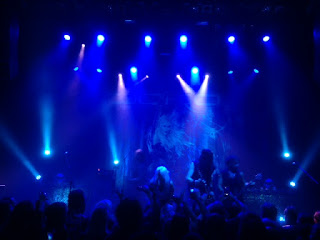 Preparing the stage we could see a gorgeous Doro appearing on a huge banner ( I also look younger and fitter on the cartoon then in real life). The lights went off and the international band came on. Doro followed as last one and started banging and greeting all in the crowd very enthusiastically. During the first song we got already the left side confirming they were alright, as did the right side and the people in the middle. This set the tone, but everything was overruled by the enthusiasm of Doro that continued non-stop. Doro was good by voice and good by mood. I do not own any Warlock or Doro albums, but still recognized many songs. It is not for nothing that she is called the Metal Queen as she did produce several songs everyone knows. Highlights for me were Burning the Witches and Für Immer. Shouting along with All We Are is another milestone in her set securing a party. The show was very good, which was helped by the fact that the band is tight. I guess playing in a band like Doro means accepting you are not alwaysin the spotlights, still all four convinced in their presentation. I thought I recognized the drummer and just read that he played in Waysted and Britney Fox, so maybe I saw those once (failing memory here). Only during the evening I heard that one of the guitarists is Dutch, Bas Maas ex Afer Forever. So I might have seen him at ProgPower 2000. With Bas and the bassist both being tall, Doro somewhat disappeared inbetween them on the front row. This is only physically as her stage presence is huge. The fact that she constantly shows that she loves being on stage made this a sincere evening of True Metal. 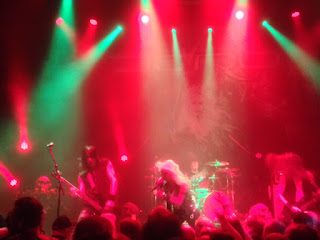