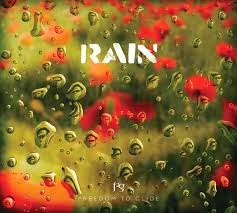 Several bands started as Pink Floyd cover bands and later decided to write and release their own material. First name that comes to mind is RPWL (don't know if Airbag was a coverband as well). The advantage is that usually their own material is PF influenced and the guitarist knows very well how to add emotion to his playing. With Pink Floyd not releasing any new material for almost two decades, this is the best we can get on that side of the musical spectrum. From the UK we get a new star in this area - Freedom to Glide. They released their debut album Rain, which I heard first on Progstreaming.

Rain is a concept album, as we are talking prog no surprises here. World War I is the theme of this CD, with all it's useless waste of lives. 100 years after the start of this war the timing is appropriate, and with Holland being bystanders (thus little attention at history classes) I noticed I should get some more knowledge on the theme. Since my attention is to tip about the music of good albums, let's continue with that. Well I can be short here, Pink Floyd (later stage) is never really far away. The title track is parted in 4 songs, and opener part 1 does not need long before a very Gilmouresque guitar enters and ups the level to a very pleasant listening. The album quietly passes through it's 15 songs, without any aggressive addings (which might have suited the theme)
The music is beautifull, while the vocals are suiting yet not spectacular. Cosmograf is a similar band that several times is remembered (Riders on a Wave).

I love these albums for a weekend spin, preferably Sunday morning when no alarm is set (hence the time of my review) Strongly recmmended to those who miss Pink Floyd and consider their post Waters albums also very good. Best enjoyed in bed with a headphone on humming along to "So my brothers fell like Rain".

2013 to me was a great year for new releases and looking back I quickly found that I liked far too many CD's for a top 10 only. Therefore before counting down to one herewith some albums per genre that need to be mentioned. While making up teh list I also realize that pretty soon I shal get more 2013 releases which might have been top 10 material (Hell, Fughu) but with the risk of forgetting some herewith an overview.

Prog Metal releases:
With a great album by all of the Big Three the tone has been set for the full year. Dream Theater did not make top 10 but a good CD. Haken missed out, since to me not as good as their previous two albums. Kingcrow might have made it if I would have made it to their show In Crescendo is very good indeed (and a surprising number one by Andrew on Ave Noctum) Memento Waltz again did not reach the impact they had live at PPE 2013. Votum I just never heard by headphone although I like the album and expect a high position for a certain former metal mayor. Cynthesis was original not as good as hoped for, but grew on me and only seconds ago dropped out of my top 10. Jon Oliva not at Savatage bests level and Leprous not even near Bilateral.

Prog Rock releases:
Spock's Beard came back very strong with new members on board and containing Ted Leonard in top form and in Something Very Strange one of my favorite songs of the year. The Tangent very strong concept album, Big Big Train only releases great albums, but the surprise is gone a bit for me. In the Neo prog corner Final Conflict released their best album ever, Comedy of Errors confirmed their come-back in style from two years ago and The Room is the new band to look out for in the genre to me.

CD's I heard at Progstreaming and bought thereafter:
What a great website for new findings. Thanks to them I got into Submarine Silence, Traumhaus and recently Freedom to Glide (for all later Floyd lovers)

NWOBHM in 2013 so OWOBHM
Live R-Mine made me see several bands from my past, Deep Machine in Tilburg was great and some bands brought out new albums very worth a try. Legend and Satan both firm, but Persian Risk's Once a King is not to be missed (or was that a 2012 release?) Hell still to receive.

Several Heavy metal:
Vulture Industries promises a lot for their 2014 Dutch shows and Witherscape is just another great band of Dan Swano. Irish Heavy Metal fron Sandstone showed to be a stayer and while talking Irish  Black Star Riders is a worthy Thin Lizzy follow up.

But in order to cut a long introduction short, herewith the 10 that made it to my list.

10. Attacker - Giants of Canaan
They came to Holland and I missed them, but prepared myself with the new and their Classic album (Battlle at Helm's Deep). Traditional Heavy Metal US style, with a closer in Maiden style but then better. Headbanging all along.

9. Lifesigns - Lifesigns
A Prog supertrio releasing 5 songs that stuck in my head from first listenings. Nick Beggs with a background in Kajagoogoo now making it twice in my top 10, how things can change in 30 years.

8. Queensryche - Queensryche
Back in eighties form, what a relieve. If this album would be over 45 minutes and contain some longer or more heavy songs, they would end up even higher.

7. Persefone - Spiritual Migration
This one came as a huge surprise to me, since almost as good as the best Zero Hour work. Vocals are OK, but too screamy at times, otherwise they would have made my top three. Hope to see them again soon.

6. Steven Wilson - The Raven that Refused to Sing
I stopped following everything by Steven Wilson some years ago, but this one is to me easily better than the last albums of all his projects and bands and that includes PTree. If anyone needs proof that albums with a sinister edge are more interesting here it is. Oh yeah Guthrie Govan what a gitarist. The man deserves main stage slots at any major festival, but audiences might not get it.

5. Fates Warning - Darkness in a Different Light
Back after 9 years and heavy as I like it. Wondering by myself why not higher on my list, but the last 4 surprised me more. Problem to FW is you expect the best and almost always nearly get it.

4. Shineback - Rise up Forgotten, Return Destroyed
Simon Godfrey gave us Tinyfish and now came back with this electronic/prog/pop/whatever master piece. With a little help from his friends. I still regret he had to step out of the Sexy Prog festival. Impossible to describe shortly but must be heard by music lovers in general.

3. Reuben Archer - 's Personal Sin
The best hardrock album in the style I loved already over 30 years ago. Wine, women and song in a catchy way. Respect for the voice of Stampede on his first solo album. One of my many good intentions for 2014. I am not going to let pass another Reuben Archer or Stampede show if I have the chance to see them. So much hoping he shall be added to HRH AOR.

2. Fish - A Feast of Consequences
What a comeback of the best performer in Progland. Everything is right about this album starting with the best artwork package of 2013, the lyrics, the emotions. Containing  in High Wood a suite of epical proportions and what is most important his voice is back after a scare. Partially because of melancholy Fish always moves and this time managed to surprise me yet again.

1. Oceans of Slumber - Aetherial
My number one spot should go to a new discovery. Tech Metal, Faith No More, extremities, highly melodic, aggressive, emotional, doom, prog, black I simply loved this album as from first headphone listening (required for full appreciation). Rollercoaster ride with in closer The Great Divide a highlight as they nicked it so nicely from Pallas. This album is not easy to swallow, but if appreciated it becomes one to fall back to every now and then. Live not even very active in the USA, so fat chance for nearby festivals.

Posted by erikprogtricolor at 22:50 No comments: