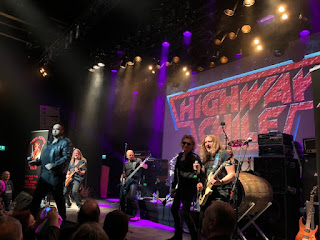 A Tribute to Alfred Lagarde with Picture and Highway Chile. That was the full name of this evening. Alfred Lagarde was hollands hard rock and metal DJ on national radio since the seventies. I knew he passed away, but did not realize that was already 22 years ago. In the seventies he presented Betonuur on the radio. I got into hard rock and metal through Hans, when he moved from favorite pop acts like Queen, Quo, Cheap Trick and Meat Loaf to bands like Rainbow, Thin Lizzy, Rush, Deep Purple, Van Halen and the likes. This last one got famous in Holland when Alfred Lagarde started playing Runnin'with the Devil on national radio. I did listen to Betonuur, but as it was an afternoon show, not as frequent as follow-up Stampij on the Wednesday evenings. If you check the internet you can still find streams of the last eight or so episodes of Stampij. Later on Alfred Lagarde showed up at Countdown Cafe, but I do not recall listening a lot to that show. So where Alfred was fundamental for the start of metal in Holland the bands Picture and Highway Chile were as important for the local scene to develop. Now I must admit that I never really got into Picture. I only started travelling to shows when I just turned 17 and I believe Picture were not playing that often anymore as from begin 83. At least in my memory bands that would tour all the time in the mid eighties were Jewel, Vengeance, Helloise and even Vandenberg. Still Highway Chile I saw a few times, mainly as support in major venues. My first big gig was Whitesnake and Ozzy in Tivoli January 83. Whitesnake were in their Moody/Marsden years with Cozy Powell on drums Jon Lord on Keys and Neil Murray on bass in their favorite line-up for me. Ozzy was rumored to refuse opening for Whitesnake and cancelled, so Highway Chile stepped in. Later that year when I already knew Storybook Heroes, they would also support MSG and they were among Holland's finest. Picture can be considered Holland's first metal band and as was mentioned during the evening James Hetfield was spotted with a jeans jacket with the Picture logo on it. Pity for them Metallica never covered a song by them as that can do wonders to name and income. So for Picture I know their hits. I believe I had a tape of the Stampij show where Schmoulik Avigal was introduced as their new vocalist as well. So this evening woud be a trip down memory lane and it was no surprise that the decent filled Boerderij was full of people in their fifties and sixties. I even ran into Gerrie from Limburg, so being Dutch bands people would travel for this occassion as well. 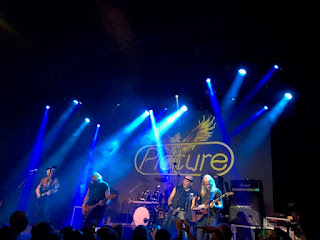 Highway Chile were opening the evening and Stan Verbraak is taking care of vocals nowadays. As he was also in Helloise we did get a Helloise intermezzo with songs I recognized as well. Highway Chile already sounded pretty good, with The Fever as highlight. After some 40 minutes original vocalist Armand van der Stigchel joined and we got treated on their best songs Jesse James and Carol (Lady of the dark room, dark room) He flew over from the USA for this and showed he still has a stage presence and the voice to match. Later we got a hairmetalish song on Highway Chile's metal infused Whiskey, which was touring along in a barrel, but not served (tip). Ending in style Armand came back singing for us that we are Headbangers. I was maybe coming more to see Highway Chile once again and that did not disappoint. During the break Kees Baars another DJ with a heart for metal was supposed to talk about Alfred, but he was sick as a dog and could not make it. Stan Verbraak and Armand took over and we got a short lesson in metal history in the Netherlands and Alfred's major role in that. So hereafter Picture came on. A band in almost original 79 lineup meant we got a lot of white hair on the stage, with most of them managing to keep their big hair. As I said never the biggest Picture fan it was nice to hear Eternal Dark, Heavy Metal Ears, Diamond Dreamer live on stage. Peter Strykes gave a guest performance and showed he has a better voice although more commercial maybe. Their biggest hit is Bombers and this song got introduced by a radio interview with Alfred of some 40 years ago. So this was an evening of old school dutch metal and it seemed to me that those present highly enjoyed it with two bands in still remarkably good form. Rock 'n' Roll proved to be still better than music. 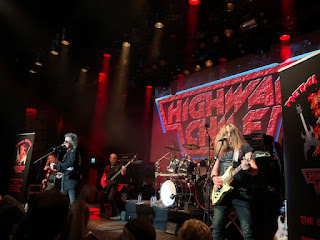 Posted by erikprogtricolor at 11:18 No comments: 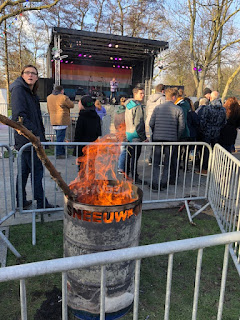 18 January was originally the day that I invited friends for a New Year's drink in Musicon while enjoying some German Power Metal by Mystic Prophecy and Mob Rules. With a last minute cancelation by a band due to family circumstances an alternative was needed. Now Peter was asked to introduce bands this year on stage at Sneeuwpop, so I asked him if there would be anything to my liking playing. The answer was yes, so cycling to Wateringen was the new best plan. Now Sneeuwpop is a brilliant name as it both means snowman, as well as ending on pop being Wateringen's winter edition of the long running Waterpop in the same area in the summer. Paaspop in Holland are always bragging how they open each year the outdoor festival season at Easter. In greater Wateringen (read The Hague) we all know that the real opener is mid January at Sneeuwpop already.
The festival is held at an area which during bigger Waterpop serves as backstage area. Still in the end a few hundred people at least attended. Nearby Ice Skating and snow centre de Uithof supplied a truck full of snow the day before. This  is a smart move as with the scary fast global warming we now raise children who won't know snow whatsoever. While the winter is mild I still was smart enough to wear a thermoshirt as six hours standing outside even in a sunny 7 degrees gets you cold in the end. Also here precautions were made with available Snert or Broodje Bal. When during the day several friends turned up  we had a succesful opener of the festival season indeed. 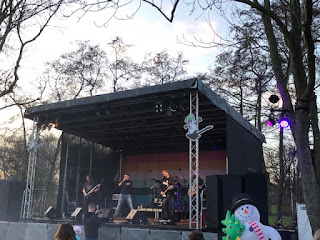 So what about the music? Peter advised me to be in latest 14:50 as I might like second band The Worst Example. I did as suggested and missed Square therefore. The Worst Example are from The Hague and play a kind of pop punk that reminded me of the Offspring or Greenday. I am no specialist in the genre, but they also mentioned a link to a Blink 182 song and it sounded all pretty good. Nice opener for the day to me. Actually most bands were acceptable to me, but the one that stood out were Monster Machine. This band plays hard rock and original songs. Between many covers today it was good to hear a band playing own songs being best. Good vocals and strong band. They seem to be recording a debut album, so I guess to see more of them soon. Slowly the temperatures were getting lower, outside it got darker and the three open fire pots were very welcome indeed. Hanging on till the end I had a good afternoon and Peter did a fine job announcing bands while giving us constant updates on the actual liters of snert sold so far. Cheers to Sneeuwpop and we return in 2021. 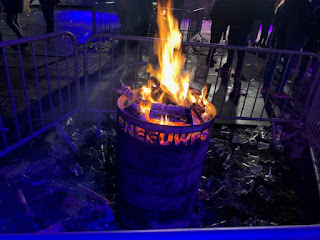 Posted by erikprogtricolor at 10:12 No comments: 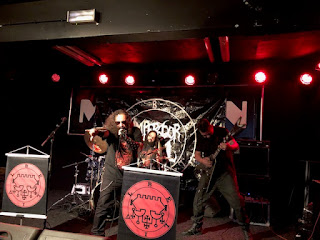 Back in Holland what better way to start the new year than going to a show in Musicon. This evening was not going to be easy as from the start things went slightly pear-shaped. Imperador Belial played here before and two years ago they stayed at my place. So I was looking forward to seeing them again.  In 2017 they toured together with their countrymen of Luxuria de Lillith, which meant we got two short sets of old school black metal. This time the support was to be local, but original planned support cancelled. Strangely noone wanted to step in. Result we were depending on Imperador Belial alone for the evening. Due to family circumstance the bass player could not join this tour and two potential substitutes both living in Germany also had work obligations. So a bassless show it was, with some effects to cover up the loss. 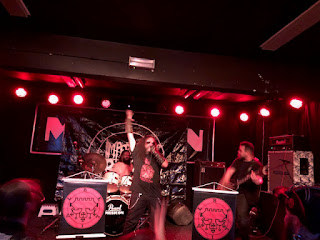 At 22:00 a short intro announced the start of the emperor. They played ten songs from their discography. Now they do not write very long prog epics really, so after some 35 minutes we learned the set was over. Circumstances on both band and support therefore made this not really a full evening of live music. What we did get was sounding good though, where to me the lack of bass player was overcome rather well. The not so big crowd present this evening seemed to like their performance as well and in the end we did get a kick ass old school show.
When Imperador Belial finished, the news of the passing away of Neil Peart came in. Soon my Whatsapp and Facebook where all about this sad news. So herewith I want to share one of my favorite Neal Peart memories as well. Rotterdam Ahoy I believe it was the Roll the Bones tour. Hans and I went together thinking we had arena free standing tickets. Upon arrival it turned out all seated and our place was way at the stands in the back at the side. After initial complaints by us and all around us it soon turned out that sitting at the side, next to a bar with no queues do to the all-seater had its advantages. And then we got what was one of the most beautiful arena shows I ever witnessed, with of course a long drum solo by the Professor. He really was next to Cozy Powell the only drummer that managed to get me emotional over a drum solo. Today all genres seem to be saddened by this loss which proves he and Rush were without any doubt an inspiration to many. 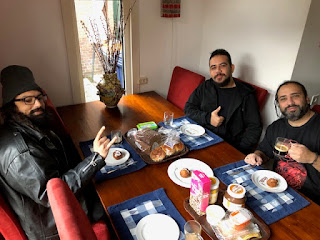 After the show I also learned that Imperador Belial's sleeping plans being basically not present, so I put my address in their navigation system and welcomed them at home for some final drinks. Turned out that Tiago's efforts to not clean the house properly became a plus, with mattrasses already waiting for a band crashing onto them. The Beast did return and good luck on the road to them.

Posted by erikprogtricolor at 16:24 No comments: