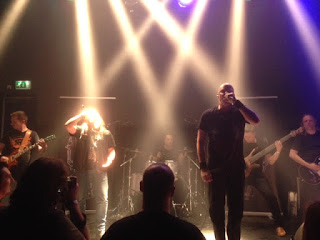 When two of the big successes of recent Progpower festivals tour Holland with Earthside the PPE crowd gets excited and many decided to see two or even all three shows over the weekend. I choose for one only and picked the Sunday in Hoofddorp. Reasons are twofold, closest to home and the fact that Duycker had the brillaint idea to schedule 3 Dutch Prog Rock and Metal bands in the afternoon which could be added to your ticket for the price of one beer. In the atmosphere of supporting your local bands I was present at three something and waited for what was coming. First band were Overhaul, a pretty young band. I don't know if they have played many shows, but they seemed to be finding their way on stage still. The vocalist fighting with his beer bottle and guitars too soft in the mix, made it hard to give a fair impression. Maybe after playing more shows I can appreciate them better, as the musicians as such seemed Ok. Hereafter came a much older band The Barstool Philosophers. They played Progpower a few years back and now had a new vocalist with them. Playing a heavy prog rock they sounded very mature. Maybe not for a CD to me, but I could see the quality. The new vocalist also had a strong voice, although his comments on their long trip to play only 40 minutes was somehwat misplaced, with people from abroad in the audience who paid to see them. Closer of the afternoon sessions were 3rd Machine, the most interesting band to me. They play metal and vocals between screaming, shouting and singing put a right dose of aggression to their heavy base completed by melodic guitar solo's. Today they played their upcoming album Qunatified Self in full. Unfortunately they did not have copies available yet with a due date next weekend. I would have picked up a copy as I liked their show and vocalist who thought it necessary to come stand next to me three times singing back to the stage. Typically a band that I would like to see again in Musicon, so hope they start touring the album fanatically. 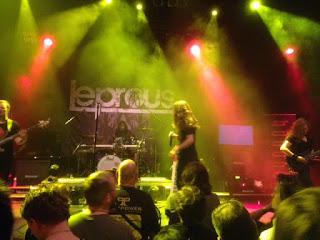 With the afternoon somewhat delayed there came some pressure on dinner. Upfront you could order food at the restaurant called The Executioner. With a name like that I prefer to check out the place first, but decided to order a burger anyway. With executioners like this I would walk towards the gallow smiling, as no fear would be sensed. Or in other words the Executioner was a somewhat timid, confused but friendly man and while ordering I knew I would miss the first half of Earthside. As they shall be back in Baarlo in October I could accept this So when I entered the big hall after dinner it turned out that most people missed the afternoon sessions due to nice weather and that Earthside are an animated band. The first tracks I saw were still instrumental, but at the closer a vocalist sung to us from the screen and it sounded and looked great. Obviously the band were enjoying themselves more than just a bit as well, so they shall be popular when coming back.
And then the stage was cleared for Voyager, to be honest the reason I came today after all. Going back over the Progpower years some shows stand out in my memory and Voyager headlining the Saturday two years ago is definitely one of them. I was curious if they could overwhelm again now that the surprise would be gone. Well that was easy, they could. With the drummer sitting behind his kit, he is the only one not bouncing all over stage. This combined with an ease with which they swap styles from pop to heavy and smiling all around. Voyager described their style best on their great red T-shirts (sold out far too fast in XL at PP): Epic Electro Progressive Power Pop Metal. And this is just what they play with the Metal weighing in most. So purists might not like their electro tapes, or their poppy melodies at times. Personally I can't care less for their sideways, as this is a band creating a party and enjoying themselves doing so. I was not the only one thinking so as the response from the audience was good and everyone seemed to have a great time. Due to complaints on the short set the previous nights, they mentioned playing one extra song. Most songs I recognized, while not knowing their titles, but some that I remember now are Hyperventilating, The Morning Light and The Meaning of I. We got one moment for regaining forces during the short yet beautiful ballad Summer Always Comes Again. For the rest it was shouting along Hey, Hey, Hey, headbanging  and seeing one of the partiest Progmetal bands at work. I was pleased to see that Voyager managed to live up to high expectations and I will be there again when they return to Holland. 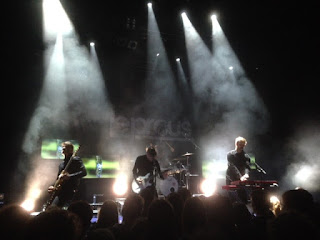 Then the task was to Leprous to follow this up. I do think that Leprous makes stunning music and interesting T-shirts. yet something is nagging with me and I think I found out what it is. Their best album to me is Bilateral, while they only grew bigger on the back of their last two albums Coal and The Congregation. So seeing them playing live means many new songs. I can still see the class in their performance. the tightness of riffing and timing of their harmonies. Still it seems to me a bit too programmed. The television sets playing on the background also ran in Baarlo and my conclusion was that I loved their two performances in Baarlo, while being somewhat disappointed seeing them twice too short thereafter. Also having five shows in my legs and Tiago home alone, made me quickly decide I would not see the full set (which I learned was close to two hours the nights before). So after some 45 minutes I called it quits and left. Hardly in a position to give any fair comment I could see that they are good at what they do, but also realize they might have grown away from me. Maybe two years from now (after their upcoming Black Metal album) I give it another try and change my mind again.