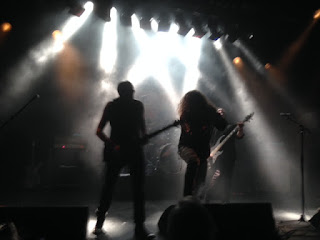 Praying Mantis turned 40% Dutch a few years ago. When I saw singer Jaycee and drummer Hans at Blokhut live performing Dio songs with their other band Deo, I knew Praying Mantis should be followed more closely again by me. Last year they released the strong album Legacy and all my expectations were met. Although Praying Mantis fall under the NWOBHM due to their debut Time Tells no Lies being released in 1981, they play melodic hard rock. If you look at their back catalogue it is pretty huge with Legacy being their 10th studio album. I own the last album, the re-release of their debut and two albums released some 25 years ago. This meant I would not know all the songs, but they are pretty accessible by first hearing. On the timing of this show, they might have been somewhat unfortunate programming two shows in the weekend of Very 'Eavy Festival. Even being a three hour drive from Dordrecht it surely took away some fans of eighties metal. Also Praying Mantis were representing the melodic calmer side of NWOBHM. Some 35 years ago especially the faster and louder bands (Raven, Satan, Jaguar) broke big in Holland. This resulted in a fairly empty Bibelot, especially considering that the dutch members brought some friends and family as well. Before Praying Mantis would be upon us King's Call had the honours of warming us up. This turned out to be not that easy. The audience did not really react to them and the presentation of the band was very off the wall. The band is German but runs around Greek vocalist/guitarist Alex. While I was expecting some melodic hard rock, the songs got a bluesy base. If one thing became clear during all songs, it was that Alex is an above average guitarist displaying great solo's at ease. Highlight to me was the bluesy version of Don't Believe a Word. Still overall they could not convince me to get their CD. Let's face it I even stopped buying Gary Moore albums, when he turned all Blues. 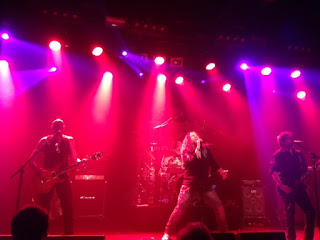 After a reshuffle of the stage, with even drums changed quickly, Praying Mantis came on. They opened the evening with Fight for Your Honour, opening track of Legacy. Sights and sounds were approved, so we could continue into Panic in the Streets from TTNL. What followed was 90 minutes of Melodic Hard Rock, played with attitude and a smile. The band comes alive on stage and it is a pleasure to see the poses Tino makes, inbetween his stage travels. Jaycee is indeed a right singer for this band, as he mastered the old classics next to the obvious new songs. From Legacy we got a debut in first ever played The One plus Believable and The Runner. The song where the audience was invited to sing along was one of the unknowns to me in Rise Up Again. I turned out to be not the only one unaware of the words, but some fans shouted along. The ballad break came in Dream On and the evening was closed with songs from the past Children of the Earth and Captured City. This was a very pleasant evening of top class Melodic Rock. Now they turned partially dutch I hope they keep on coming back frequently. 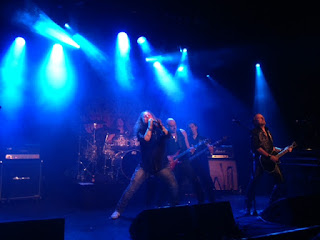