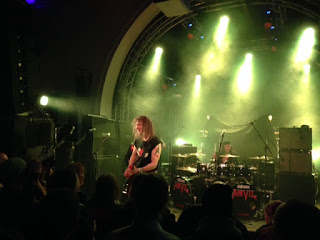 Dudok in Tilburg is a beautiful church of metal and yesterday they offered us a return to our youth or roots with two eighties heavy highlights stopping over during their European tour. Dirkschneider is Udo playing for the last time his old Accept songs and Anvil is Anvil(!). Before these two bands hit the stage Italians Burning Rome had the uphill battle of warming up people looking for glories of their past with completely unknown songs to all. I am afraid that most people were either not yet in at this early hour, or did not care that much. I must admit lasting only a few songs as well, until I got a drink waiting for my sympathy of Anvil and nostalgy of Accept. 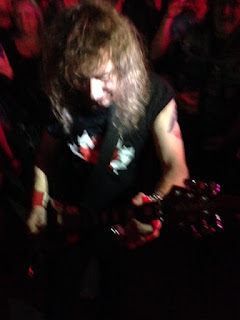 Than at a quarter past seven Anvil kicked of and very surprisingly Lipps was suddenly standing next to me when he got us all started with his March of the Crabs. Followed by 666 the mood was set and we were in for some old skool Heavy Metal as it used to be presented in the eighties.  The story of Anvil is nowadays widely known due to the best music documentary ever made (anyone who does not know that film go and look for it now, a beautiful story of persistence, friendship and bad luck). I must admit that in the eighties I only had the yellow flexi single of Forged in Fire that came with Aardschok at the time and when buying a collection some years back after the movie I did know the songs from Metal on Metal so someone should have had that near me at the time. Anvil is just genuine and they seem to be having a great time indeed. From the new album we got Daggers and Rum (a song Magchiel did not get and I quite like) and Die for a Lie (lyrically not a party song). Other highlights were to me Mothra and Swing Thing, showing that all three musician are mastering their instrument. And then it was over with according to Lipps the Epic we had been waiting for Metal on Metal. This was indeed the perfect closer as everybody knows this song and it invites for some very loud participation. I had a very entertaining show and am pleased that the movie created a turn of events in Anvil's career. Perfect festival set as well. 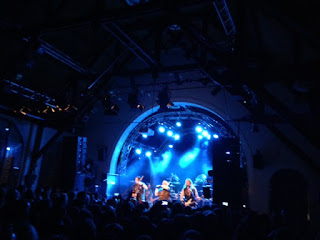 Udo decided to say farewell to his Accept heritage under the Dirkschneider monniker. This name stopped Magchiel from buying the grey Tee, which would be picked up if showing Accept, but it did not. Udo made no small work of his goodbye to Accept and we were treated on more than 20 songs in more than two hours. Last time I saw Udo was at Alcatraz some years ago and I remember liking the known Accept songs best, so I wonder how Udo without Accept continues. It might have been wise if I would have played their LP's once more before the show, as now I many times wondered which song I was hearing again until the choruse kicked in. To me the two hours was a bit long ad we could divide the show into two parts. On one side my absolute favorites Fast as a Shark, Princess of the Dawn, SoaB and Burning plus their hits Metal Heart, Balls to the Wall and Restless and Wild. On the other hand there were especially at the end of the regular set some songs that did not age that well really. For me these included Monsterman, Midnight Highway and TV Wars. I guess that for me a show of 90 minutes might have been better, but that was not the purpose of this tour. Udo's voice is not losing any power still and the band played tight. With the poses and the smiles of a German Power Metal bands Cheese is always lurking around the corner, but ths evening they got away with it.
So I was pleased to have this opportunity to  go back to my eighties with Magchiel. After all Accept was our favorite German band at the first half of the eighties and with Udo this good it sounded at times just like 35 years ago. Heidi Heido Heida one more time!!!
Posted by erikprogtricolor at 18:02