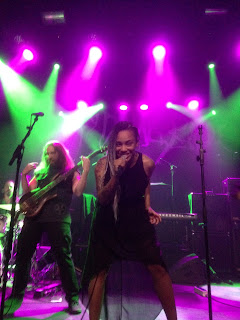 Oceans of Slumber touring Europe was something I just could not miss and from the three shows in Holland I picked the Tilburg one, as timing suited best. Actually they are supporting My Dying Bride, but as I did not have time to see much of that show I stick with openers OoS. Given the number of hits on my album review last month I can repeat myself a bit on an explanation on this great band. Oceans of Slumber transcends genres and I am totally convinced that they should grow huge in the underground scene. Their first album Aetherial made it to the number one spot on my list of favorite albums of 2013. The remarkable part is that vocals were mainly screaming, which is not my favorite kind of vocals. On this album it just fitted perfectly with the songs and anoter plus was the music going all over the place while still coordinated. I heard Death Metal, Faith No More, Progmetal and even Scottish Proggers Pallas. Out went Ronnie Allen and in came Cammie Gilbert. A female vocalist, again not necessary my favorite style of vocals. This lady however, has the power and the pressence to convert all those who believe female fronted metal needs operatic/angelic voices all the time. Their new album Winter is brilliant and very likely ending very high on my list of 2016 releases. Again the album does not limit to any genre and should please any fan of good music really. On a recent poll of the best album of Q1 2016 (metalfan.nl) they received a special mention as they did not make the shortlist, but several people commented on their album being best so far. So off to Tilburg I went with high hopes. 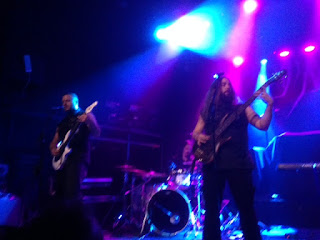 Starting early at 19:00 hours suited me fine, but seemed to result in several late arrivals as well. This might have been on purpose  as I found out soon, that not too many people were aware of the songs and material upfront. I guess that after this show some fans were gained, since what we got was beautiful. The band walked on stage one by one plugged in and started off with album opener Winter. First conclusions were: what a great band live and what a voice Cammie has. Barefooted she walked the stage going from timid appearance to full blown stage conquerer. On the vocal department the male division over three ranging from clear, grunt to scream worked very nice as well. The show was build around last album Winter only and moved between soft and delicate to all out brutal metal. Devout followed slowing into Sunlight. The central peace was my favorite of the last album Apologue (got the arty Tee from this one afterwards) The heaviest song of the album made us grow our horns on demand and was an absolute highlight. It was followed up by ballad Lullaby, with some interesting bass melodies, melting into ...This Road. Musicality on display her, when drummer Dobber moved to keys and guitarist Sean took over the drums. This proved to be a very talented bunch indeed. Closer was a song we all knew in Nights in White Satin. Those raising eyebrows now, should see this version live. Great ending to a memorable evening. 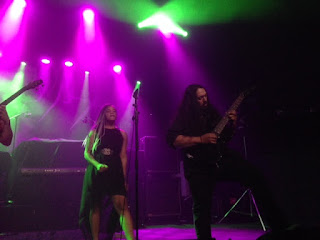 After the show the band showed up at the merch stand and took their time for everyone interested. So I could ask if Aetherial would be still in during longer sets, which they confirmed. The Blue EP was sold out, so that search stays for internet. I guess that during this tour they are gaining new fans. At the same time I am sure that at Progpower they would be one of those blasts that make a huge impact on those who never heard of them before. Sure that they will be coming back, so shall I in front of the stage. Thanking them for one of the 2016 highlights, I am now playing Coffins Like Kites and the smile shall stay for some days. Those with a chance to see them until Sunday, go early and enjoy. 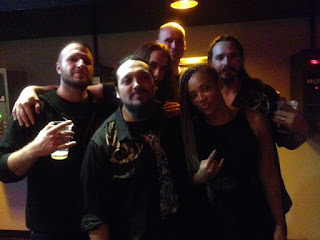