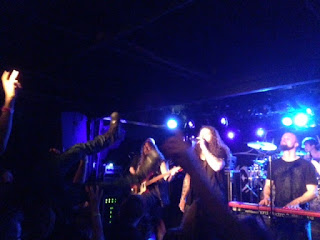 Norwegian Progressive Folk Black Metal, Norwegian Pagan Black Metal and Swedish Death Metal according to Baroeg. Admitted, not my most frequent or typical show. Fact is that Winter Thrice is one of this year's higlights on CD to me, so seeing Borknagar live stood high on my list ever since that release. As mentioned in my Cultus/Blackdeath review earlier this year I am not a Black Metal fanatic. Most bands in that region I start liking when they start exploring other areas. Looking at the members of Borknagar, I do meet people from bands I already had on CD some 15 years ago (Arcturus, Solefald and Cronian). Curious how this would come over live with three main vocalists, I first faced the two opening bands with an open mind as both were unknown to me. As this show was scheduled in Rotterdam against local football club Feyenoord playing the national cup final it was not sold out, but busy enough for a good atmosphere. 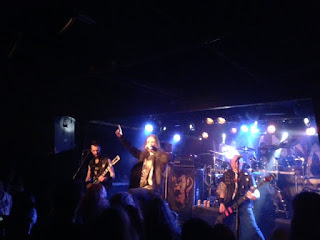 Diabolical prensented their death metal enthusiastically. They moved from fast songs to slow and heavy ones and demanded some audience reaction. For me in Death Metal I turn most to the technical bands, which makes sense given my progmetal likings. A band like Diabolical is for me fine on stage, but offers too little to start following with more interest. Kampfar on the other end was a whole different story. What an energy and stage presence we got here. This show was built up nicely and cumulated in two fantastic final songs. As they sing in both English and Norwegian I did not get any of the song titles. The vocalist playing with a broken rib asked all to move around as he as old man could do that as well. Since I believe I am older I stuck to a headbang originally, but these last two songs really made it impossible to stand still. Curious how this band sounds on CD, I got the last one and shall have a close listen. Kampfar thanked Baroeg for their ongoing support and when he stated that these shows are better than playing a Wacken festival I did agree. These shows are what keeps the music scene alive. 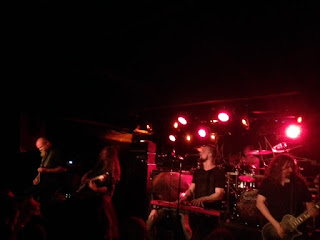 After a small break Borknagar was on. With six big Norwegians on a rather small stage it was busy. With bass player/vocalist ICSVortex sitting on a barstool it was not as hectic or alive as the previous two bands. What might have lacked on running around was made up more than a bit by the music. Opening with The Rhymes of the Mountain and closing with Winter Thrice the tour was supporting their last album. Apart from Cold Runs the River no other songs were played though, which makes sense given their large discography. To me the set flowed and the atmosphere of their music just kept at a high. Lots of heavy parts were mixed with atmospheric guitar rhythms and all vocalists leaning more to clean vocals. Apart from some microphone issues at the start the sound was good throughout. To me Borknagar proved to have it in them to win whole new markets. Upon entering (and seeing me?) I heard someone commenting how the crowd turned more mainstream with Borknagar. No doubt some purists might disconsider them, but I do not see why they cannot do an Opeth and slowly conquer prog audiences. The quality of the music is there although maybe their logo alone scares of some people. I think that Borknagar could be a great band to mix with either a Heavy Metal band or a prog metal band and gain new areas fast. Closing off I share one of the thoughts I have on an alcohol free (as by car) early evening watching the headliner. For anyone organizing a Pub-metal-quiz this question should be a tough one to many and one needs to know one word in dutch. What is the similarity between ZZ Top and Borknagar? ...It is in the drummers: Frank Beard the only member of ZZ Top without a beard. Baard (dutch for Beard) Kolstad, the only member of Borknagar without a beard. BTW I did recognize the guy from three weeks ago when he played with Leprous, great drummer he is.
Posted by erikprogtricolor at 23:39