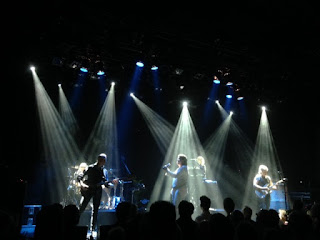 It is 1983 and my Heavy Metal Universe keeps on expanding Next to the classic hardrock from the seventies the NWOBHM is bringing us new bands all the time. Since Stampij, the best show ever to hit Dutch radio, had finished the year before, we depended on magazines to point us to new discoveries apart from some Friday Night Rock shows we might hear. Den Haag still had several Hardrock LP stores at the time with two in the centre and Kees at the border of town. The Aardschok would appear irregular in those days, so we also picked up Kerrang in those days still a magazine worth reading. Going through the issues there was more than once a band called Marllion covered. So when their debut LP Script for a Jester's Tear was released I went to the Nieuwstraat and asked for a spin on the headphones. It took me one side to realize that I had something special here and a few weeks later I also bought their Market Square Heroes EP. These albums opened a whole new world to me as until then I had been unaware of anything Progrock really, apart from some hit singles by Pink Floyd, Yes or Genesis. This album pointed me to eighties bands following a similar style (Pendragon) as well as back to the early seventies. A few months later Marillion would be opening band at Parkpop Festival during their first tour outside the UK (followed by Diamond Head debuting outside the UK that same day). I was sold for life and until today I keep following the band and Fish solo, not missing a release from either. Still as good as it was back in 1983 it would never be again, as this is one of my all time favorite albums. So I went to de Boerderij for seeing this album being performed live. As our concerts app again resulted in zero friends joining me, I went alone. However, in de Boerderij I met Onno and Mario who completed the eighties feel, as in those days we would gather at Marcel's house for a jog on the beach and a game of cards. 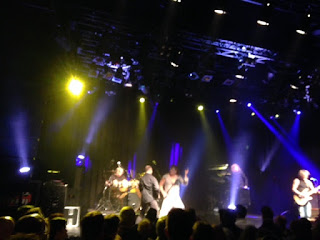 So for those who do not know Mick Pointer, he is founder and original drummer of Marillion playing on this album and the EP.  Some years ago he fstarted the Mick Pointer Band commemorating an anniversary of the album. As band he took some famous members of Pendragon, Arena, Credo, Shadowland plus that scouser from Carpet Crawlers on vocals. Amongst the five of them I think they played de Boerderij over a hundred times, but together they shine. If you close your eyes you hear something very close to the original and when you open them up again you see Brian Cummins jumping up and down in very similar Fish style with the make-up and mullet to complete the memories. On the music there is little to add really. From the most beautiful broken hearted ballad, through drug songs, class societies and anti war lyrics we know the album. It is interesting to notice how well you know these albums from the eighties as both lyrics and music know no surprises. After the album we got several B-sides and the song many have been waiting for as well Grendel. While H used to get upset when the audience is shouting for the epic, we were now invited to ask for it and probably the loudest roar of the evening followed. The set was closed with Market Square Heroes the party song. It was very interesting to see how both band and audience reacted much better to this classic than during last year's Fish farewell to Childhood tour. This was caused by the band being much better than the group supporting Fish and the audience getting the required reaction (jumping and shouting at the right times that is). I am not critisizing Fish himself here, as no matter how good Brian sung, the stage presence of Fish is unmatched until today. Closing the evening was encore Margaret with solo spots for all band members. This was a brilliant evening and it seemed that the band were enjoying themselves as well enough to return again in a few years time. Last time they played de Boerderij a live CD was recorded and this time all was taped for DVD release. A bit pointless in my view as I stick to Recital of the Script for that one. This band does not play a lot, as this was their first and only show in three years time. I guess I shall be back if they return in 2019, since I shall never get enough of this Script.