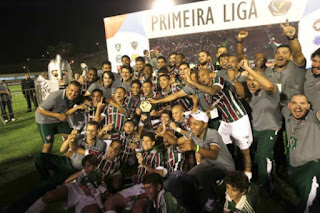 Fluminense won the first edition of the Primeira Liga do Brasil by beating Atletico Paranaense in the final by 1-0. What the value of this title shall be only the future will tell. So let me explain a little bit on Brazilian footbal for my non-Brazilian readers.

Brazil is football and to a certain extent Futebol is Brasil. The unfortunate matter here is that futebol is disorganized in Brazil by federations who only work against the football and surely are incapable of organizing the famous pissup in a brewery. Only thinking about money and television they are doing their utmost to kill football. So far nothing new you would say as is this is all over Fifa the case, but let me give you some examples. Due to a too busy schedule many weekly maches are played. The main one to be shown on national television used to start at 21:40 in order to finish the national soap series first. This means ending 23:30 on a weekday, so any away supporters have to take a day off and home supporters should also not live too far from the stadium. Most annoying I always found matches of the national team. The competition does not stop unless it is the worldcup!! So with this year the Copa America and Olympic Games coming up, you can only hope your club players are not invited to join, as they might be out for competition a long time. In recent years Fluminense's biggest star Fred (yes he is good, but Selecao is just not going to play in order to serve him) missed easily 10 competition games, due to preparations and tournaments, plus the occasional Nike-driven friendly match in and against Vietnam or alike. Finally (well there is lots more wrong with Brazilian football, but I keep it short) the agenda is a joke. Not following the European football calendar can still be understood, as summer holiays fall from mid December to mid February. Having too many matches however, is created on purpose. The national championships run from May till December and before that State Championships are organized. Only the state of Sao Paulo can come up with a strong tournament, while in all other states two to max. four clubs are too strong for the rest, resulting in many matches fans can't care less about. The argument is it supports the small clubs, question is if it really does.

So this year saw the inauguration of the Primeira Liga. Main clubs from the three Southern States, Minas Gerais and Fluminense and Flamengo from Rio would play in three groups of 4  in order to arrive at two semi-finals. This sounds easy, but still on 25 January the National Football Federation (CBF) vetoed this league and any games being played after end January. I do not know how and why this was ignored but the league went on and calendars would be set while going on. So when Fluminense lost their first match my interest disappeared considerably. A rather sensational match resulting in a 3-4 victory at Cruzeiro, made me follow this Liga again and the group was even won by Fluzao. In the semi finals in Brasilia (don't ask, that city is indeed not in one of the participating states) International was beaten after a 2-2 draw and penalties. So yesterday the final was played in Juiz de Fora south of Minas Gerais state. This is a three hour drive from Rio so Fluminense supporters appeared in decent numbers. Supporters from Atletico Paranaense were not so lucky, as they met probems on the way and arrived during the 30th minute of the second half!!! I guess seeing 15 minutes, losing a title and driving back 900 km is well deserved for supporting against Fluminense and wearing Flamengo colours alone. 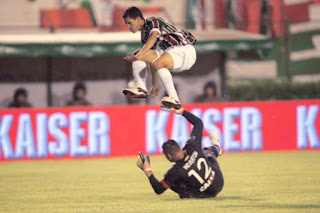 So should we be happy. Of course we should it is a title and who knows what this tournament can grow into. Still this tournament does not have the prestige for me to put the alarm at 02:00 hrs and watch the match live on a streaming site. Maybe in the future this might happen (similar to Libertadores or Copa Brasil) On the picture above you see Magno Alves. He is one of the heroes from my Rio years 1997-2000 and back at Fluminense. He is not that young any longer obviously, but he still is that player you like. Unlike Neymar (three different colours and haircuts over the last three weeks) he always looks the same, works hard and plays simple. Yesterday he gave the decisive pass for the 1-0 victory, so for me this title can be dedicated to Aahh Magnico Alves!!!!
Posted by erikprogtricolor at 13:42