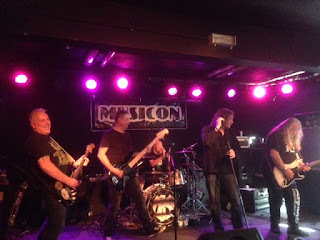 Tokyo Blade back in The Hague after 33 years. I read about their show in OLS in 1984 before this one and wondered why I did not go. We did go to OLS in 1984 and we liked Tokyo Blade. Must have been school exams or another reason of my youth that stopped me from going. Anyway we could make up now in Musicon. First we had openers Sad Iron. They are also an old band, but they still play fast. Actually they play to kill according to their statement and while I did not see any corpses after their show, soem necks should burn. Good fast speed metal with a special high for the fast guitar solo's that were all over the set. 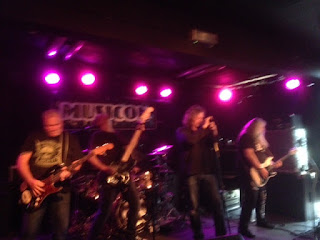 Tokyo Blade came on and what can I say that I did not write after last year's gig in Baroeg? Again they were great, hits from the past passed by and one high followed the other. The band in great shape and in original line-up. It is these shows that I totally love and although the crowd was small, many loved it as much as I did and the atmosphere was great.I keep it short and just sum up some of the songs played to describe this brilliant early night of the blade. Death on Mainstreet, Sunrise in Tokyo, Warrior of the Rising Sun, Lovestruck, If Heaven is Hell. Yes Magchiel that should make you plan your holidays better next time. Just another great late afternoon in Musicon, pity they did not bring any merch. They just released a box with all their old albums, a tip for anyone not knowing them.
Posted by erikprogtricolor at 09:17