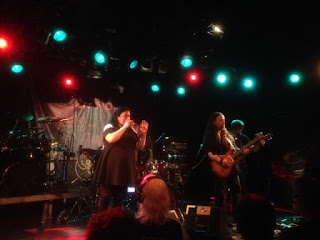 An evening of moody progmetal in Den Bosch, reason enough for Hans and me to hit the road. Madder Mortem opened and they were the reason I wanted to go to start with. Not that I think them much  better than Soen, but the fact I never saw them play live. Some 10-15 years ago I used to add them on the list of bands I would like to see the next year on the PPE feedback form. This were the years after they released my favorite album Deadlands. Hereafter they turned into this stop-start band. Releasing an album every now and then, but never touring. So now they finally were on a stage in front of me, reason enough to move closer. The person most outstanding of the band must be vocalist Agnete. She actual sings and unlike many female vocalist she stays far from operatic vocals or fairy-like presentations. This woman rocks and at times enlights us with her hysterical screams and heavy pounding around the stage. But let us not forget the rest of the band, as calling Madder Mortem: Agnete and accompaniment would be an insult to their performance really. A very solid band with no showing off issues brought us the songs beautifully. As this tour is to support their Red in Tooth and Claw album, most songs came from that one. To me the absolute highlight of the set not surprisingly came in Faceless from the Deadlands album. Starting and thriving on a pulsing bass this is were all came together for me. The fifty minutes they got, flew by and I was curious how Soen was planning to follow this. Good band, great songs and a sympathetic performance. Only the fact that they love Holland for it's beautiful weather can be filed under bloody luck. 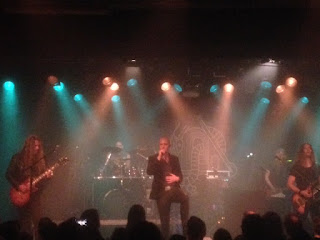 Smoke filled the room, lights from the back and Soen was on stage easy to recognize by the bold head of Joel. Soen have three albums under their belt and their progmetal is based upon groove and dark moods. Anyone coming to be cheered up, went to the wrong event as Soen is gloomy and dark. What does help is that they are great musicians and their dark songs are well crafted. I do have their albums, but did not immediately recognize their songtitles. Amongst the ones announced were Sectarian, Jinn and Opal. Overall this was a very good show, but after a while I felt a bit of lack of variation, with too many slower yet heavy songs. I do realise that this is just their style, so why complain. It is more  a hint to keep even longer sets interesting. In the encore the uptempo  Tabula Rasa was very nice, but closing with moody ballad Lucidity did not rock out the evening. Still the performance was top-class and we even got a Maiden like chance to sing along whoo-ho-hoooah guided by guitar. While the band was in topform, their roady seemed close to burning out, probably caused by an overdose of depri music. He just kept coming back on stage. The interesting part was that he came to do things one thought he might have done before the show started, like bringing water bottles, fixing setlists and moving a speaker. To me it became a funny running gag throughout the show as he would not stay three songs behind the screen. So wishing him calmness and suggesting others to go and see this interesting package when near to home. For friends in the UK, even too find out if the mysterious Black Flag is still with them, but I won't spoil that surprise. Sunday they play Haarlem, much closer to home, But that day we have 6 shows to choose from and I opted to Flots till Death for something completely different.
Posted by erikprogtricolor at 12:40