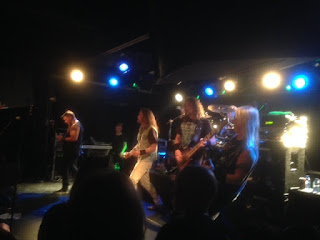 Flotam and Jetsam returned to Holland on their Forbidden Territories of the World Tour. This is the second European Tour supporting their self titled 2016 album. Last year when they played Musicon I was at Mearfest, so this afternoon should not be missed. On this tour they are supported by two interesting bands as well, so lots of thrash should come upon us. Arriving at de Baroeg Izegrim had already started. Pity as because of that I missed White Walls, the strong opener of their last album The Ferryman's End. Their set held more songs from that album (the only I know from them) and some older material. Good show opening the package. During the break the beers were allowed outside due to this sunny afternoon and next on stage were Dew Scented. This band is known as a German thrash band, but for some years the majority is Dutch. So I recognized some people on stage from a show of I Chaos I saw in the past. This band played thrash metal and did so very well. I do not know the albums, but it sounded good overall. 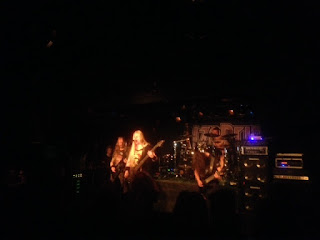 I used the second break to get the last CD from Flotsam and Jetsam and the awesome Doomsday XXX years Tee. The story of Flots is known (or should be). Classic debut album Doomsday, Jason Newstad, no more JN and possibly an even better album in No Place. For me their memories go back to my favorite Aardschokdag line-up ever in 1989, when they were the heaviest band of the day. So the audience held many fans of my generation going back to the times when all was good. Not willing to be that grumpy old man claiming that all was better in the past, but Flotsam and Jetsam gave us a masterclass in topclass old school power/speed/thrash metal. This was the perfect set honouring the past and promoting the present. Filled up with some material from their fairly recent albums ( I only missed Suffer the Masses as a surpise Storm song). Opening fast and recent we soon were transported back to the eighties with Dreams of Death and Hammerhead. Many smiling faces around and loud shouting along "Hello, How are you? Ready tonight?" The remainder of the set followed this switch in times and went down a storm. It seemed the band were honest when they stated this to be the best gig of the tour so far. When the setlist was completed they did come back for more. Amongst the obvious highlights  in No Place for Disgrace, Doomsday for the Receiver and I Live, You Die one new song deserves a special mention. The song called Iron Maiden has a vibe of  Maiden indeed. It is done so well and uptempo, that I guess if it would have been on Book of Souls to many it would be the favorite of that album. Fast, short and furious with the twin guitars going all over the place. Those who do not know that song, look it up on Youtube. Fair chance you buy the last album for this song only.  I was hoping for a good show with some old school feel over it. Flotsam and Jetsam managed to top this by a mile. Very enthusiastic on stage, playing 15 minutes longer than announced this was a blast from the past. With shows like these I really start getting convinced  that all used to be better in the past.
Posted by erikprogtricolor at 17:40