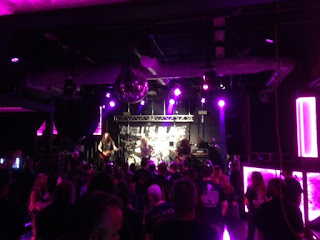 Very 'Eavy has been the past years the best Old School Metal festival Holland had on offer. I say has been as this year was the final edition. So this Saturday was the very last day of Very 'Eavy and for me the very first time I took the trip to Stadskanaal. Every year had more than a few bands of interest, but Stadskanaal is far and when I travelled a lot for work weekends away were to be picked carefully. The main reason for finally making it to VE was twofold. In my view the NWOBHM holds many classic songs. Talking about epic-shout-along-headbanging-beer-drinking-face-smashing-neck-breaking-anthems three songs stand out. Those songs are Am I Evil (way before Metallica covered it already), Angel Witch and Heavy Metal Mania. The closing of this short run but legendary festival managed to get two out of three on the Saturday. Further I should go and see once, what has been an important part of Dutch Live history over the past years. Still I already decided I would not make it to Angel Witch as time is short with Monday morning flight to Portugal, Tiago home alone and taxes to close. Missing the Friday was made a lot easier as Tokyo Blade is playing my home venue in a few hours now.  Driving north this time I realized that our small country is not that tiny after all. But hey with Vardis in the line-up I could drive up 100 Mph and back home with Red eyes even 200 Mph. Arriving in Stadskanaal at de Fox it turned out to be a Discotheek. The space was used brilliant, so you had several areas where the bars were used for serving drinks or sounds and it could happen that dark metal lyrics were enlightened by pink/purple disco lightning. Another area of the complex was used for merch and bar only with food and smoking outside. Actually it was on those experiences asking yourself, why did I never go before? Well that is too late now and this Saturday had lots of good on offer so let the music do the talking. 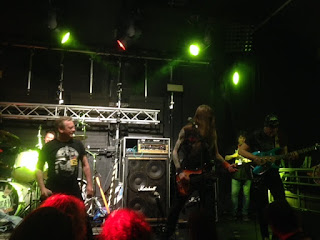 Openers Blackslash just started when I enterd de Fox. These germans play old school metal and seemed to me an answer to British bands like Kaine, Toledo Steel or Monuments. Bands all born after the highlight of metal, but inspired by it and playing very good. Interesting that they played a cover as well, but opted for such an obscure song that I even never heard of the band (or was there a pronounciation issue on either side). As being close to Germany there obviously were Germans in the house as well, it seemed they got a decent response and we were running. Next one were one of the bands I was most looking forward to: Warrior. Over the past years I saw many brilliant shows by bands I missed in the eighties. Usually this because at the time they only released a single or EP. So Warrior fits for me in the line with bands like Stormtrooper, Deep Machine/The Deep, Elixir or Soldier. All bands that blew me away live and released something new or old over the years. I had already the Resurrected compilation, turned out they have just this week released a new album. So far only as download, but Dave Dawson told me afterwards they are looking where and how to get this released on CD. Well I can be short, that shall be a must buy album. The new songs unknown to all sounded maybe even better than their hits from the past. I recall Visions, Oblivion, title track Invasion Imminent and Rise of the Warriors. All classic stuff with so many twin and individual solo's flying over the stage that it felt at times like watching a tennis match. Strangely enough I got the impression that even at an event like this many people opted for watching from afar or even hit the other bar. Well this gave me enough space up front to enjoy Kansas City, Flying High, Stab You in the Back or Dead When it Comes to Love. Totally enjoyed this gig, will see them again and for me musically best band of the day. 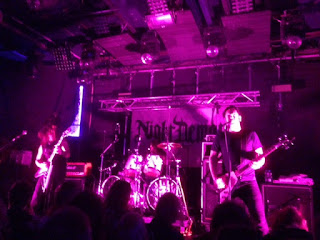 Hereafter to Lovell's Blade the impossible task to follow this up. This band with ex-members of Picture in it was the Dutch representative on the day. As described above I was recovering from Warrior so never gave this a fair chance. This was only their second gig ever, but that could not be heard. Old school hard rock sounded Ok, but one day I shall start open minded and see what I really think of them. Now a spicy pork sandwich sounded more attractive, especially as I should be fit for next band Night Demon. This trio is making a name for themselves slowly. First time I saw them was a few years ago in de Vinger in Den Haag. They had little own material so included Lightning to the Nations and Axe Crazy in their set (both also on EP) I remember asking them that night why they skipped Radar Love from their EP while playing in the city of Radar Love. Next tour in Musicon that was corrected I learned and now it was in the set at VE specially for us Dutch. Well in reality one EP and two CD's down Night Demon do not need covers any longer. Covering all three we got a very loud set with highlights to me in Full Speed Ahead, Ritual and Darkness Remains. Well actually the full set was a blast and even monitor problems and classes (400 down) could not kill the bulldozing experience this was again. They are American and young, yet I file their CD's under NWOBHM and live they kill. Most energetic one of the day. Witch Cross from Denmark were back at VE. They stepped in when Blitzkrieg and Bliksem stepped out. Well to be honest I would prefer to have seen Blitzkrieg for the first time. Not that they were bad, but it all sounded rather similar to me. I also did not get the uninspired Paranoid cover. Their own songs had the solo's the riffs and a voice reminding me of Biff at times, still I guess it suffered again from following up on a high a typical festival problem for me. Then it was Holocaust preparing the stage. They were announced as that band from Heavy Metal mania, which is true but does not serve them right. The Nightcomers must be one of the LP's I played most in the eighties and luckily today was filled with songs from that album as well. They opened after a siren wailing intro with that other classic Death or Glory. Well that got me in the mood and not just me. The audience today was a nice run through the ages. With a band like Holocaust it can happen that the younger generation is waiting for that song, while I saw before me a couple my age banging and dancing completely in awe throughout the set. Holocaust always have this punky edge to their metal and live they are raw.  It seems clear where Dave Mustaine got his spitting voice from. I think their no bollocks attitude works great on stage. Their banner a Scottish flag, bassist in a kilt and a drummer called Scot!! After Smokin'Valves, It Don't Matter to Me, Only as Young as You Feel and newer songs it all came to an end with a very strong closing trio. Going back to 1981 with opener No Nonsense from the Hot Curry & Wine live album. Then a heavy version of the Nightcomers we of course finished when the guitar solo announced Heavy Metal Mania. This song is a party, my religion and history of metal. Holocaust played the most nostalgic set of the day, doing so very sympathetic and loud and that made it three absolute killer shows on one day. I looked them up in the merch area to get their latest album Predator, but did not see them around. Later on they were watching Vardis, so guess no merch brought. 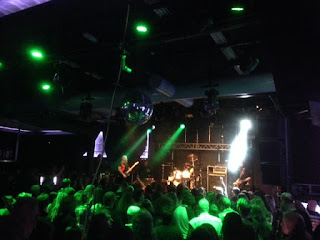 While I already knew I was skipping Angel Witch I wanted to see the start of Vardis still. Angel Witch play often in the area and I saw them a few times recently. Still I realize that no better song to close the Very 'Eavy history than Angel Witch. That must have been great, but you can't win them all. Vardis were announced as a blend of Status Quo and Motorhead and this time I agreed more. They boogie, but they metal as well. Point is that I did not drink as driver and got tired of a day hanging around. This music goes down best closer to the stage and under the influence of some liters of beer in your gut. What I could see was that the solo's were long and impressive, yet after some six songs I decided to head for the long way home. Thanks to Hugo and all at Very 'Eavy for putting up this line-up and organizing the whole event seemingly so smoothly. I do hope that these bands keep on coming down to Holland and Warrior release their album on CD soon. Now off to Musicon for Tokyo Blade, see what I missed last Friday.
Posted by erikprogtricolor at 12:00