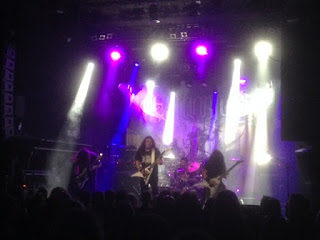 The next generation of Thrash metal touring Europe with an interesting package. Looking at the line-up I was interested in all four bands with three of them never seen before. Unfortunately lack of timely information on our amateur run national rail made me arrive over one hour later than planned in Tilburg. This resulted in no shoarma before the show and extremely annoying missing almost the full set of Exmortus. I know their last album Ride Forth and their mix is very interesting. One half seems Neoclassical Yngwie style metal and this is blended with some Death/Thrahs heaviness. This all presented in Manowar like true metal lyrics and covers. You might hear more styles in the blend as well, but this is just a rough base. So I entered the hall when they were ending some classical instrumental on speed and would play their last song. What I saw was enough to convince me that this is one great live band. The double guitar switch solo was brilliant and their playing live maybe even a notch faster than in the studio. This band should come back to Europe soon, with hopefully a longer slot than the 30 minutes they have now as opener. I will be there at the front and get a Tee as well for support. Now only seeing a small part could not justify a T-shirt really, but I got previous album Slave to the Sword. 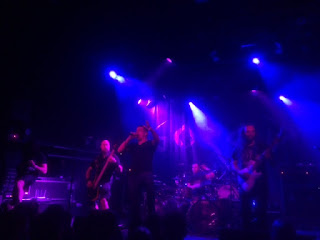 Next on were slight outsiders Gorod. Not only are they the only non-Americans, being French. They also play a more Tech Death kind of metal on this overly Thrash evening. I saw them some times before, when they used to blow Obscura off the stage in Patronaat. With their last show for me being in February only I knew what we were geting more or less. And again it was a top live set. This is one of those bands that I love when seeing on stage, but not that much on CD.  Live their enthusiasm transports into the hall and they gain on sympathy factor. Being an outsider the response today was less than with the other bands. I guess some you win some you loose on that respect. At Complexity they were the most succesfull band of the day audience response wise, on this tour they might pick up some new fans. 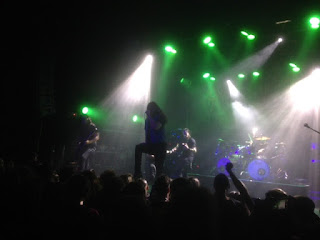 Warbringer are amongst the bigger names of the new generation in Thrash metal. Now my age justfies the comparison deal and nothing is as original and creative like the big ones in the eightes used to show us. Well, that is not going to happen here as this was one killer show of Thrash metal. Last week they released their new album Woe to the Vanquished  and they opened with the first four songs from that one. Probably unknown to almost all it took to the second song title track WttV before a fairly large circle pit got running. During the remainder of the set this pit would be there and reach near wall to wall sizes at times. Quoting one old name then,  I saw a lot of "Good friendly violent fun in store for all". During the set vocalist John Kevill promised us nicely to kick our fucking teeth out several times. As he explained after the set if their show does not turn violent it ain't a good one. As all bands had a fairly short set tonight Warbringer bulldozered on. While doing that they skipped their only album I know Empires Collapse alltogether. I highly enjoyed the whole presentation both on and before the stage and got this last album afterwards. I guess they need a longer set next time for including their 11 minute power thrash ballad When the Guns Fell Silent, but that would be an interesting break. This was a matter of came, saw and conquered literally. 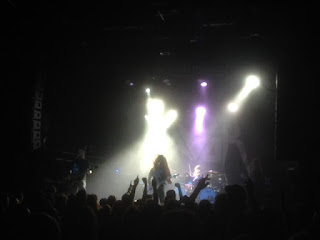 Headliners of the tour are Havok another rising star amongst younger Thrash Metal bands. In the last Aardschok they spoke about a new bassist and his role on their last album. Well live it soon turned out that this Nick is an animal on stage as well. Not only his very present bass playing, but his private circle pits on stage and loud screams inbetween songs showed a guy with some energy to kill. Havok released in Conformicide recently the possible best Thrash album of 2017. Several songs from that album were in the set. Halfway the set however, full side A from Time is Up was played.  I only know their last album, but all unknown songs sounding pretty good to me. The crowd got wildish from the start and the big no crowd surfing sign was nicely ignored. The band seemed to have some irritations with monitors on stage throughout the set, but when they played they killed it. This was one professional set of good metal and how sad I was for leaving when Intention to Deceive was started in order to make it home by train. Well I got home in the end, but still all was a mess and in spite of speaker announcements my last direct train did not wait in Dordrecht, making me lose again over an hour to find trams, busses stopped riding and my bicycle shut behind a closed door. Still a lack of trains can not kill this perfect evening. And then the old question pops up: Why would anyone prefer going to see Metallica playing in a hall filled with people wearing H&M metal shirts, while new original bands do it so much better nowadays. Maybe it is better this way and  music lovers meet in smaller venues, leaving the mainstream having their own parties.