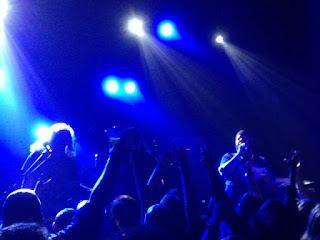 Manilla Road and Vortex in Leiden. It can't go much more epic, cult, underground or true really. Manilla Road existing 40 years and playing their first ever show in Holland! While I am really into old school metal I must say I hardly knew both bands before last night. I did not have any LP of either band. some 37 years ago I listened with Hans and Magchiel playing each other's albums and also visiting the music library at de Bilderdijkstraat for picking up on new bands to us. I remember the epic album covers and thought I recognized some songs as well. 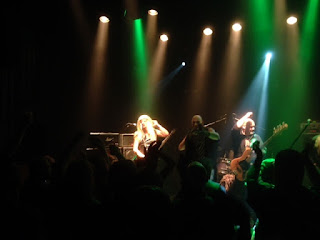 Vortex from Groningen opened and what a surprise this was. They did everything right giving us epic songs, with enough shout along choruses and presenting all enthusiastically with some humerous inbetween song banter. Looking back to the eighties I guess Vortex might have become the most cult band of them all. There were bigger bands (Picture) or ones who got more support slots with international acts (Highway Chile) but noone made such an epical videoclip as Vortex did for Open the Gate. This clip created a fuzz at the time not only positive and seeing it back now it is indeed hilarious eighties low budget metal tv at its best. At the same time this song became hollands answer to singalong classics as Heavy Metal Mania or Angel Witch. Shouting out some 148 times Open the Gate was one of the highs of the evening to me. Turned out not just to me as the decently packed Gebr. de Nobel was fully enjoying this support slot. They do not tour all that often, but I hope they come back for more soon. Drink Bat Blood, or Hammer of the North were great. Apart from a great band special mention for vocalist Jurjen. His dramatic presentation reminded me of a metal version of Fish in the eighties, including the make up, the throwing axe and a surprise when close to the end his hair came off!! A truly classic set. 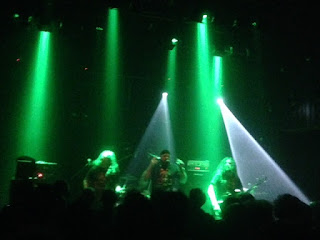 Now that all were warmed up well the set of Manilla Road can only be described as victorious, staying in battle metal terms. Opener was a known one to me in Open the Gates, further we went through 40 years history. Even not knowing their music it went down very well at first hearing.Some of their albums came out on Black Dragon Records, a label I did follow closely with bands like Heir Apparent, Exxplorer, Liege Lord and Chastain to name just a few. Manilla Road might have been the biggest band on the label and I am trying to remember why I missed them and have albums of the others here mentioned. Anyway the set moved on from one highlight to the next and it is a pity I did not get the songtitles as one song ended with a guitar solo of about five minutes, which completely blew all away. This solo came from original member Mark Shelton. Interesting fact about him was that he sung some songs as well and did so with more ease than talking inbetween the songs. That voice sounded like 40 years on the road. Playing some two hours this was an epic set indeed and everyone in the crowd seemed to love it as the atmosphere was more than great throughout the night. Vortex thought about bringing this crowd along on tour, while Manilla Road should wonder why they never played Holland before. This evening was pure promotion of good old fashioned heavy metal and those who passed have no idea what they missed. Thanks to THHMA, Nobel and Doomsday Alliance for giving us this evening.