The search for new music is always there. Going to shows, reading magazines and webzines. Yearly this results in many great discoveries. Sometimes however, the music finds me when bands send me links to their last albums. This can be of different qualities and tastes really. Last weeks two bands approached me with albums really up my alley, so I am more than pleased to spread the news. 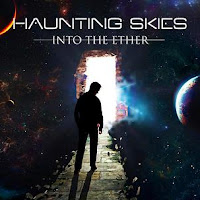 Haunting Skies - Into the Ether
A progmetal band from Kansas who released their debut album last week. When receiving music I first search for information on the band. Turned out this album was released through an Indiegogo campaign. Unfortunately only US inhabitants could participate. Probably this has to do with crazy current US mail tariffs, which is killing their underground exterior exposure. I said unfortunately, since after hearing the album I know I should get this on CD. The album opens with Manifestation also released on Youtube as a single. While not being my favorite track it gives an idea of what we can expect. Reminding me at first of a heavier Enchant they later on include some modern metal with harsher vocals. Coming at the vocals they are not as smooth as with similar progressive metal bands who tend to edge near power metal. I quite like that as it gives them something own in their sound. The whole album has a good flow with several songs linked directly to each other. My favorite songs probably are Redeemer and I Foresee Catastrophe, where we have only clean vocals but the fast tech metal part I love is very present. So now it is waiting for ways to get this on CD, see the complete artwork, read the lyrics along and enjoy this album fully. I shall probably include them on my wishlist at the ProgPower Europe feedback form. Then again they never take any of my tips serious. My recommendation check this out, you might be as pleasantly surprised as I am. 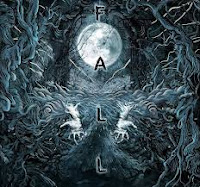 Fall - The Insatiable Weakness
This band contacted me as I have Oceans of Slumber on my not updated playlist. Listening to their album I could hear some points in common with OoS great debut Aetherial. Yet if they would have said we send our CD as you love Scar Symmetry, I would understand even better. The Insatiable Weakness was released begin 2016 and yes I missed it. It only makes you realize how much great music there must be out there you will simple never hear. Fall play melodic progressive death metal. I mentioned the Scar Symmetry (or Solution 45 for that matter) reference, as also on this album the switch from harsh to clean vocals is rather sensational at times. Live I can appreciate the extreme grunt full blow in your face. On CD I like it a bit more varied at times. Yet the song that varies the most here is Harvester, the one with female vocals blended in. To be honest my least favorite track as her voice lacks power next to the brutal riffs around her. With only one minor miss at parts, this is one great album so off to Bandcamp I went. Stating above that US Mail is killing music, herewith another great example. While the CD is fairly priced at US$10 the mail charge through bandcamp would be $40. This is just plain stupid paying four times more for mail, than for the actal album which had so much energy put in it. So anyone interested contact the band directly, for getting better fares. Finally anyone not interested yet, but collector of anything by Dirk Verbeuren (Soilwork, Warrel Dane, Devin Townsend now a.o.Megadeath) he drums on this album, so that quality is guaranteed.