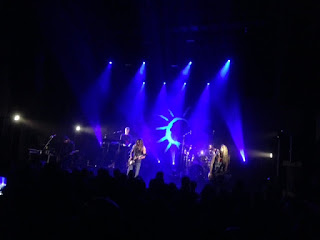 Pain of Salvation released their best album in 15 years In the Passing Light of Day. All reasons for a European tour and Holland was included with three shows. Closest to home Gebr. de Nobel in Leiden and suddenly almost our complete gigs app group appeared and getting beers for all became a mess. Openers were Port Noir from Sweden, a decent band. Nothing shocking to me, they reminded most of us on a lighter version of Leprous. Most interesting was that when they finished the hall almost fully packed with even the two balconies crowded. Nice to see that good music can attract many nowadays. 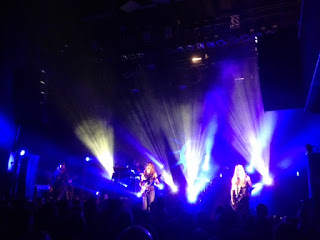 After a short break with lots of catching up Pain of Salvation came and played three songs from ItPLoD. I actualy hoped for lots of this album and we were treated in total on six songs including the three epic long ones. The band turned out to be in good shape and the sound was fine as well. After Linoleum the atmosphere moved some notches up, when they decided to play three songs from Remedy Lane including Beyond the Pale one of their best songs ever. On a roll now they followed this by their ubersong of one chord Ashes. This high could not be kept with a return to the last album and Road Salt, but you hardly can call it a big drop. During the mainly rocking show Daniel was short of speech, but the political intermezzo was unnecessary. Pain of Salvation have always been a political conscious band, remember the orange No War shirts at Headway years ago. Still to me their upset seems onesided and asking the hall to shout fuck Trump is pointless. An unprepared idiot he might be, in my view Assad, Erdogan, Sisi, Poetin, KimJong Un and Duterte to name just a few are much bigger criminals, idiots or to stay metal devils. Still many people shouted along and I was pleased they got on quickly and played again. Next to this miss there was a high in the absence of Disco Queen, a song that is a joke turned very old. The ultimate high of the show to me came in the encore when The Passing Light of Day was played. This must be the most emotional song that shall be released in 2017. As there is a very direct link with many of my personal lows and Pain of Salvation songs, this one describes very well the feelings I also had while in hospital. Watching it slowly slip away alive and kicking is a moment to cherish and remember, so thanks for that. This evening we saw old glories from Pain of Salvation coming back mainly based upon their strong last album. Those who feared Pain of Salvation developed away from us should be very pleased, just like me.
Posted by erikprogtricolor at 17:39