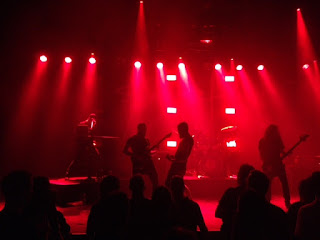 Persefone and Poem, well that is a package I was looking forward to. more than a bit. Persefone just released with Aathma one of the potential best albums of 2017. Poem made it to my top 16 of 2016 last year with Skein Syndrome. So if this show could meet the standard of their albums we would be in for a treat,  Before answering those questions, first some random observations on the night. Entering de Duycker, there was a sense of panic hanging in the air. The computer system was down, resulting in no beers on tap. Seems we can blame all on computersystems nowadays. Not willing to give any potential terrorist any ideas, but if I was to create havoc and total chaos in Holland I know which computersystems to hack. Further tonight we saw 10 people on stage. All dressed fully in black with no prints (or was Stavros wearing blue shorts?) Out of 10 people 8 had short or no hair on their head, but a beard for compensation. The only two Persefone members with long metal haircuts did not need a beard. Last time I saw Persefone I was bitching a bit about vocalist Marcs underpants on display the full show. This time he had money for a belt and when the tanktop came of at the end only a small strip underpants was shown to us. Finally it was interesting that de Duycker decided to warm us up for some progressive death metal by playing Prog rock superband Kino. Anyway after some 20 minutes the beer started flowing and we could concentrate on the music. 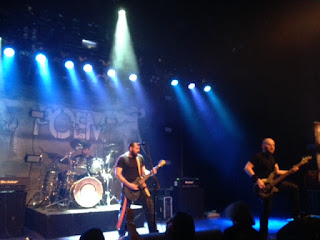 Poem opened the night and I think they did so with Passive Observer (sorry not taking any notes still). It turned out quickly that Poem is a great live band. Their music is catchy, heavy and groovy. On my earlier reviews I mentioned grungy, which I did not hear live. I think my reference came from the voice of George Prokopiu. Especially when he ups the volume at times he sounds like the third brother of Chris (Soundgarden) and Peter (Somnambulist) Cornell. The music itself is much more progmetal, without the need to show off any skills focussed on the mood of songs. I believe we got the full Skein Syndrome album, although in alternative order. The level stayed firmly high throughout the show and I did not have one specific highlight. Although it was nice being able to hum along with some choruses like "Is this like falling to the river" in closer Weakness. After the show I did get their first album and playing it now I see why they played the second album only. Apart from George it is a whole new band now. Nice guys they are and I got to pass Andrew's hallo to Stratos. 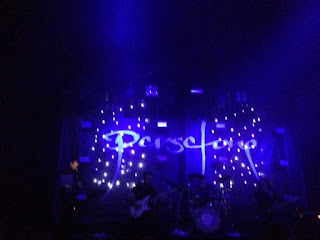 After the short break talking with Poem, Persefone were back in de Duycker. Some guys told me before the show that last time there were 12 visitors in the small hall. Later I remembered that they got included last minute with Loch Vostok indeed and I read about that the following day only. This evening was timing wise always hard to attract many, but still some 100 people were present I guess. This might sound disappointing for a band that just released album of the month in Aardschok. Still we have to take into account that the long Easter weekend had for the Progmetal fans Haken and Pain of Salvation already touring Holland and for the melo-death lovers Dark Tranquility played the night before nearby, I skipped that last one, fighting an upcoming fever, just to be fit for this double. Well it did not take long that my health saving paid off, as we got a great show by a band in top form with a sound that made all come through very clear. Before the show started Hans and I wondered why the show was not moved to the small hall, which would be nicely packed for the night. Well the answer came in vocalist Marc again. He has a lot of energy to kill and during the show he franctically walked up and down the stage creating an energetic atmosphere coming of the stage. It seems at times that someone shot him from a catapult at the side of the stage which kept him running and turning until the elasticity had gone. Great performing by him highlighted in the encore when he asked for a circle pit. Playing basically to a Prog power audience, this wa snot happening after which he jumped in himself, started a pit and got some circling going. Horns up to that \m/. Back to the music I must say I recognize songs, but do not always know title or album they come from. I was curious how Living Waves would be played as this is their current single. Guest vocals from Paul Masvidal came from tape and this killer song would have fitted very well at Cynic's Traced in air in my ears. The balance throughout the show was kept very well, with even a ballad, where the clean vocals of Miguel took centre stage. Throughout the set these vocals blended in nicely with the mainly screamo voice of Marc. After some 80 minutes it was over when the opening two songs of Spiritual Migration were transcended upon us. Persefone gave a perfect show and proved to me being fully able to headline across Europe giving us a great show. Did not get their Tee as I have the Pledge collectors item one. Maybe one day they break really big and the world is surprised that Andorra gave us such a good band.