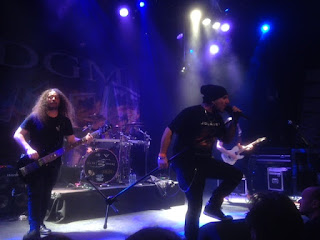 The Triumvirate tour with three Itailian Power metal bands passed by de Boerderij. So why are there two names only, one might wonder. Well this weekend Josie came over from Portugal and her plane was supposed to land 22:25. When the time schedule was announced I could see that DGM was supposed to play until 21:55, so a perfect match. from the three bands DGM is the one I know and like. I saw Secret Sphere before, but not tonight. Arriving in the main hall Trick or Treat had just started. Not knowing them it took about a second to hear that their inspiration comes from Helloween some thirty years ago. The voice, the fast riffs and solo's and the happy metal mood transported us back to those Keeper albums of the past. Maybe not as good as their examples I liked the enthusiasm they showed on stage. Even if playing for only a few fans they gave it their all. The circling dance steps were hilarious and the bass solo of several minutes was technically better than Joey de Maio. Of course with Italian Power Metal bands cheese is always lurking around the corner and tonight we got a full platter. Still I liked the performance and put this down as not shocking musically yet entertaining. Minor tip, if you have problems in playbacking backing vocals don't put them so overly loud in the mix. 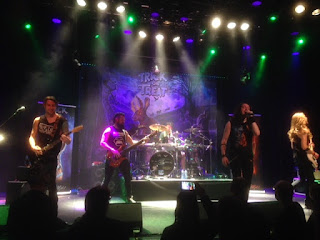 After a very fast break DGM came on. This band I saw before at Progpower (twice I believe) and  mixes more prog with their power. On the way in I played Momentum in the car and I also have one oldie. So I know them, but not that good. Still I recognized some songs and Reason is the best song of Momentum and in the set. On the CD Russel Allen sings that one and Symphony X is at times not that bad as a reference for their music. DGM presented us a very fast and solid show and the response from the still not huge crowd was there to match it. We were asked to sing or clap along almost twice per song, but even the unknown songs had catchy choruses easy to shout along (Hereafter). In ballad Repay, we got some relief from the almost constant uptempo headbangers. All in all DGM showed to be a good live band again and my interruption on the way to Schiphol was worthwhile. Now I have to wait and see if two hours of power metal and a longer set ending later, result in some speeding tickets on route.
Posted by erikprogtricolor at 10:37