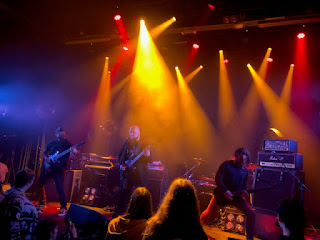 The biggest venue in The Hague is het Paard and to say they put on a lot of metal would be fake news. So when they have UDO in February, this package in March and The Hague Metal Fest in April I try to support in order to get more metal in. Luckily I was not the only one on a Tuesday night as it might have been the small hall, it was filled up pretty well. Opening band were Herod from Switzerland / England. They state playing progressive sludge. What caught the eye were the three guitars and no bass on stage. Yet in spite of three guitars the man stealing the show at times for me was their drummer. some serious fast and tight hammering from the back. While all sounded pretty OK to me it was during the last song when Loic from the Ocean joined on vocals that variation increased and the best song had arrived. 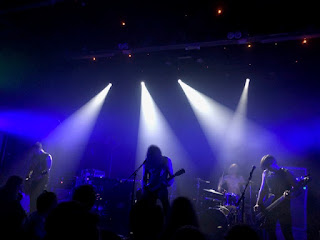 Next band were German outfit Downfall of Gaia. Now I listened to a clip on forehand and got interested. This band played mainly long heavy landscapes. Vocals from the bass player, were blackish, while the other two more screamed. Yet this all was standing against many long melodic solo's and repeated structures. To finish matters off the drums were mainly fast. All together this blend worked very good and their show flew by to my ears. Afterwards got their last album Ethic of Radical Finitude and playing now it also works on CD at home. Interesting band. 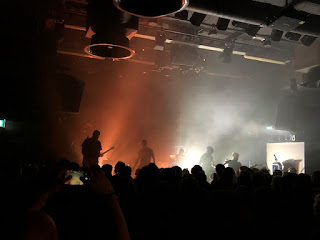 Headliners were The Ocean (Collective?). Over the past few months I saw this band already  at Progressive Alliance with little impact due to timing and at Complexity with a good show. This time it was even much better as I was not distracted by other festival activities. This band plays also progressive music with heavy post rock mixed in. Their use of screams, versus calmer intermezzos works very well though and their vocalist Loic is a good front-man. Or at some point even good balcony man, when he walked up sung from the balustrade and jumped down upon the audience to be crowd-surfed back to the stage. When he moves to singing I hear some voice that would fit a grunge band, but before that scares you off he long moved to screaming loud at you. After three shows in a few months I even started recognizing songs and was convinced to finally get their last album, only to find out it was sold out. Even though on a Tuesday with three bands this might have started earlier, I was pleased with all three bands and can only suggest to go and see them when passing near you.