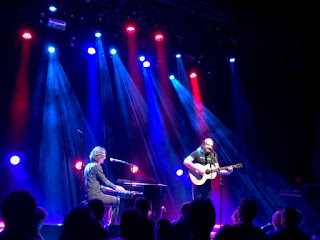 Damian Wilson and Adam Wakeman released some CD's together already and now have a small tour through Holland. While their albums tend to be acoustic and calm affairs, we six mainly came hoping for some music from their Progmetal band Headspace. Last time I saw them play together was with that band also in de Boerderij. Individually I do not recall when I last saw Damian Wilson, might have been when he was still with Threshold. Adam Wakeman was a strong force last year in the Attice Arena with Ozzy. The bad news of tonight was that Ozzy won't be touring this year (so how about a Headspace tour in autumn?) As the evening was mostly two man telling stories and singing songs, I also shall pass my anecdotes on Damian Wilson through the years. 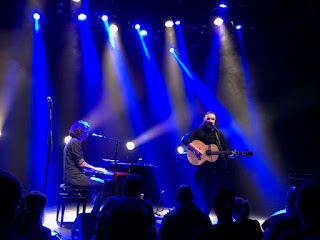 As this is supposed being a show review some very short comments on the gig as well. Boerderij main hall is too big to create an intimate atmosphere. Three halves was a bit long and one break too many for several. The songs were calm and quiet as expected with some absolute highlights to me. The Big Day (Headspace) sounded great even stripped down. Life on Mars? had a great introduction and also showed Steve Hogarth how to cover this song with power. Homegrown is Damian Wilson's best solo song I guess. The jazzy piano Sabbath cover only halfway rang a bell when the Iron Man chords passed by. And finally Damian Wilson showed again being one of the best vocalists around no matter the genre. First time we saw Damian Wilson was in the old Boerderij before the move (early-mid nineties?). He was singing with Landmarq and did his audience walking routine already in those days. Jeroen first shopping in the next door Coffee shop, thought during that trip he recognized the guy next to him from our local pub and greeted him by pubname not fully realizing that same bloke sang for us on stage the past hour or so. One of Landmarq's ballads Embrace turned into a favorite of Josie when I put it on a mixed tape and was played at our wedding before the live music started. Somewhere in the early 2000's Damian Wilson returned to de Boerderij and I got his solo double Disciple/Grow Old with Me. Now his lyrics were personal and also about his children and being a father. With Tiago just going through a tough start in life I thought it nice to bring home a CD dedicated to Tiago. Now my lousy or drunken voice or his bad ears made me come home with an album dedicated to Diago, awfully close to that sniffing Argentinian c*nt (Tiago is also Brazilian). Translating that into Dutch reality I am pretty sure you won't find any Dutch parents calling their son Lothar in the eighties/nineties. Maybe that same night or a few years later we saw Damian now as one of the vocalists of Star One, a more space-metal Ayreon. The full band was wearing silver outfits matching the lyrics and more important made with lots of love by Lida and Yvon. Well not Mr. Wilson as he looked slightly sharper in his own silver outfit. But like always his voice ruled the evening. So in the end I do not know how many times I saw Damian Wilson sing and neither with how many bands or projects. I do know I never saw him as calm as yesterday. Yet if you like two sympathetic and fairly talented guys telling stories, spontaneous or not, and sing really good you can still catch them this weekend in Amsterdam, Venlo and Zwolle.
Posted by erikprogtricolor at 09:56