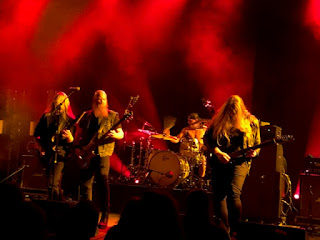 Prognosis yet another new festival of Prog in Holland. It actually was a two day event, but I had better plans on the Friday. Upon arrival I heard by basically everyone I know, that I was smart as Friday was over sold out. Unlike airlines they did not send people home, but just closed halls when overful I understood. Now Prognosis might be the youngest festival of Prog in Holland, their budget obviously is biggest of them all. One can question if it makes sense to pick so many of the top level prog bands on your first edition. Yet I am not complaining as the Saturday offered me the chance to see some bands I never saw before. Not finding anyone willing to join me from The Hague I knew I would run into friends over the day, so one week after Killfest it was hallo Effenaar again. 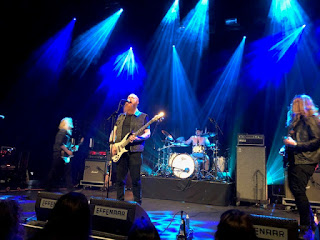 The band opening the Saturday was called Prognosis like the festival. I heard one song on forehand and knew I wanted to be on time to see this. Even to such an extent that I had to kick Voodoo Vegas out of my house at 12:00 being a poor host, so sorry for that my friends. Well Prognosis came on the big stage and I soon knew I had a winner for the festival here. This band plays that typical tech metal I love. Two shredding guitars, voices heavy yet singing and all in an uptempo that made you move your necks if you wanted or not. With people leaving halfway I suddenly found myself moving to second row and feel the power. I totally loved this set and the energetic drummer hammered on wildly even after loosing one stick and apparently have no spare at hand. Yes they could open with Hallo Prognosis festival, we are Prognosis and at the end they asked to support the band and festival. That is just what I did got both the CD and Tee and was sorry to not run into the band during the day for thanking them for this show.  What a highlight to start. 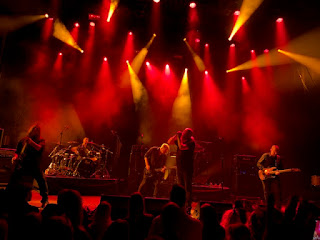 In the meantime Golden Caves started in the small hall, but I just knew I better skipped them. After the very high energy gig of Prognosis I am sure to me Golden Caves would not be able to grasp my attention and get into their calm show. A second even better reason was that I wanted to be on time for my second headliner of the day Green Carnation. These Norwegians disappeared for a while, but came back with a DVD release last year. They played ProgPower before, but it was one of those years, work made me travel over the weekend making it unable to attend. I never realized before that I own all studio albums by this band. When they opened stating "Pain is Self Inflicted, Cause is not" I recognized the song from their debut. This was followed by Sweat Leaf from their last album acoustic verses. This band meant for me two highlights out of two shows. They did everything right. The vocalist has a great voice and presence. The music is moody and heavy, yet at the right times fast enough. The songs were passing their history, including one new song and technical problems were overcome in a way that looked calm, funny, sympathetic and professional all at the same time. Highlights if any maybe Crushed to Dust and Myron & Cole. In reality the whole set was a party and if they release this new album I would say first day headliner for PPE 2020 can't be much of a search. Anyone I've spoken with on this show afterwards agreed that Green Carnation ruled Prognosis festival. 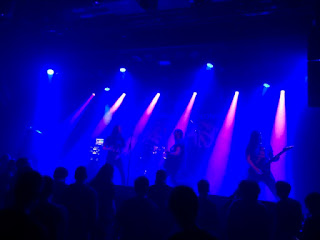 Now after such a high one needs a small moment to get back to earth and have a beer. So I could not be in the small hall in time to see Letters From the Colony kick-off. This was unfortunate as later on it was packed and I first went for some food. Now I learned fast and became strategic, so when Devin Townsend was about to start in the main hall I rushed to the small one and saw the last songs by LftC. This band seems to be unlucky on Dutch festivals this year with stages (Complexity) or timing (now). I repeat a pity as that what I did see was full of energy and with enough variation to keep me interested. Now hoping on a small clubshow one day, so I can see their set in full. After this all I moved slowly upstairs to see the end of Devin Townsend acoustic. I thought to see the second half, but he played slightly shorter than scheduled. On Devin Townsend I am mostly divided. I do appreciate his total artistic and vocal range. There is no doubt on his talent. I have several albums by many of his projects, but to me at times they can be overwhelming. He can go so all over the place that it is hard to catch up at times. At the moment he is having an acoustic tour (an in fashion thing it seems, but noone shall beat Witherfall on that) This meant he was alone on stage with a guitar and some laptops. I do not know all his songs, but when he lets out a scream it is just amazing how acrobatic that voice is. He ended with a song from The Ocean so I am supposed to recognize that, but not sure if I did. 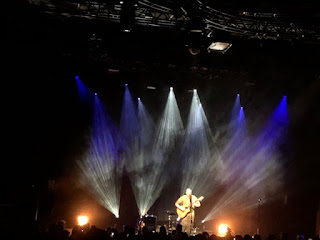 After DT many people left for dinner outside, so suddenly the small hall could even be accessed normally. While I do have a CD by Nosound, in the end I decided on hearing them from a distance, while catching up with Michel. We both wanted to see Witchcraft as well and for me that would be the festival closer I already decided given the shortish night and last bands of the day. Witchcraft was a bit the odd fish out of the water here, as they play doom metal with some psychedelic traces. Again a band I did not know in advance, but that sounded good on internet. They came on, tuned their guitars and slowly got started. Soon it seemed that their vocalist was a bit of a character. If you state regretting not being big enough to forbid pictures being taken, you tend to be on the wrong festival in my view. So I did take a group in action picture, but won't post same. As they looked very average also no need to describe them. Later on I heard more people being pissed off with his attitude. I could not care much as the music was actually very good. I liked their doom which was pretty uptempo for doom and well sung. Attitude or not at timed even Chris Cornell passed by in his voice. Three guitars gave a solid wall as well to build on. So I decided to get music of them after the show, only to find they did not bring any only T-shirts. So musically Witchcraft closed the day of in style for me and seeing three highlights made the trip very worthwhile. I suffered less than most from the overlaps, but do wonder what to expect next year. Another highlight was running into many PPE friends, with even the possiblity to congratulate in person the recently married couple of bold northern European progmetalhead and latin woman (somehow I relate to that).  The future shall show if this can be a long term festival, but on atmospheres all agreed that this shall never match PPE. If they bring bands like today I can live with a different atmosphere anyday.
Posted by erikprogtricolor at 17:43