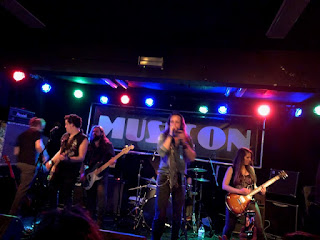 Voodoo Vegas are British, but Brexit won't stop them. So their tour was called just that and Musicon was the opening evening. Now that I opted not to go to Progression due to overlaps I already decided to visit Musicon on  Friday night. In order to increase the fun I also was able to host the band after the show, which always gives a nice insight on bands touring. Now I did not know Voodoo Vegas on forehand, but started wondering why. I did see Y&T and the Dead Daisies recently when touring in Holland and Voodoo Vegas have recently supported both. Somehow I managed to see just the other tour, so this was new territory for me. Trying to push through our app group had limited success, but I had a nice evening with Magchiel, Yvon, Rene and Pieter turning up along the evening. 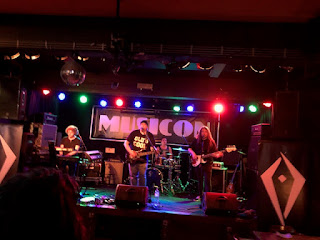 There was a support band as well. This sounds logical, but given the fact that the scheduled support pulled out the day before it was an achievement. Fire Within are from Middelburg and opened for us. They play a kind of symphonic power metal and do so well enough. What afterwards stuck most in my mind though were  their covers of Abba and Europe and the pissing guy. Let me explain the latter. Three fans of both bands walked closer to the stage and sort of banged along the sets. Now one of them bought a pint and instead of drinking same he kept it in his hand and slowly spilled same all over the floor. Standing a few meters behind him it looked like he was dropping and pissing in after wee modus, very strange indeed. Don't know what's wrong with the youth of today, but if I spilled beer like that some 30 years ago, several friends would seriously smack me in the head. Sorry Fire Within, but that shall stay my reference, although the one but last song sounded really good. After a short break where the floor could be dried and our friend was later asked to put his beer at the side Voodoo Vegas had changerd and hit the stage. It took me about two minutes in their gig to realize again, that England is full of promising younger bands that just get no exposure whatsoever over here, Also We could see that nowadays youth is not interested in good old hard rock. Voodoo Vegas just play hard rock in a style we were brought up with. I thought at times a bit of Little Angels, but also one song hinted at Aerosmith. So we might not have been with many, but after the gig I only heard positive feedback on the show and enthusiasm transmitted by the band. They closed the set with King Without a Crown and that song should have been a hit if released somewhere in the eighties. Very catchy and grooving.  During some songs Lawrence even took out a harmonica to give an old vibe to the evening. So  a winner of an evening I would say. Losses were also on record as Voodoo Vegas is one of the bands suffering seriously from the Pledge bankrupcy. I do not know the details of how that happened, but the victims are many. In their case the newly recorded 3rd album can not be released, as Pledge did not pay the people who needed paying. Frustrating to say the least. Yet this band seemed to be made of very nice and optimistic people. I can know as we had a pleasant closure of the evening at home and breakfast the next morning. Go and see them on tour this week, even if Brexit won't stop them. 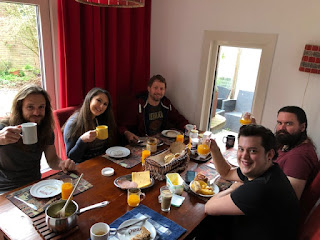