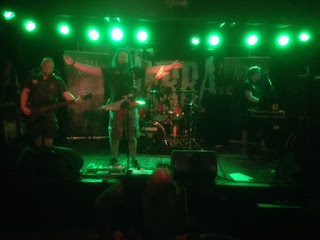 Aterra are a metal band from Poland. Unknown to me, but with two nice local supports nothing stopping me from an evening in Musicon. Now I read recently that a Polish hip hop night resulted in two packed evenings with even the beer availability almost running short and the new floors baptized in beer. Unfortunately also in Poland Hip Hop seems to attract more people than metal as there were some Polish people, but not by the hundreds. Still it became a good evening packed or not. 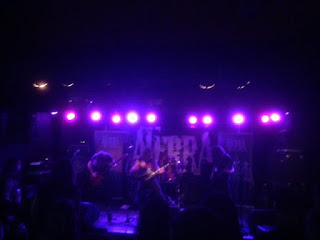 Defazer already started their set when I came in. Human beings thrive on routine, so for me a Friday or Saturday night show in Musicon means 21:00-24:00 live music. Only at 20:15 I saw at home that the start would be earlier this evening, but in the end I believe only missing the opening song. Defazer are the band from The Hague's Bay Area as their influences are easy to track. Now this was the first time I saw them in this line-up and it was good to see the band was at ease. Both the new bassist and drummer joined in the party without any obvious problems at least to my ears. So Defazer gave us their usual thrash metal kick under the bottom and we were warmed up. 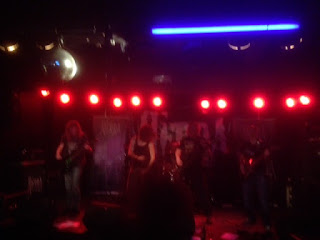 Callous Intent are also from the region playing thrash/death metal. Last year I saw them at Paardcafe and I believe the set did not change that much. I say this as I did recognize the song titles with their violent topics. My favorite is their ode to the killer-Uhu, a real life story known only to Dutch people, which few would have thought making it to a song. Their set is slightly heavier than Defazer, but goes down equally well. I hope to see them more often on the bill of shows in the area. For now the biggest coincidence was that while I picked up my Vektor T-shirt for the night, two band members did the same resulting in me playing Black Future now by lack of new bought music. 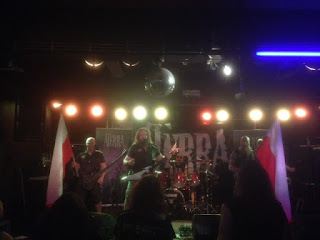 Aterra came on last and gave us over one hour of their metal. They seemed to blend a bit between styles, while the constant factor was their groove, which was omnipresent. Also their looks were a bit confusing to me. The lead guitarist/vocalist looked thrash/death. The second guitarist looked stoner, the drummer with his black painted eyes looked Black metal and the bassist looked hardcore. Then finally there was a fifth member behind tiny Keyboard and laptop looking neutral. Luckily their music was not as uncoordinated as we got a pretty good set. A few songs were even sung in Polish, which their countrymen appreciated. Close to the end of the set the band explained that Polish people are proud to be Polish. So out came two Polish flags and everybody was asked to stand up to the Polish national anthem One guy in a red Polska T-shirt started even kissing the flag. Now I lived abroad a few years, but somehow can not imagine myself in those years attending a show of a dutch metal band in orange T-shirt with Holland written on it kissing our flag. Conclusion Polish people are proud to be Polish indeed and we Dutch prefer complaining and pointing out what is wrong with our country and the world. Nationalistic or not Aterra did manage to also create the first Wall of Death I saw in Musicon. Ok it was no D. foking T 8 billion USD wall, but a tiny wall clashed together. The final song was again in Polish and seemed some sort of Rage Against the Machine song. This closed an enjoyable evening of metal in Musicon for me and I hope to be back more as a first Musicon show of the year in March only is too late really.
Posted by erikprogtricolor at 11:51