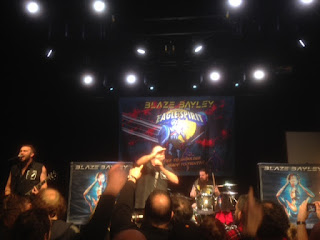 Blaze Bayley returns to Leiden, like he does with every new album. He is of course known from his years in Maiden  in the nineties. I already stopped getting all Maiden albums in the blind by then and also do not know his solo work. Still Hans and I felt like an evening of Maiden inspired music was a nice way to spend the Friday night. While not knowing the music, the band were no stranger to us as Absolva is touring as much and we did see them many times over the last years. Digging in my memory I also thought back if and when I saw Blaze Bayley before. The only certainty I have is 30 years ago as opener with Wolfsbane of the best festival line-up I ever saw (Aardschokdag with Queensryche, Crimson Glory, Flotsam & Jetsam, House of Lords, Vengeance and Leatherwolf !!!!!). That is long ago so let's see how the man performs nowadays. 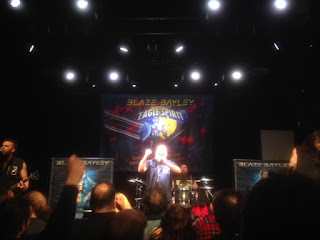 This evening was the opening night of the Eagle Spirit tour. Blaze decided there would be no support and the band would play over 100 minutes. The focus of the evening lay on the recent trilogy on William Blake. Now not knowing any of the songs did not have an impact on enjoying the show really as the style is very much Maiden influenced. So we could shout along with the whooo-hooo-hoooos and raise our fists upon command. What became clear very quick was that Blaze is a genuinely nice guy. It seemed to me he even made an effort to speak slow and clear helping foreigners to understand him. After the show there was also a free meet and greet, as a nod to bands who charge their fans to meet them. On the music I can say that for me the faster songs sounded better than his slower work. This simply because Blaze was never known for being one of the scenes most soulful voices. Yet fast bangers like Human came over very strong. A few Maiden songs made it to the setlist and although not owing the albums I do know Virus, Futureal and Man on the Edge. The band was tight as expected and Chris Appleton meanwhile showed he is an underrated guitar hero. So in the end it seemed to me that a full small hall was very pleased with the show and as usual Gebr. de Nobel knows how to keep the spirit up by playing just the right songs before and after the show. Next year I'm back for more Blaze Bayley live.
Posted by erikprogtricolor at 12:25