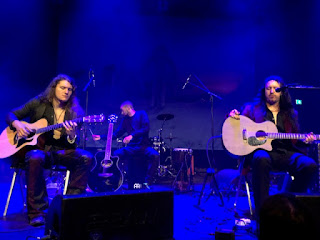 Acoustic metal shows always bring along the question , what to expect? Tonight Witherfall would pass Haarlem on their European tour supporting Sonata Arctica. First setting my ballpark here. Witherfall made a big impact on me in 2017 with their debut album Nocturnes and Requiems. Last year they already released their second album A Prelude to Sorrow and that made it to even a higher position (#3) on my end of year list of favorite albums. In both occasions I dropped the names of Savatage and Nevermore as I believe Witherfall is just the band to fill the gap for people like me who miss those two excellent bands live on a stage near you. The base of Witherfall is made of vocalist Jospeh Michael and guitarist Jake Dreyer. Before the release of their debut album drummer Adam Paul Sagan passed away. A very sad occasion that is reflected in both music and lyrics of their albums. So returning to this evening I was more than a bit curious. Their songs are dramatic and mostly based upon furious guitar solos and screaming strong vocals. Well that can not be done acoustically so now what. In the nineties also driven by MTV acoustic sets became a trend and several bands like Queensryche and Alice in Chains won fans over it. My favorite CD of the time was by Tesla, whose Five Man Acoustical Jam ended up being one of their best albums. 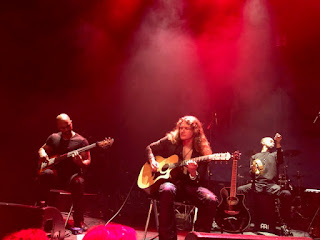 Tonight at 20:00 hrs Witherfall came on and slowly kicked of with the closing song of their last album: Epilogue. Another option would have been opening with The Great Awakening. That song passed by later in the set and starts with the lines: "The Stage was set, noone really knew what to expect". Well let  me not start giving tips on them building a set as I can first give my final conclusion. This evening I witnessed the best acoustic show I ever heard of. So Joseph had to keep the brakes on, but that did not stop him from screaming passionately at times and show us he is one of the best voices in metal nowadays (also with Sanctuary). Jake Dreyer is known from Iced Earth, so I saw him in full swing before, but tonights calm work was beautiful as well. But Witherfall is not a duo far from that really. Now I do not take notes so apart from missing some songs I also lost the drummers name. I am sorry for that as he did add a lot with the many special effects next to his acoustic box drum with hi-hat and bongo. On Keyboards we had Alex Nasla who also took care of backing vocals. On bass Anthony Crawford jazzed matters up at times while he also made sure his salary will be paid at the end of the tour. The best part was that nearing the end their was space for all of them to solo away and break the set even more in an interesting way. While I am now playing the purchased Vintage EP I do recognize Ode to Despair (including an emotional Time Just slips away) and Tom Petty's I Won't Back Down. Note to band: I indeed believe Tom Petty was never as big here as in the States. I only know Refugee as Hans had that LP in the seventies. Highlight of the set was the end though. This medley of Vintage  and Nobody Sleeps Here was as Alex called it goosebumps and right he was. So if they can blow me away like this with an acoustic set, we can only start hoping for a return in full amplified style. Still in the zone I used the opportunity to write fast on a high. I can only close humble by quoting their own lyrics: "We are Nothing, This isn't Real, We Dance in Madness". 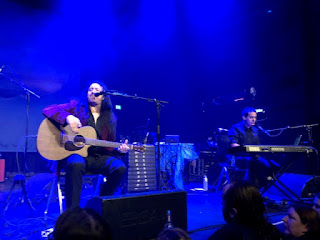