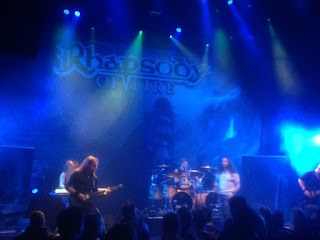 An evening of Power Metal from Italy, Spain and Germany. An over the top experience would be guaranteed and many fast galloping songs where words like sword, fire, sky, master and warrior would be upon us all the time. The evening was best resumed by the guy in the front row proudly holding his inflatable sword up high throughout the evening like the phallic symbol that so suits this musical style. Well that is a rather condescending opening, so let me put some ballpark on me and Power Metal first. In the eighties I did like some of the forerunners of this style. Dio was the band I liked and saw most playing live at the time, I love the first four albums by both Manowar and Yngwie Malmsteen and during my study I was the only one proudly wearing my Keeper of the Seven Keys T-shirt n class. In the nineties I slowly had less Power Metal bands to play and only Angra became a new favorite, but that also because I turned half Brazilian at the time. Now in general Power Metal is not huge in Holland so the amateur anthropologist in me was curious if anyone would show up and what they would be like. Well there were people obviously as Rhapsody of Fire is a big name in the genre. What struck me first was that some 50% of the audience was wearing clothes that had nothing hinting to Hard Rock or Heavy Metal. Many students as well it seemed, plus some Spaniards for the opening band. So ready I was as were the bands, who decided to start even earlier than the announced time schedule told us. 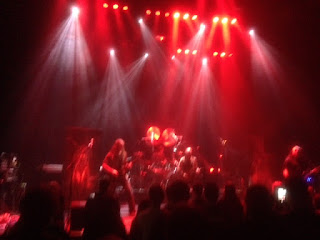 As a result Thornbridge had already started when I entered the hall. These Germans were added on the day of the show at least it seemed like that to me. First seconds immediately brought me back to the late eighties as Helloween was a huge example here. Actually even the vocalist sounded more than a bit like Michael Kiske. Yet somehow he seemed to need very little effort to reach all the high notes. Soon I (and not just I) was under the impression that even big part of the lead vocals were coming from tape. Having your massive choirs on tape I can accept, but lead vocals have to be live. So sorry, but no to these Germans. 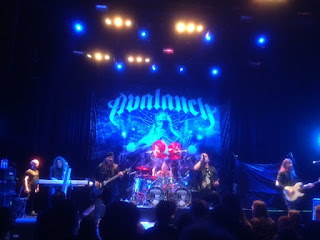 Next band were Avalanch from Spain. Now I had never heard of them before this show and looked them up o the internet, finding they would sing in their own language. I quite liked this touch and was looking forward to upgrade my Spanish. Well that was not going to happen fast as they started in English. A second surprise came when I recognized Mike Terrana behind the drums, going at it like Animal in his best days. Those who don't know his name, you probably have a LP or CD with him playing. Most famous bands he joined were Yngwie Malmsteen, Axl Rudi Pell, Masterplan, Rage and Tarja. This turned out to be a hint to musical level as the band was flawless and the vocalist had a sympathetic stage presence. This band awoke my love for the Power Metal style at once and after the show I did get a CD by them. Unfortunately to them their new album is not out and on tour with them yet, so I got El Ángel Caido (Fallen Angel) with the preferred lyrics in Spanish. Actually there were a few Spanish speaking fans around I saw and when at the end Avalanch closed the set with two Spanish hits, these people became very happy jumping Spaniards. Great show and it got me already in the mood to travel to Valencia with my ex-football team in April. 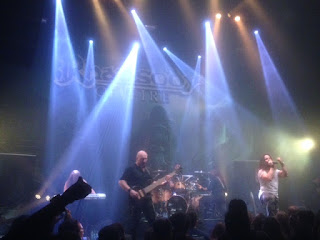 Rhapsody of Fire is headlining this tour and everything just got that extra bit bigger. The stage, the banner, the sound and the presentation. This was a top-class power metal show, ticking all the necessary boxes that come with it. The songs were strong, the performances by all five even better and I was so pleased having followed my rule music over football always. Now I do not know anything of this band in all its versions and forms (They started as Rhapsody and I do not know if there are one or two other spin-offs of this band touring). But who cares when the songs are easy to follow instantly and guitar solo's are thrown at us all the time. As I mentioned this evening made me like Power Metal again, but I had a smile on my face when the vocalist announced that they released their ballad in four languages (halloooo Manowar). In English the Wind, the rain and the moon came over fine, although I would have loved to hear the Arabic version. Playing seven songs from the new album The Eight Mountain I guess I got a good overview of what this band stands for. Tonight they play Holland again in Hengelo (where the Tuesday show was moved to today) Any friends in the east reading this, just go and enjoy this world of fantasies. It made me Happy Metal.