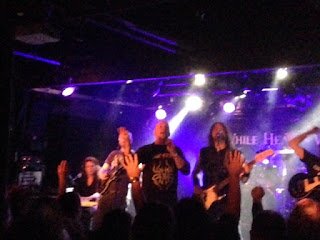 The festival is of course called Dutch Doom Days, but Saturday night I opted for Tech Death in Oss, so it only became the Sunday for me. Actually I was still in doubt in the morning as The Night Flight Orchestra looked tempting to me as well. But as they play summer music and you should see it with a large group of friends over several beers I opted by lack of friends joining and grim weather for the Doom. Well if ever I was rewarded for that choice it must have been today. Through the day bands got better and better, ending with something rather special. I entered late so sorry for Fvneral Fvkk and River of Souls, but Suffer Yourself already started when I came in. These guys from Ukraine/Sweden played their Funeral doom to start my afternoon slow and heavy. Moody enough, but not overly exciting to me. That would change when Dutch band The Spirit Cabinet came on. Their music mixed doom with Heavy Metal. The guitarist at times starting galloping away like he was in Maiden and the vocalist had a pretty wide range staying strong in the clean sung parts. It is only at a doom festival that a band can announce their last song, stating it is a slow one and pleasing the crowd with that. But a strong set they played and one band to keep an eye on. 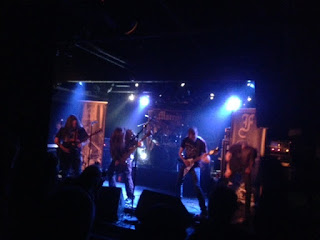 Climbing the ladder further we arrived at Marche Funebre from Belgium. The best of them to me was the fact that they do not stick to one style. They go from very slow to pretty fast doom and that worked wonderfully well I thought. When they almost apologized for playing a fast song they came at the highlight of their show to me. So afterwards I asked them on which CD that song appeared and got that one. Next week they organize their own doom party in St. Niklaas with a.o.Bell Witch and Green Carnation. I am still in doubt, but those like me not sure yet can decide on the day they told me as the venue is big. 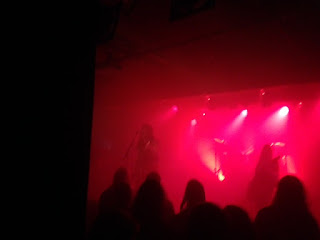 Hereafter Witchsorrow from the UK hit the stage. I read about them in last issue of Iron Fist, but did not know any music of them. Turned out that this trio blends their doom with a healthy dose of NWOBHM of the rougher end. At times I was reminded of Holocaust by the pounding bass and punky attitude on vocals. This set was very good and they managed to keep the curve in performances up for me. Unfortunately when I passed the merch table later on their last CD was not available. I might check it out elsewhere later on as this tasted like more for sure. 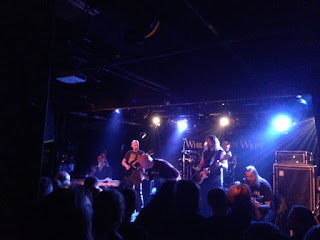 And then it was time for While Heaven Wept to close the festival. Actually this would be there last show ever in Holland and the gods should be crying indeed when seeing what I saw. Rarely before have I seen in Baroeg such a union between band and audience. Now I got into While Heaven Wept when they released in 2002 their Doom Metal Classic album Of Empires Forlorn. This album was well presented in the set still and hearing the full crowd singing along "I Drank Them All Away" was an emotional high for all present I guess. Someone once told me that in the past they blew a gig in Baroeg by being not all that fit. Tonight they reminded us of that and stated hoping they made up for that this time. Well I was not there at the time, but tonight should make up for anything. Than there is Rain Irving on vocals and I guess it is safe to say the best clean vocalist in doom. Supported by a great band his melodies came over so emotional it was close to goosebumps all the time. So when it was over the audience wanted more. The band said being afraid of breaking curfew laws and  not being able to decide if they could play one more. Then the magical phrase came in: "I am Pim, I organize this shit and yes they will play another song". The international crowd went wild and we were treated on a last farewell before I rushed of to just catch my train. While Heaven Wept proved again that it is not always the best bands that get most attention and success. Thanks to DDD organization for putting them on stage in Baroeg.
Posted by erikprogtricolor at 14:05