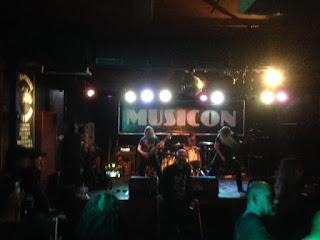 After being sensible and taking my rest made me miss Tokyo Blade in Little Devil on Friday  and Omnium Gatherum in Baroeg yesterday,  I did go to Musicon today for a step into the dark. Not knowing any of the bands in advance my visit paid of as yes we were entertained, So a matinee session in Musicon did look interesting and extreme Death metal would be my Sunday afternoon 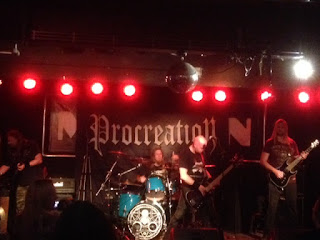 The afternoon opened with Putrefied Corpse from Enschede and they were low, slow, heavy and death. Now the vocalist thought it necessary to ask if those already present were awake. Now bands might ask more of a feedback from Musicon at any time, but waking us all up with guitar solos being all fucked up in the mix is a bit extreme. Yet I liked the energy as usual with Death metal bands, but was not overly impressed with the songs. Hereafter we got Procreation from Zwolle and things would go to another level indeed. This band played tight, but also had good songs and the necessary variation to keep me hanging in there. Instrumentally they were great and when in between songs a nonchalant Annihilator riff was played I realized this band can play indeed. The almost hour they got was filled with good songs and musically Procreation were to me the winner of the day. 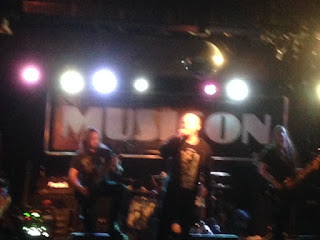 And then there was a headliner Deranged from Sweden. Starting their set the psychopath looking vocalist dove offstage and started to headbutt-light people in the audience. Singing he did as well although some might disagree calling this guttural noise singing. The band consisted of a guitarist raging over 8 strings, a bassist hurting 5 strings and a drummer hammering drums looking like sinterklaas on speed. So yes the band could play and the voice was evil. Yet songs I am still doubting about. Entertainment was not the issue, as I would definitely come back to see this set again. Still there was a bit too much going on to get the full picture for me. So until today I thought Ingested was the most brutal band ever to play the Musicon stage when I was there, Deranged might have just taken that title. So to be honest not music I would get on CD to play on a Sunday morning or any other day. Still the performance was to me outstanding and when they would give an encore if the drummer would get a beer, Ed made our day by breaking that record as well and we could one more time just look amazed towards the stage. Different, yes let's call it different by lack of better description.
Posted by erikprogtricolor at 21:54