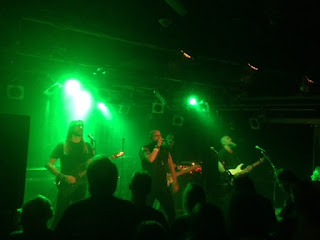 Sorcerer playing Dynamo and Hans and I knew we wanted to be there. Sorcerer play doom metal. Now Doom is a many faced beast. Sorcerer play the kind most blended with Heavy Metal, always counting on strong vocals, heavy but not extreme slow guitars and bass all filled up with guitar hero soloing (say Black Sabbath in the Ray Gillan/Tony Martin years). Like many of their Scandinavian colleagues as Candlemass, Abstrakt Algebra or Krux, they perfected this style and gave us recently two top-class albums. Now it is autumn the perfect time of year for doom and festivals and tours in that style are all around us. Yet when arriving in Eindhoven at the station things were quite the opposite of doom, where glow in the dark gave many colorful projections on buildings. We crossed as fast as possible through the masses to make it to dark Dynamo. Upon arrival it did not look all that busy and we remembered a certain Slayer was saying goodbye to Holland in Zwolle this evening. Interesting enough that show sold out in minutes/hours, while some years ago you could still decide on the day if you felt like seeing Slayer live. But for us doom it was. 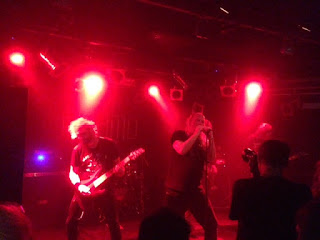 There was an opener as well in Officium Triste from Rotterdam. Now Rene who drove and merched for them in the past told me they exist next year 25 years, yet I never saw them before. There is an explanation for that. It is only the last three years that I have time to spend on shows as much as I like. Before that work trips and family demands made me focus only on favorite bands. So bands playing doom as slow as Officium Triste might be missed by me unless supporting names I knew. Well I can say that now I saw them live I will go and see them again when opportunities arise. This was SLOW and HEAVY and the voice grunting as slow fitted very well. Now I was not the only one in the audience unfamiliar with much of their work, as they decided to play in their short set three new songs from their upcoming album. I will keep an eye on any release party as this was good warming up.  Close to the end vocalist Pim thanked us for not going to Slayer tonight and I realized I saw him last year guesting at Clouds during Dutch Doom Days. A beer a new stage and Sorcerer to come. 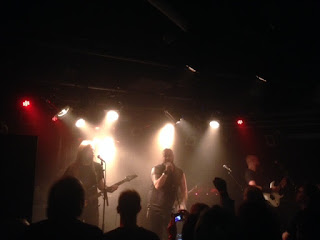 The basement hall meanwhile filled up decently and when Sorcerer kicked of it was clear we were going to be in for a treat. Sirens opened the evening and when we were asked to shout along hey hey hey, it was clear this would be more of a Heavy Metal show. No problem to me as I love the style of metal Sorcerer gave us. Now I have to admit that I did not hear of Sorcerer when they founded in the late eighties. They made a very strong return over the past years releasing "In the Shadow of the Inverted Cross" and "The Crowning of the Fire King". Today's set would visit both albums and some songs from the past. As I do not recognize all titles I can only state that the encore was The Sorcerer and probably the highlight of the evening for me was Ship of Doom. Commenting on the band I can only say they were as good as hoped for, including the substitute bass from Canada. Somehow vocalist Anders thought he was an old man using it as an excuse at times. I had the impression half the audience were at least as old as him. Good voice though and even if the mix was not always extremely clear I saw and heard a good band, which presented another highlight of 2018 for me. So now I am in for some more doom and while playing Abstrakt Algebra now checking gig agendas. Due to strong competition next weekend still undecided on Dutch Doom Days. Yet I hope to feel like driving down to Darken the Moon in Belgium 2 December as Bell Witch playing Mirror Reaper in full and Green Carnation headlining sounds very interesting indeed. Give me more Royal Epic Doom, just like the killer tee said.
Posted by erikprogtricolor at 10:24