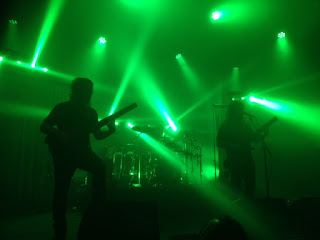 Beyond Creation are probably my favorite Tech-Death Metal band. I saw them twice live before have their albums and new release Algorythm only confirmed this status to me. To increase the fun they are bringing Gorod along probably France's finest. Now Beyond Creation and Gorod have to me something in common. Both bands I saw for the first time live when they were supporting Obscura in Patronaat on different tours. The result however was the same, they both blew Obscura off the stage and got me running to their side of the merch stand. So in spite of fierce competition this evening in nearby Baroeg, Musicon and the Boerderij I decided not to stay near home and drive for the first time ever to de Groene Engel in Oss. This turned out to be a nice venue. Contrary to all these new build places this is an old building. where the hall floor is similar to any corridor or toilet in old dutch houses and the stage is large and high. What I did not like was the time schedule starting at 20:30 with four bands and a long drive back home ahead. They partially made this up with the fastest stage swaps I ever saw and gaining in the end 20 minutes on the announced schedule. Finally the entrance had a nice bar, with upon my arrival the usual suspects from PPE in there. So socially it became a nice evening as well. 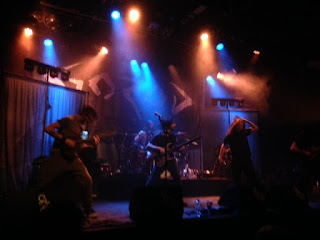 Opening the evening were Brought By Pain from Canada. Now I sometimes don't read anything on support bands, just make sure I arrive on time to see them. So it was a nice surprise when entering the hall I thought hey I recognize these guys on bass and guitar as they are from Beyond Creation. This meant some sort of quality stamp as I immediately liked the band. Most attention however was drawn by the other guitarist who was enjoying himself with apart from instrumental also some facial acrobatics. The EP I got afterwards tells me his name is Olivier Bourbonnais Allaire, which sounds as drink they had on their way in. Further the vocalist was very pleased his fucking father was in. The set was short, but I felt that for an opening band they went down very well with the audience and they deserved that. So we opened with a winner 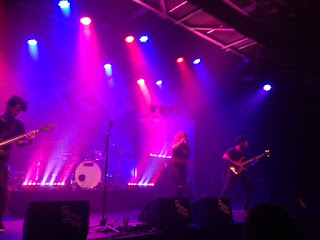 Next band were Entheos from California and Texas. A female vocalist that grunts is nothing new, but always a nice surprise. Somehow she needed two microphones. One to grunt around the stage and one for special effects. Opinions were divided on that second one, as the effects were to me somewhere between black metal and cartoons. On an evening like this playing by all on stage is not an issue and for Entheos the same high standards were reached. Outstanding man in the band though was the bassist. The way he slammed his bass like there was no tomorrow was interesting to observe and this was probably total bassturbation to some. So again a good band, although the songs did not impress everyone completely. I just liked watching what was going on. 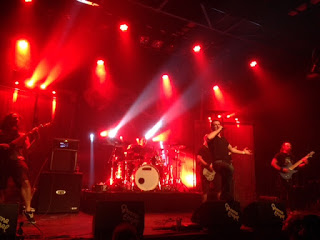 Gorod are French, but they can do nothing about that. Now I watched the news before leaving home and saw the in fashion thing in France these days is wearing a yellow vest and break things. Luckily Gorod would  have none of that as I guess that when filling up the tank in Holland they found prices in France are not that bad after all. Since seeing them on their A Perfect Absolution Tour I follow them, but do not get all their albums. I think they come over better live as on stage the vocalist Nutz is definitely a strong force, while on CD I find his more screaming side harder to appreciate. The set they played was of headliner status and performance though. Last time I saw them was last year when they joined a Thrash Metal package and were a bit lost before that crowd. Now they were fully at ease and we got performance wise possibly the best show of the evening. This again was helped by Nutz with his occasional dutch lines in between songs. Gorod proved to me they are among the Tech Death elite as well and the hall appreciated their show big time. Horns up mes amis. 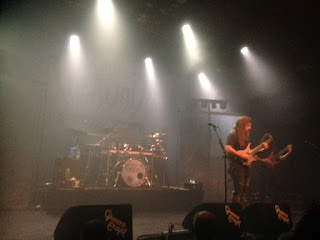 Beyond Creation released recently Algorythm and on this tour they decided to play that album in full kicking off their set. As I played the album many times I was pleased with this decision and it was time to get amazed again. I just love it how they go from the very heavy Death metal to a mass fingerpicking over 8 string guitars and 6 string bass. The trick is they make it look all so easy. The song that describes best what I mean is probably the title track. This song is a heavy monster, moves to a great solo and bangs on. Then we suddenly drop to a clam part where Simon's solo makes me think of the instrumental ballads Marty Friedman or Jason Becker brought us in the eighties, just to break and move on fast again. Now I mentioned Gorod as possible best show and this has only to do with what happens in between songs. Beyond Creation are not a band for talking, they literally let the music do the talking. Yet I was in constant awe as this is exactly how I like my technical extreme music. After the album finished we had some time to visit the past with Earthborn Evolution and Omnipresent Perception. For that last song a circle pit was demanded and a small one was presented to them. And then it was over, but Beyond Creation would come back for one more neck breaker in Fundamental Process.  Now really at the end we could go on the picture with the band and drive home. Thanks to all bands, but especially Beyond Creation for giving us another highlight of the year. 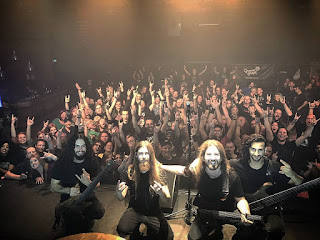