It is 2018 and these four CD's brought me straight back to the eighties. Three times because of the style of music played and one rather late return (29 years waiting) of one of my favorites of the decade. 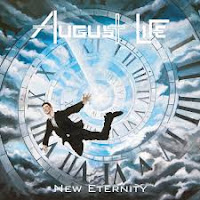 August Life - New Eternity
August Life are a new Dutch band of not so new Dutch artists and I think it is fair to say they are the best release of traditional Heavy Metal coming out of the low countries this year. So they won't win the originality award, but anyone into Heavy Metal should like this. Opener New Eternity reminds me of Graham Bonnet era Rainbow. Draw the Line has Dio references more than just under the surface. But when it all is played this well, who cares really. So a new band plays music from my youth. Actually I can't wait to see them at Westland Metal Meeting next year and shout along  "A Mission to Kill" during Immortalized. The band so far was a duo, but that must have been sorted for life shows now they confirm same. Classic Heavy Metal ending with Nevermore, which seems to be a tribute to the late Warrel Dane. Holland has a new Class act  in Heavy Metal and this is the first release by new label pt78 records. Promising start I'd say. 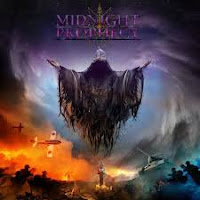 Midnight Prophecy - Midnight Prophecy
I tried to see Midnight Prophecy twice this year, but bad luck got in the way and both gigs were cancelled. Still I was keeping an eye open for their autumn released self titled album. So this is again eighties metal and yes they must have heard of Iron Maiden. But again a young British bands shows us that there is a Now Wave Of British Heavy Metal indeed. Ten songs giving us over an hour of good old Heavy Metal justifies at least checking them out. They now even released a Videoclip for Obsidian so YouTube might be a good starting point. . 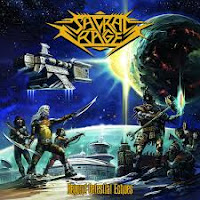 Sacral Rage - Beyond Celestial Echoes
I originally missed the release of their 2015 album Illusions in Infinite Void. Then Mario put them in Little Devil, I checked them out on the internet and found a new favorite band. These guys are Greek but play US Speed Metal from the eighties. References are Agent Steel or Watchtower at times. The lyrics are high tech sci-fy story telling again, but the music is just brilliant. So yes I love the high pitched vocals with the screams, the fast guitars and the songs. Sacral Rage manage to not just show off how good they are, but pack their music in great songs. I saw them live on stage and they blew me away. Expectations were high for this album and no they do not disappoint. I'd say come back to Holland soon. Finally I bought there mint green EP last year due to lack of CD version of Deadly Bits of Iron Fragments. I now just read that all version on vinyl of this new album are selling out fast. This must mean the army of followers is growing, or they are too modest not pressing enough LP's. End of the year list material at the higher end. Heir Apparent - The View From Below
So after three bands playing a style of metal I love, I now arrive at one of the albums I have been looking out for a lot after hearing it announced. Heir Apparent released in 1986 Graceful Inheritance and that is definitely (one of) the best US Metal releases ever. Three years later One Small Voice followed one of the best US early progressive metal albums. Now I buy my CD's from bands or websites, so before I received my copy I did read several reviews. Turned out that many Power metal related sites love the new album, while Aardschok and Metalfan in Holland seemed somewhat underwhelmed. I do not follow Dutch opinions here, as I love the album. OK so the tempo is mostly mid or slow. When they actually hit the gas and bang fast in Savior the song is also over before you know it, Yet this mainly mid-tempo album for me gives the band the chance to shine on their strong points. Starting with new vocalist Will Shaw who with this album alone proves he is one of the best voices in metal. At the same time the guitar of Terry Gorle gives us beautiful melodies all over the album. In The Road to Palestine we even get Heir Apparent's answer to Kashmir or Stargazer. So no this is not as fast as the debut, nor as prog as the follow up. Yet for me it is three out of three for Heir Apparent a band that only releases brilliant albums. They will tour Europe next summer, let me not miss them again.
Posted by erikprogtricolor at 21:19