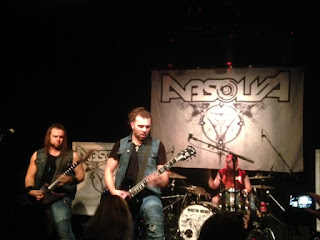 Absolva definitely is one of the hardest working bands in metal. Only a few weeks ago I saw them opening for MSG and every year they undertake long tours. This evening they would stop at de Nobel in Leiden for a headliner show and Hans and I decided to be there, with Pieter joining in later on. With their constant touring they slowly are building a fanbase. Yet the competition this evening was fierce. On national level the Kreator / Dimmu Borgir package took some metal out of the region. At the same time nearby Boerderij had Thundermother with regional support Rosie. That last show was even free for those attending the Dead Daisies earlier this week. Anyway we might have not been with many it was no disastrous empty venue either and we were vocal. 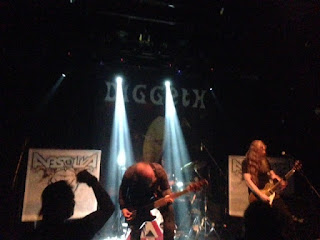 Opening band was Diggeth from the east of Holland. I saw these guys a few times before supporting or at HMM. They play straight forward hard rock with some stoner influences. Actually the psychedelic instrumental song was a high of their set. This band fitted well although I got a bit worried during their opening song 3 gringos. I clearly heard them sing today is a good day to die. Well those living by Absolva rules know it's never a good day to die. But we got warmed up and ready for the headliners. 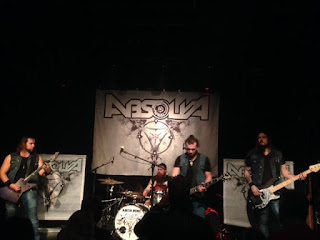 We are Absolva and we live life on the edge! And we were back again at an Absolva show. With a full set contrary to earlier this month we now got a fair part of last album Defiance. Yet their ubersong to me remains Never Back Down. The ballad from the debut Only When It's Over was introduced with a long melodic guitar solo again and I swear the spirit of Gary Moore walked the stage at that very moment. Absolva just did what they do and very good too. So I guess that all those present shall see them on tour again when returning to Holland. The band themselves shall be back in Leiden with Blaze Bailey 1 March already. We ended up with an evening of Heavy Metal as it was meant to be and de Nobel gave us an extra hour cooling down, playing some classics for us. Great evening thank you.
Posted by erikprogtricolor at 10:39